Once a month, for 2017, it’s my goal to do a day-in-the-life post to document our year and the changes within it.  The moments that seem boring or ordinary now, I know I will want to remember down the road.  You think you will remember it all, but you don’t even remember most of it.  I learned that as I created our 2016 family album. Photography isn’t just for capturing those iconic moments – birthdays, awards, holidays, etc.  It’s for freezing in time the snotty noses, the grubby hands, and the chubby cheeks that we take for granted every day.

I have found a small group of photographer mamas that feel the same and we’re doing a blog circle once each month, so if you would like to see more like this, head over to my friend, Jen Vanderby’s blog and check out her daily life with her little guy 🙂

Sunday morning began with the typical 7:20am wake-up cry from down the hall.  It was mom’s turn to get up, so I scooped you out of your crib, grabbed a bottle, changed you, and settled down with Netflix playing quietly in the living room.  I can’t bear the kiddie cartoons, and I don’t want you watching what I would prefer, so we compromise on teenage soap operas. 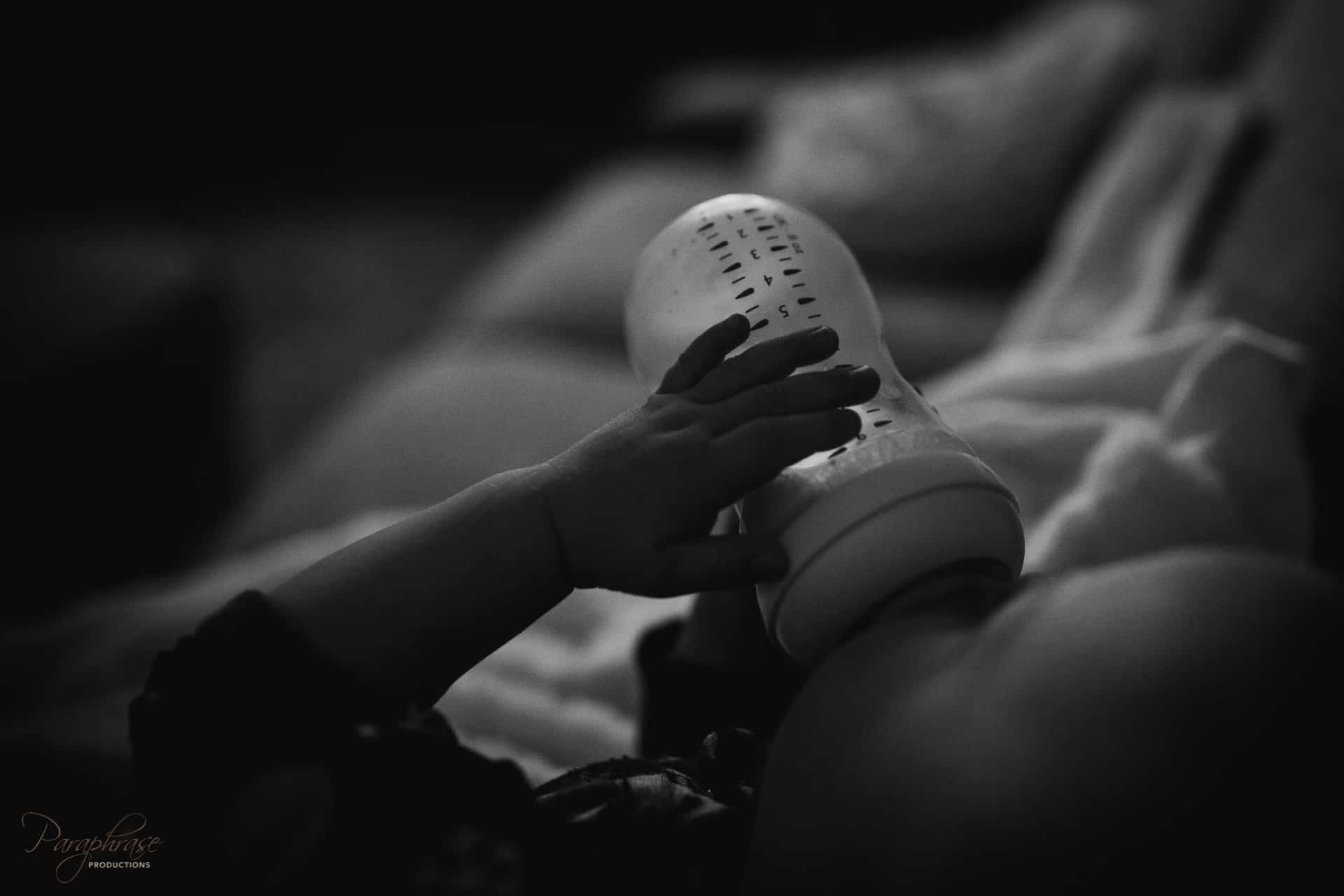 You are more prone to cuddles when you’re under the weather, but even then you won’t stay in our laps for long.  You worked on your second bottle on the floor in between glancing at the show and playing with your toys.  Mom crashed on the couch and watched you keenly for the first sign of an eye rub or an attitude that would indicate you were ready to go back to bed. 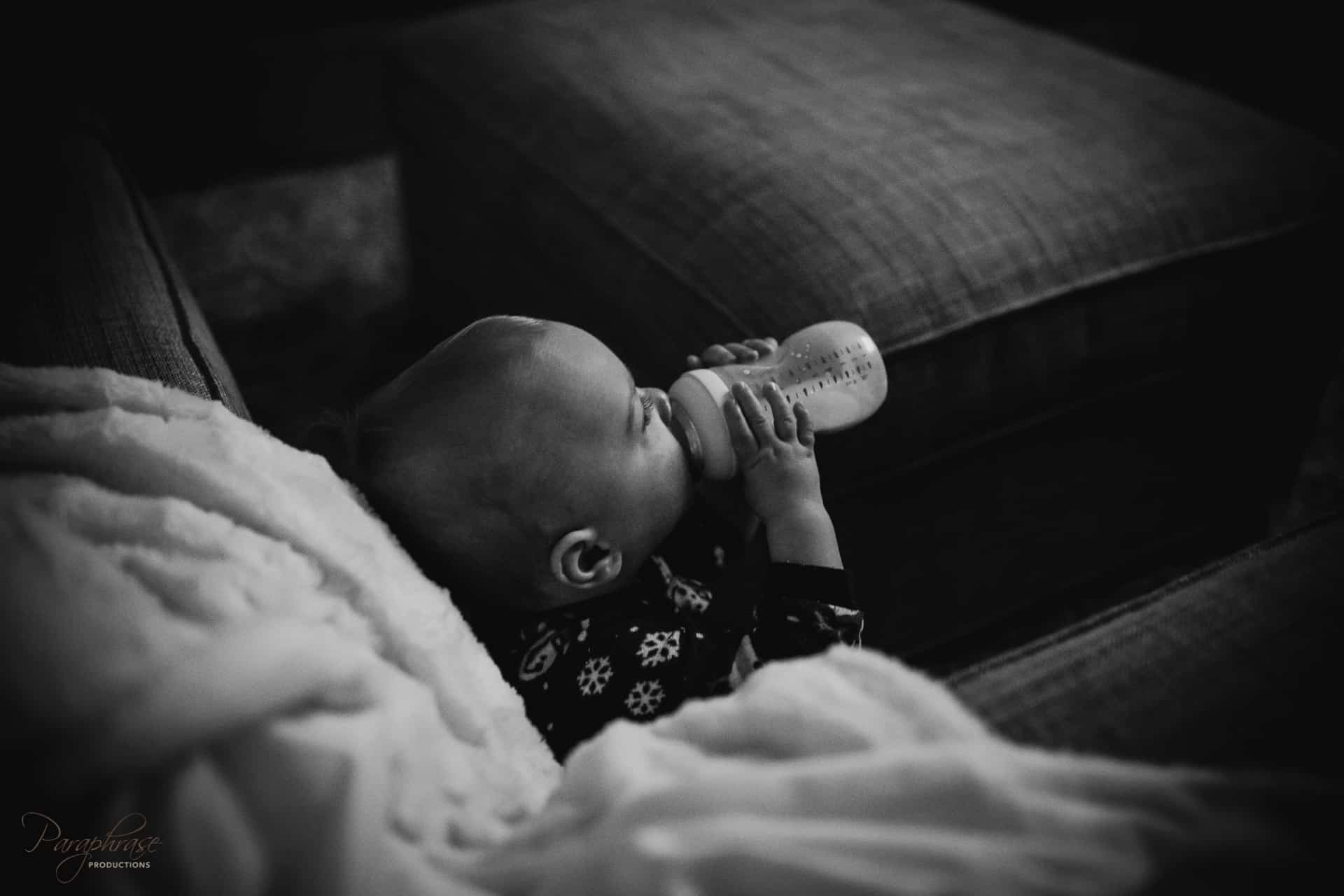 You usually take about an hour to tucker out, and sure enough, by 8:30am I was placing you back in your crib and crawling back under the covers myself.  Daddy left for work / church shortly after this and you continued sleeping for not 2, but 3 solid hours.  I even had to go and peek on you to make sure you were alright.  I snuck downstairs to make a phone call in order to not wake you so that your little body could get as much rest as possible to combat this nasty cold. 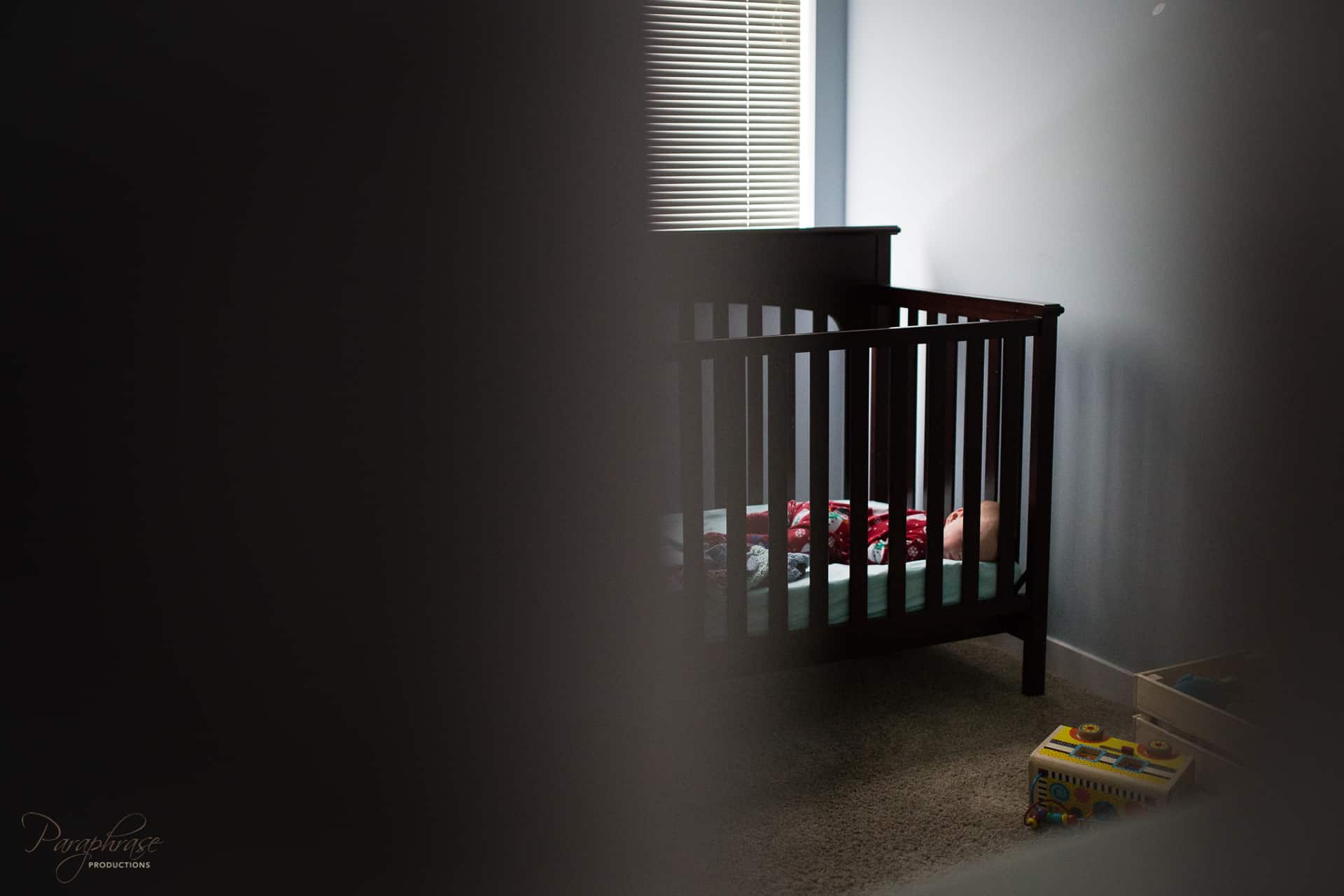 And of course, as soon as I started to try to be productive, I heard your cry echo down the halls.  I made you another bottle to tide you over while I got ready, and we went and hung out in mom and dad’s room.  You explored under the bathroom sink and enjoyed your usual disorganization of our sock baskets while mom straightened her hair and got dressed.  A few extra whiny cuddles were required to get you through such a boring process.  Be glad you’re a boy, son.  You have a whole lifetime of splashing water in your hair, uncrumpling pants, and calling it a morning. 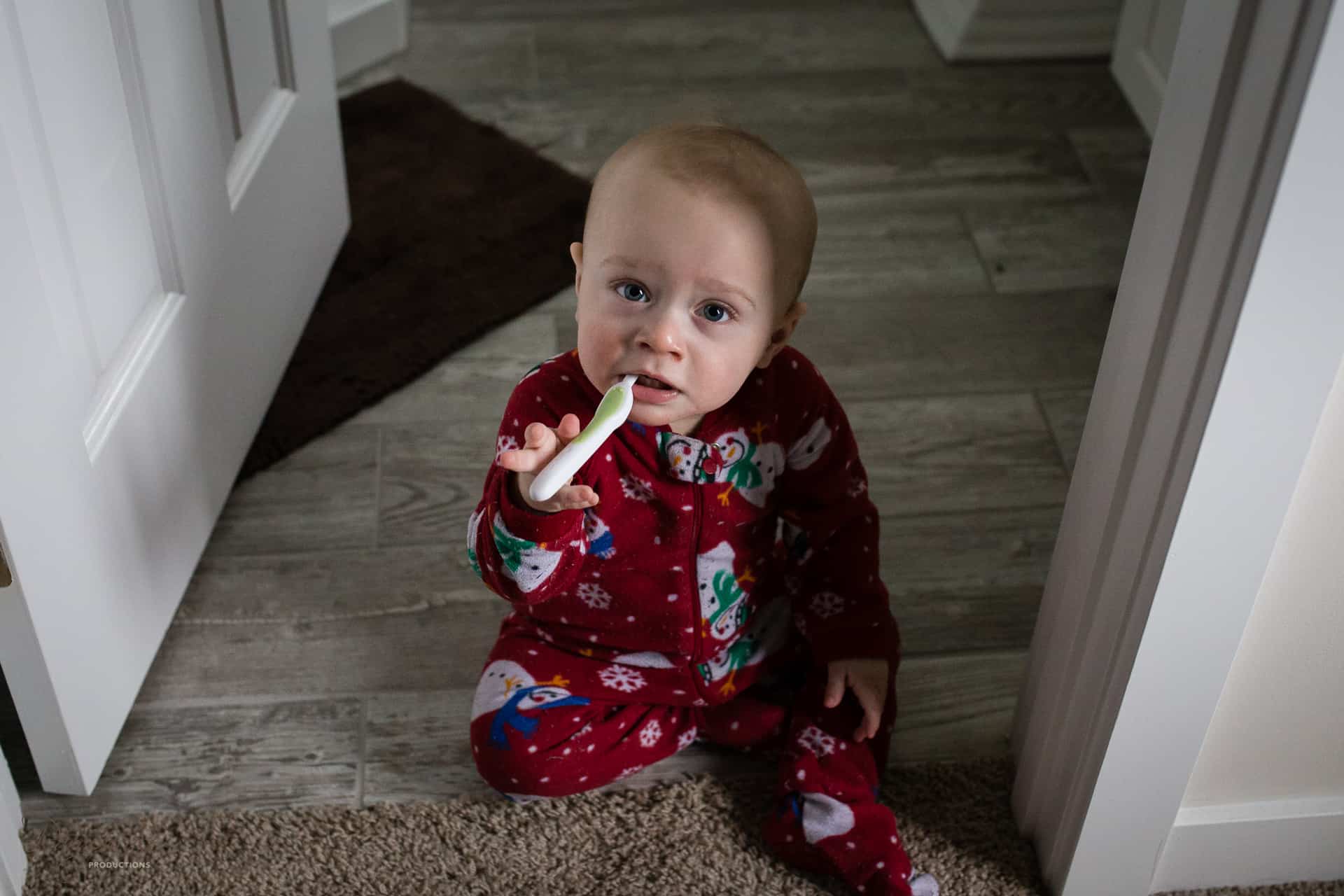 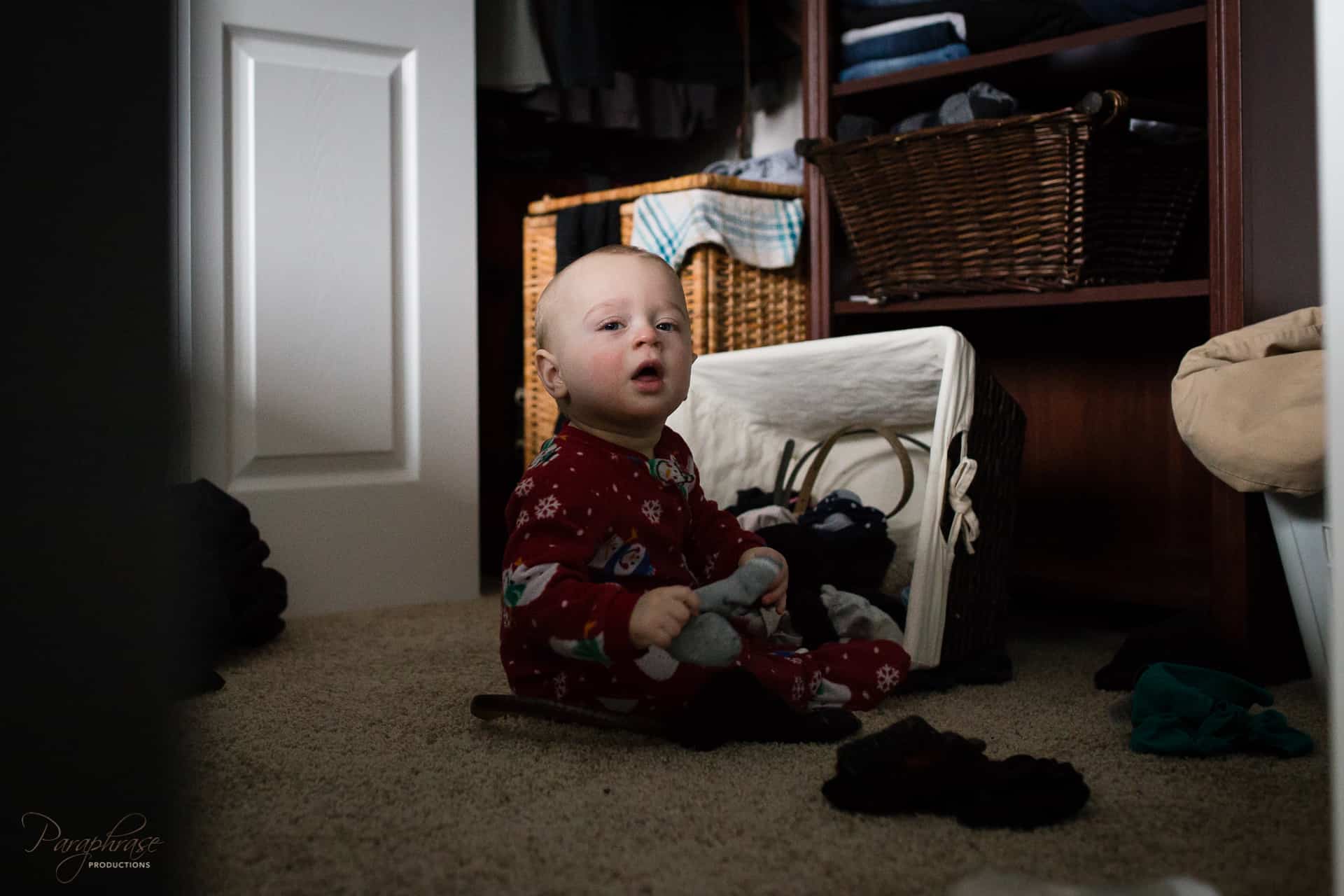 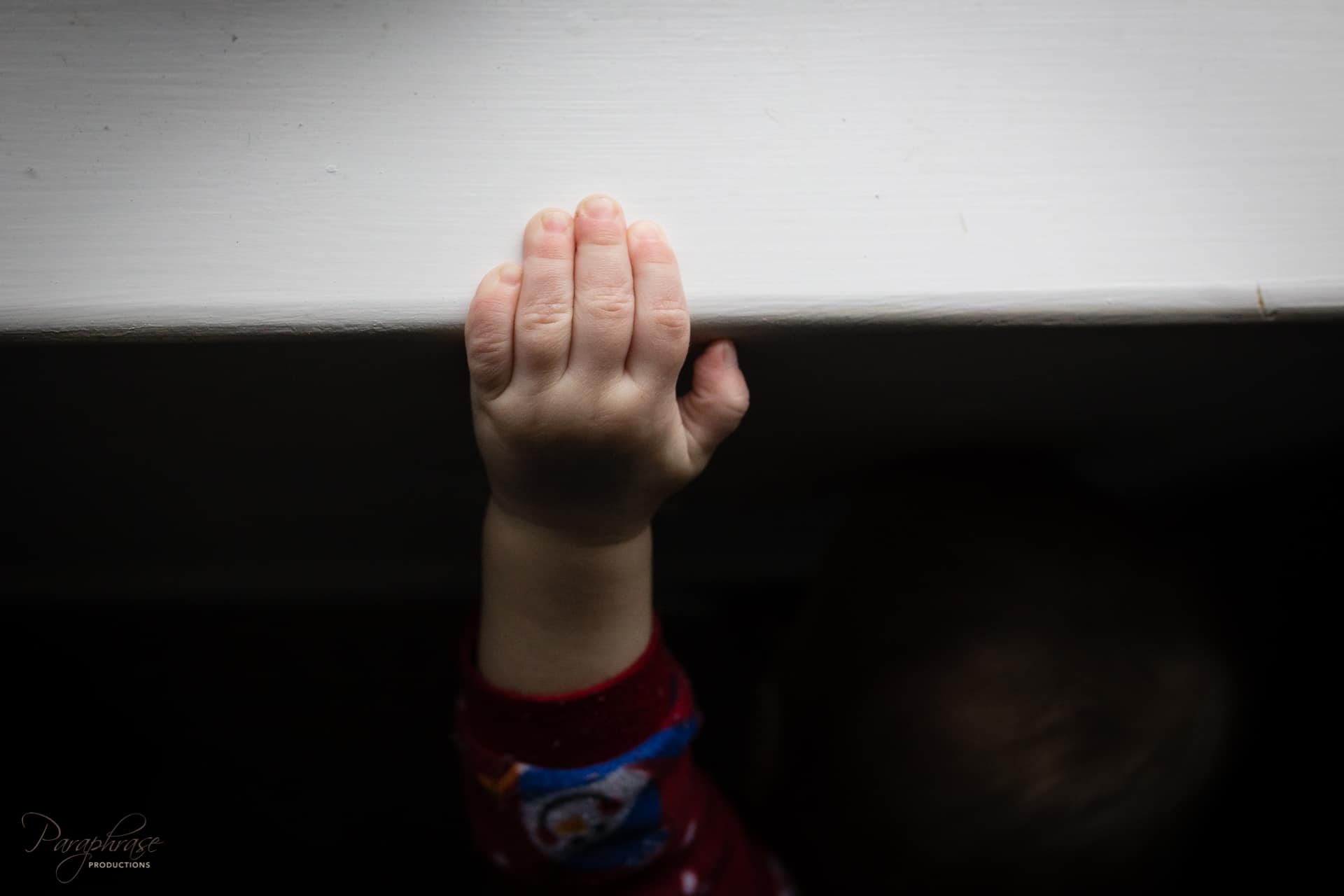 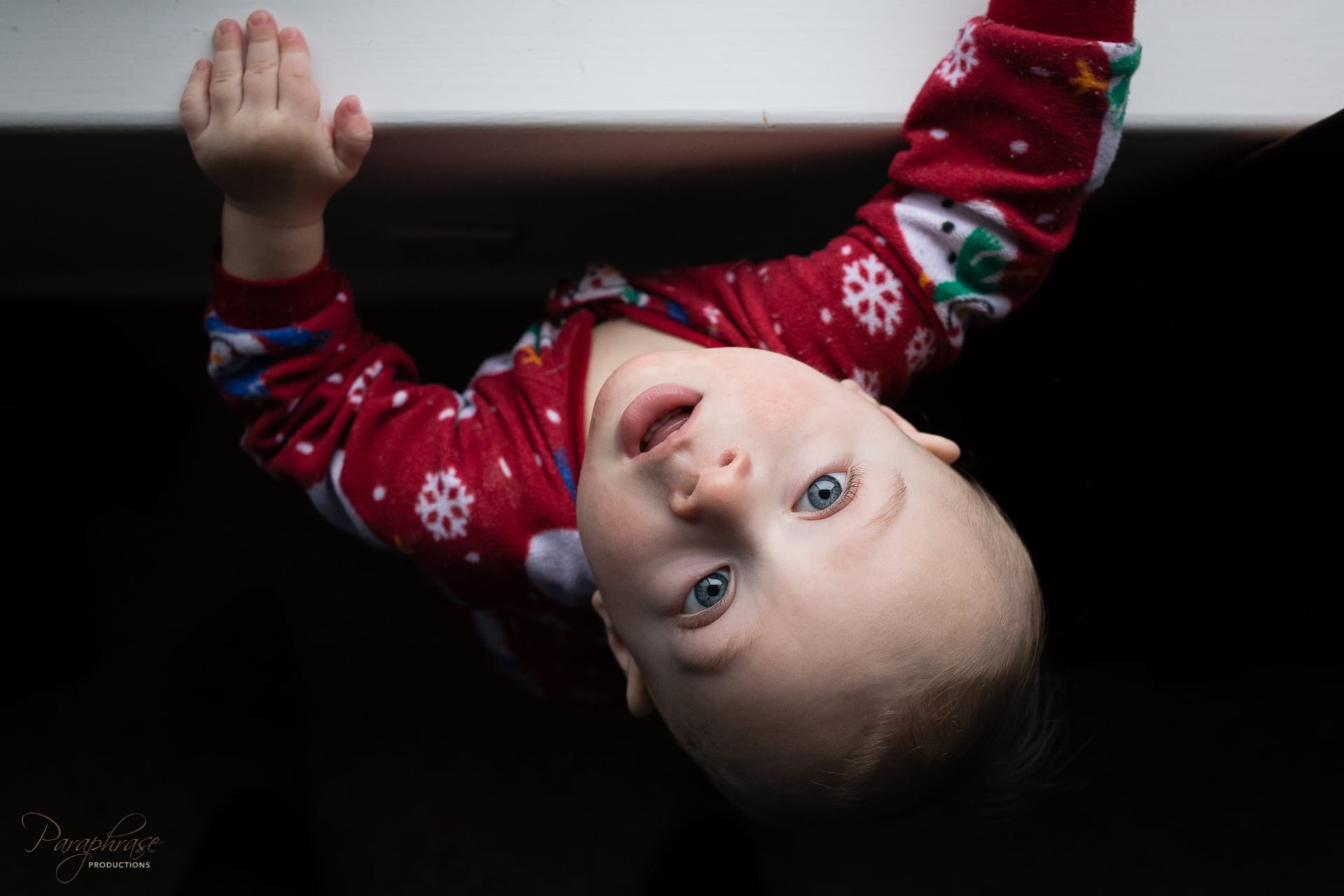 Once mom was ready and had tidied up all the little messes you created while she was doing so, we headed out to the kitchen for your staple breakfast.  Daddy finished filming all the sermons and called in to see how we were doing and to let us know he would be a little later as he had some errands to run.  Mom used the convenience of you being trapped in your highchair to tidy the kitchen, make some toast for herself, and even a latte.  You eventually got bored and played with the recycling for a bit while mom finished throwing some ribs into the crock pot for dinner that night. 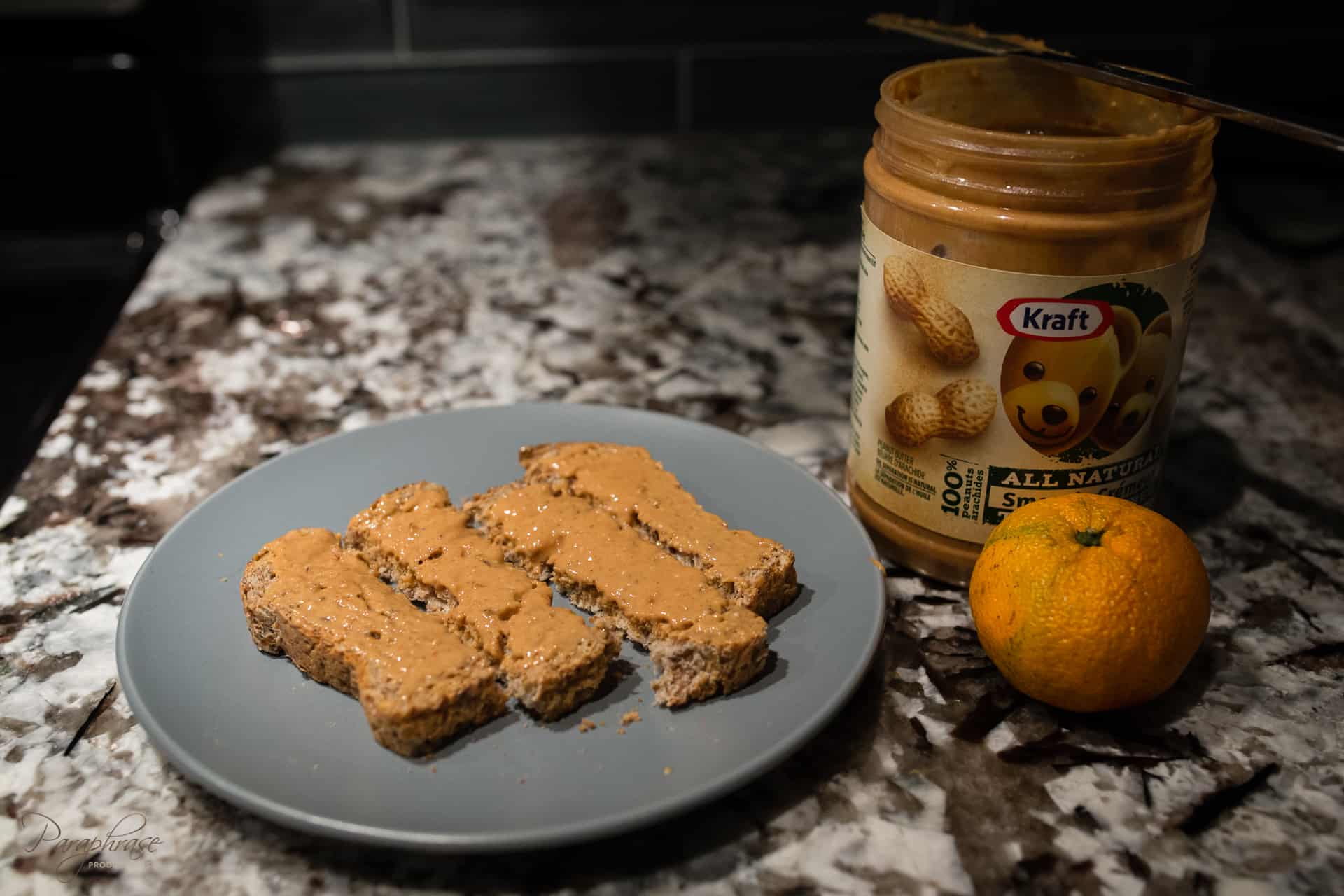 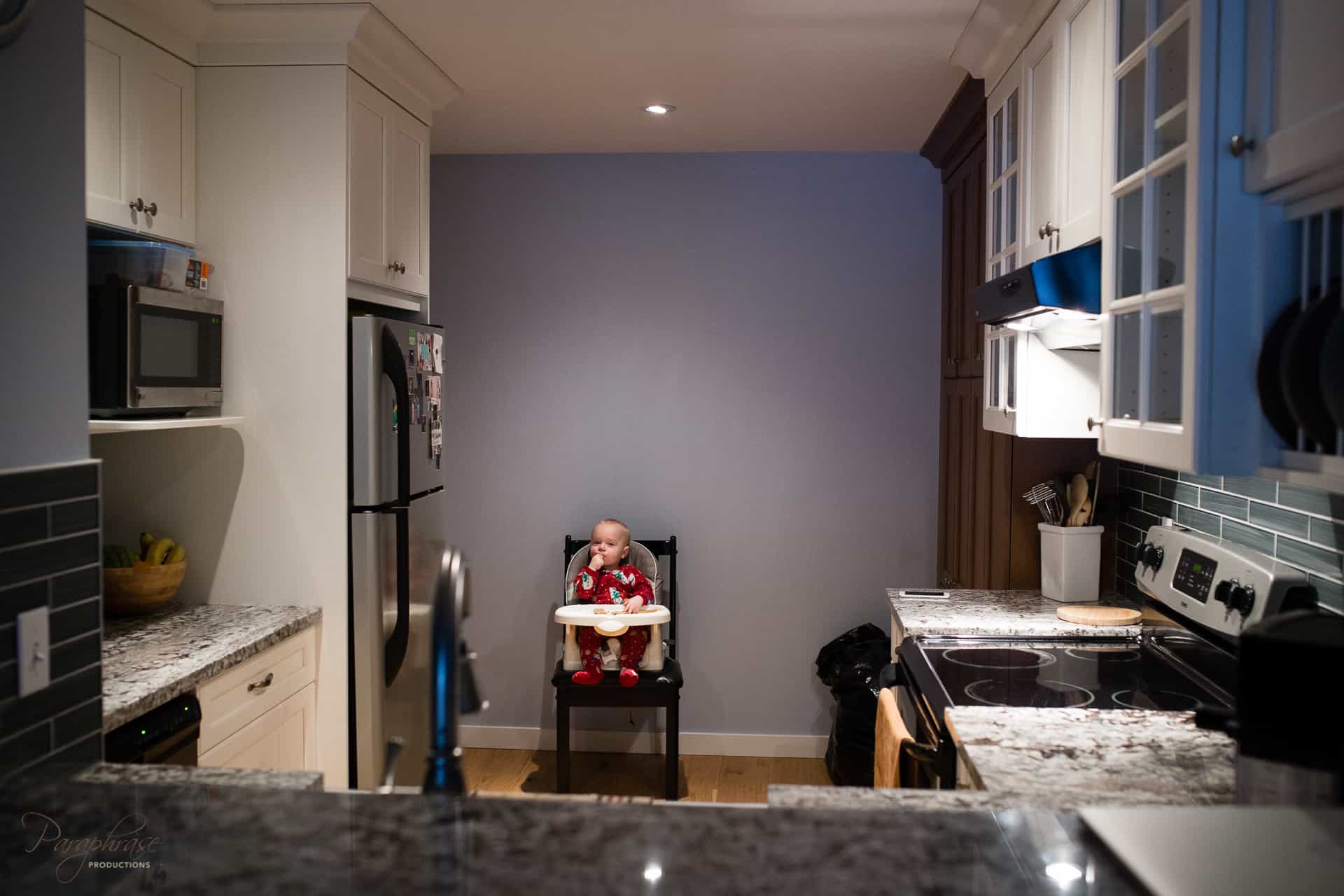 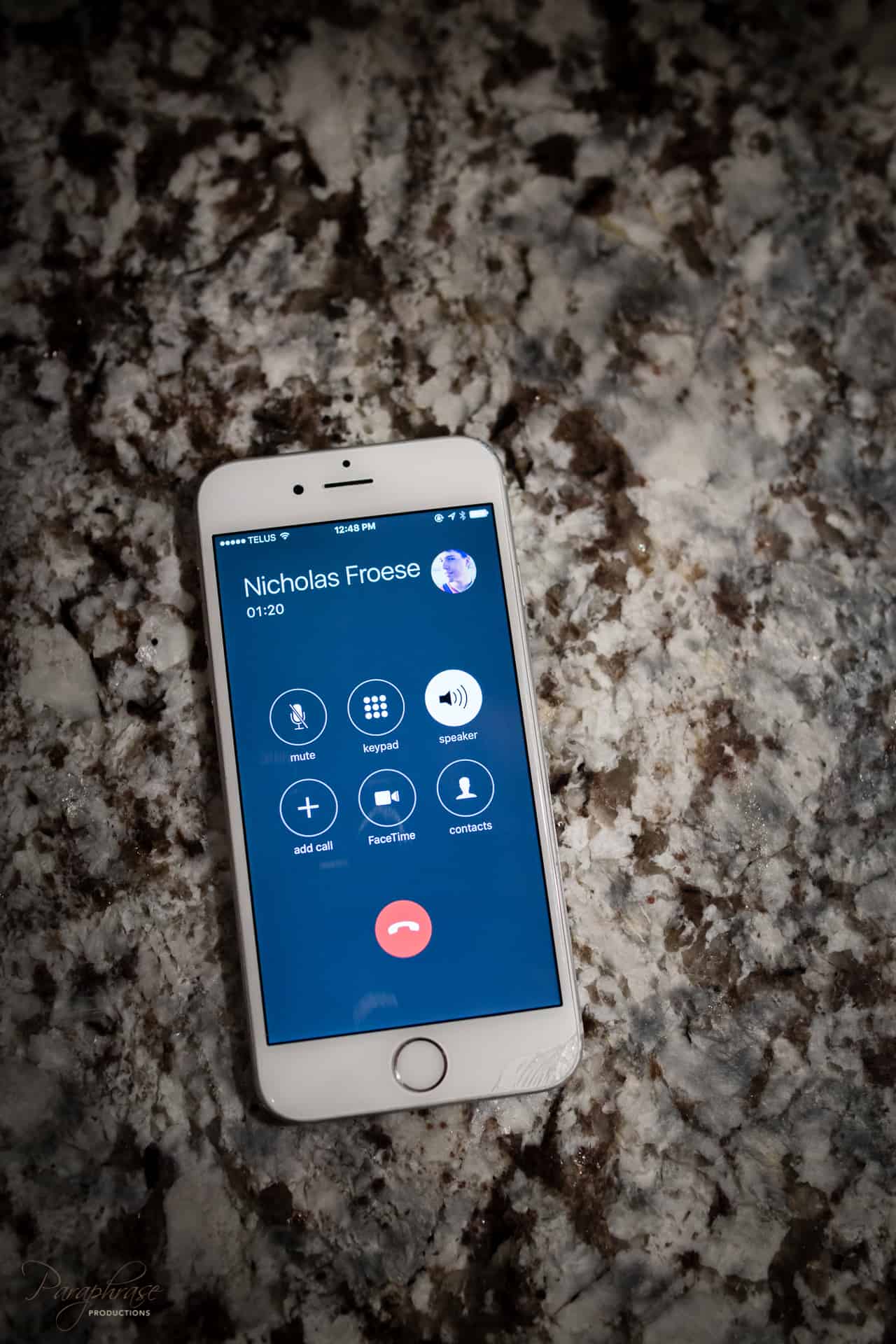 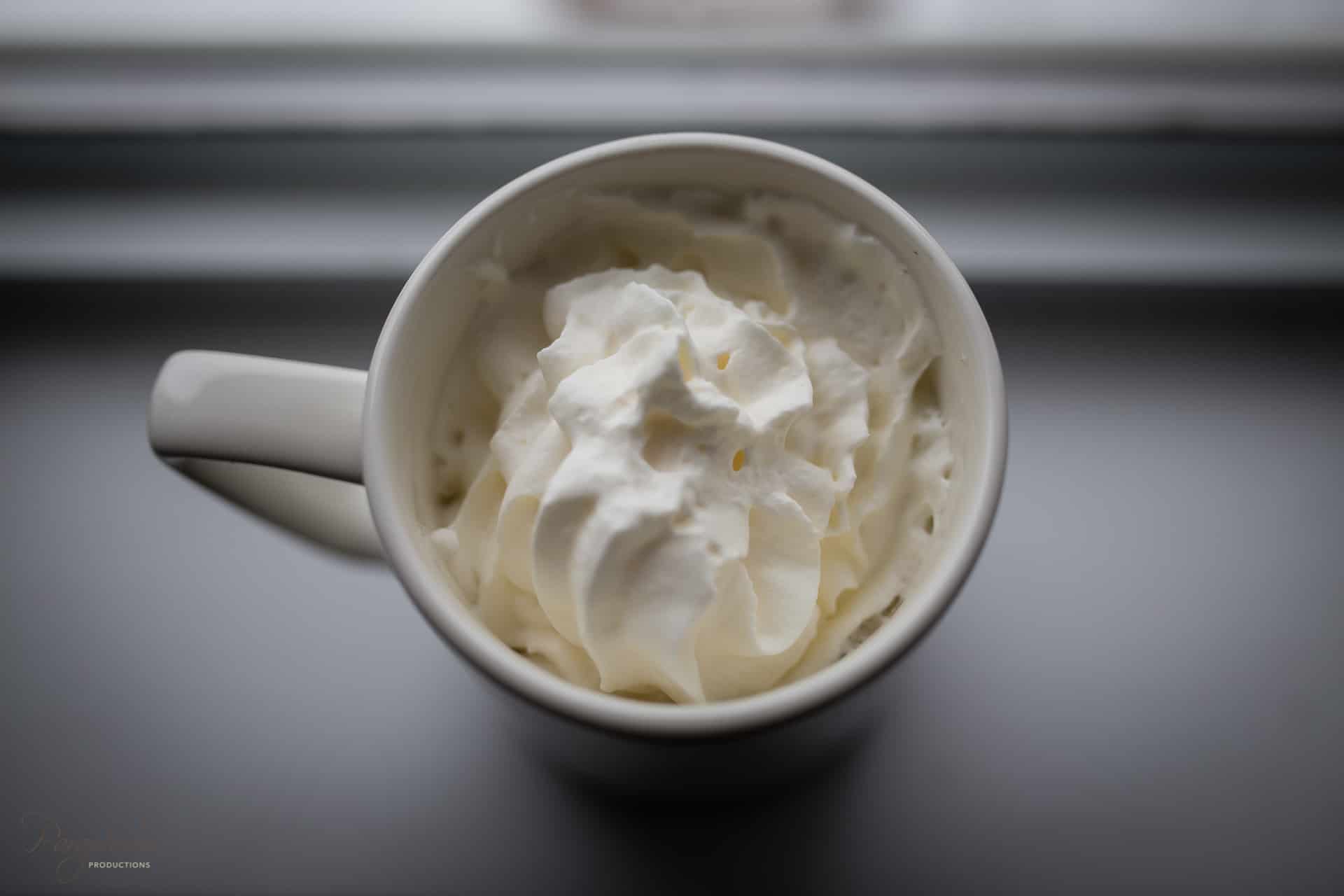 You seemed to be feeling slightly better this morning as you were more content to play by yourself while mom had her coffee, but of course, you still had to come over and say hi to make sure she wasn’t drinking anything you should also have a part in.  After a little while of lifting you up and down from the couch each time you decided to play with the blinds you know you are not supposed to, your attitude started to deteriorate.  You’re such a little sleeper and can barely be up for more than 2-3 hours at a time when you’re not sick.  It was 1:30 by this point, so mom popped you back in your crib and headed downstairs to work on finishing her 2016 family album. 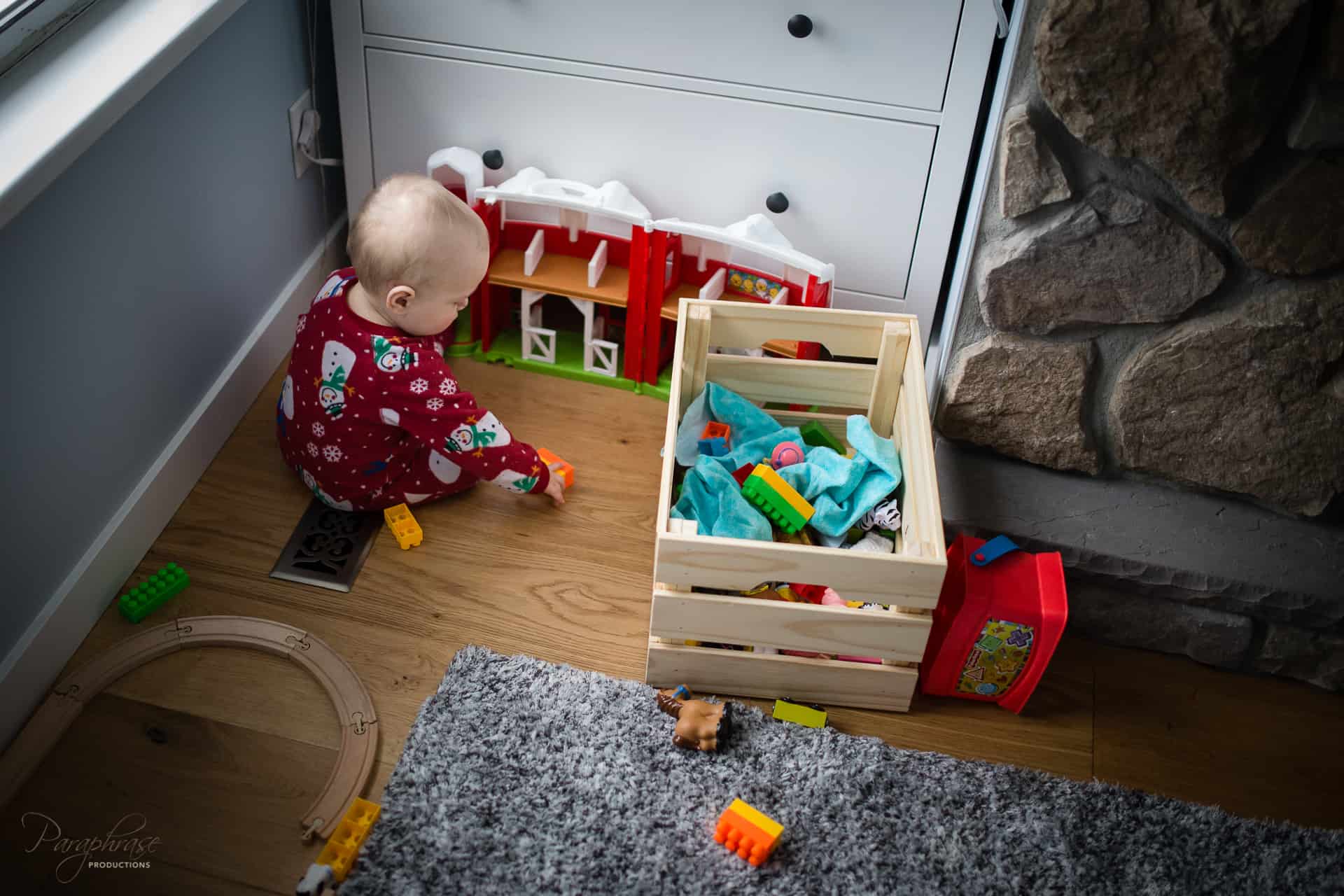 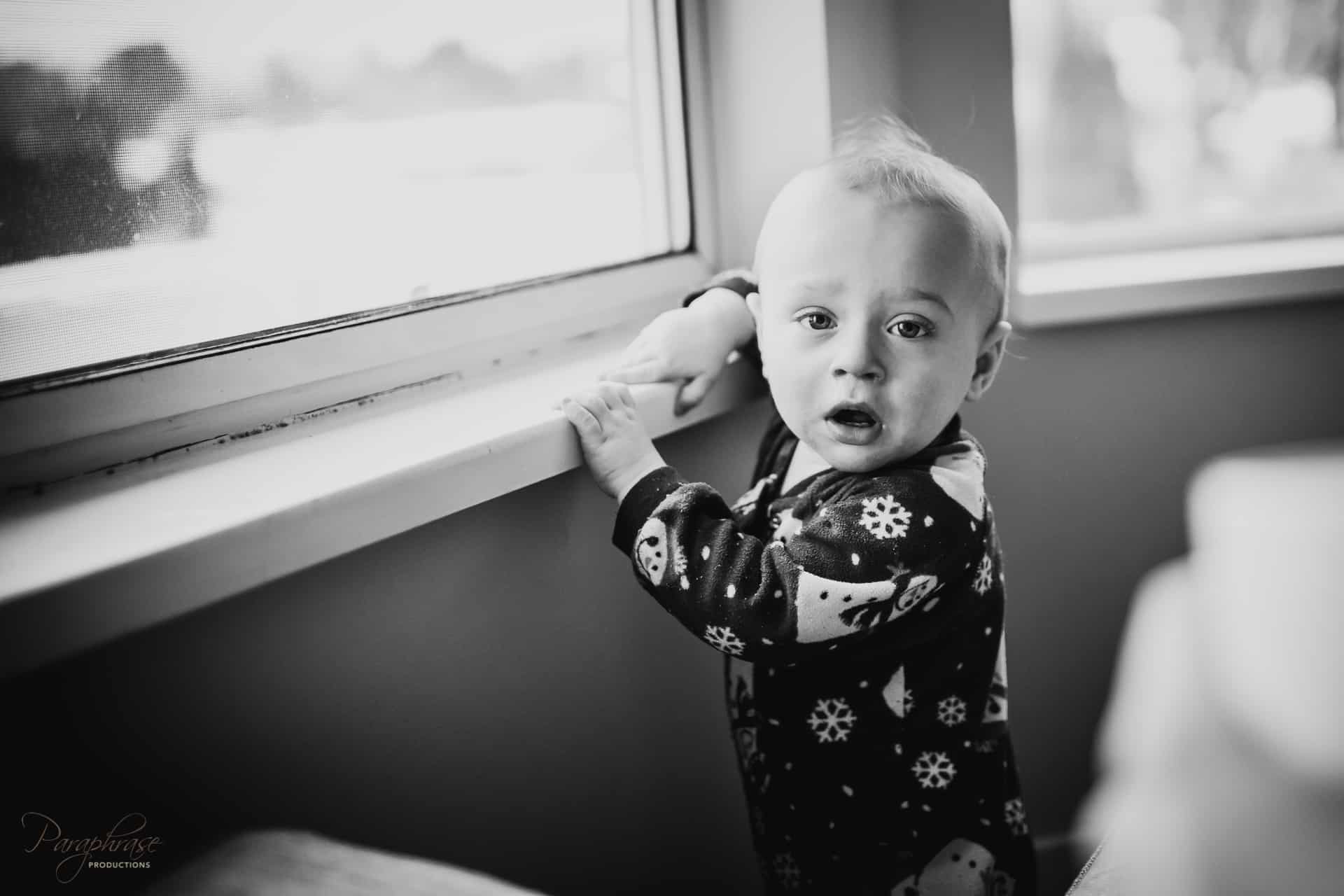 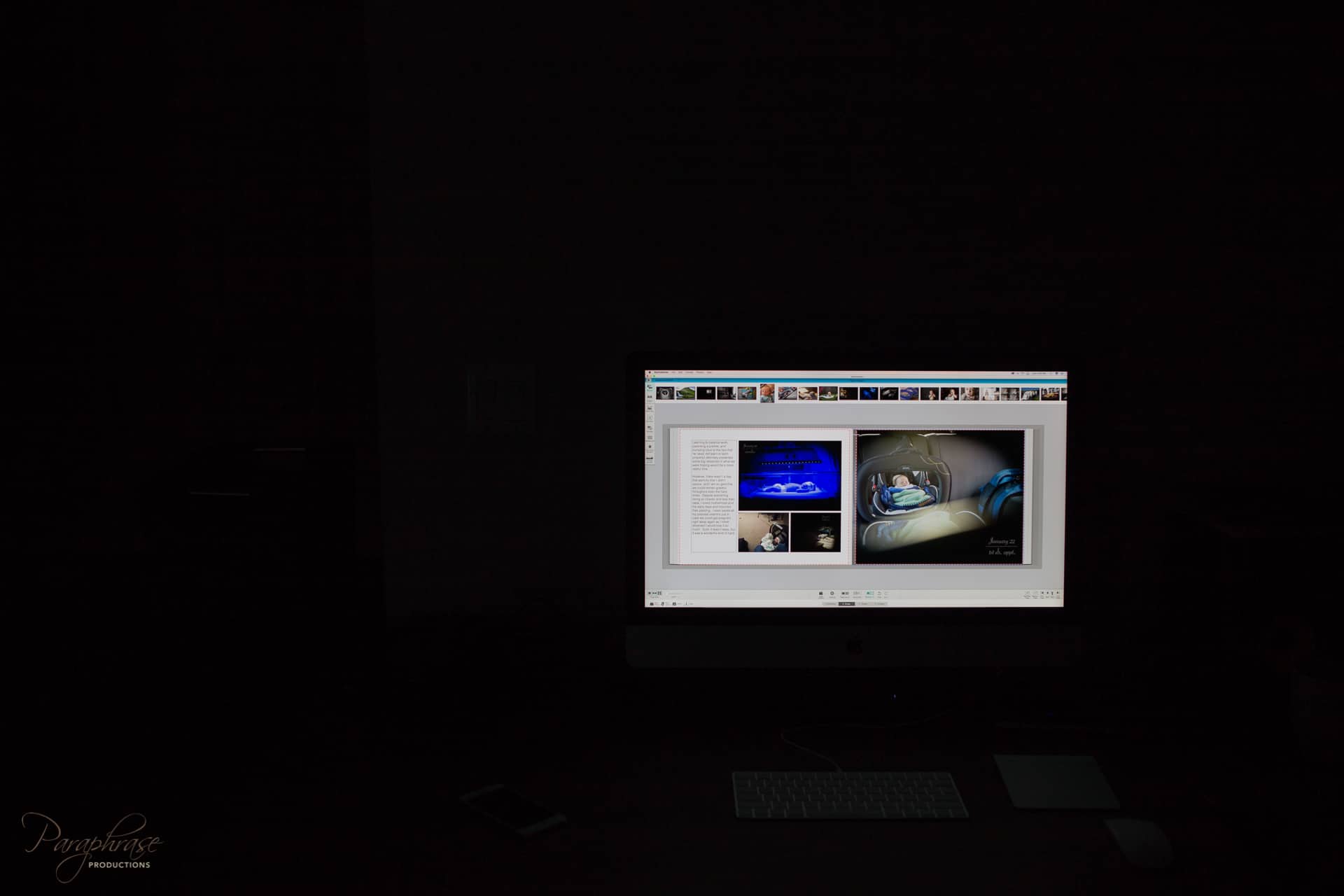 Daddy came home around 3:00pm, and we started to work on a few house projects.  On this list for today was to finish patching the walls from the renovations and to go shopping for some insulating window coverings to help regulate the temperature in here a little more. 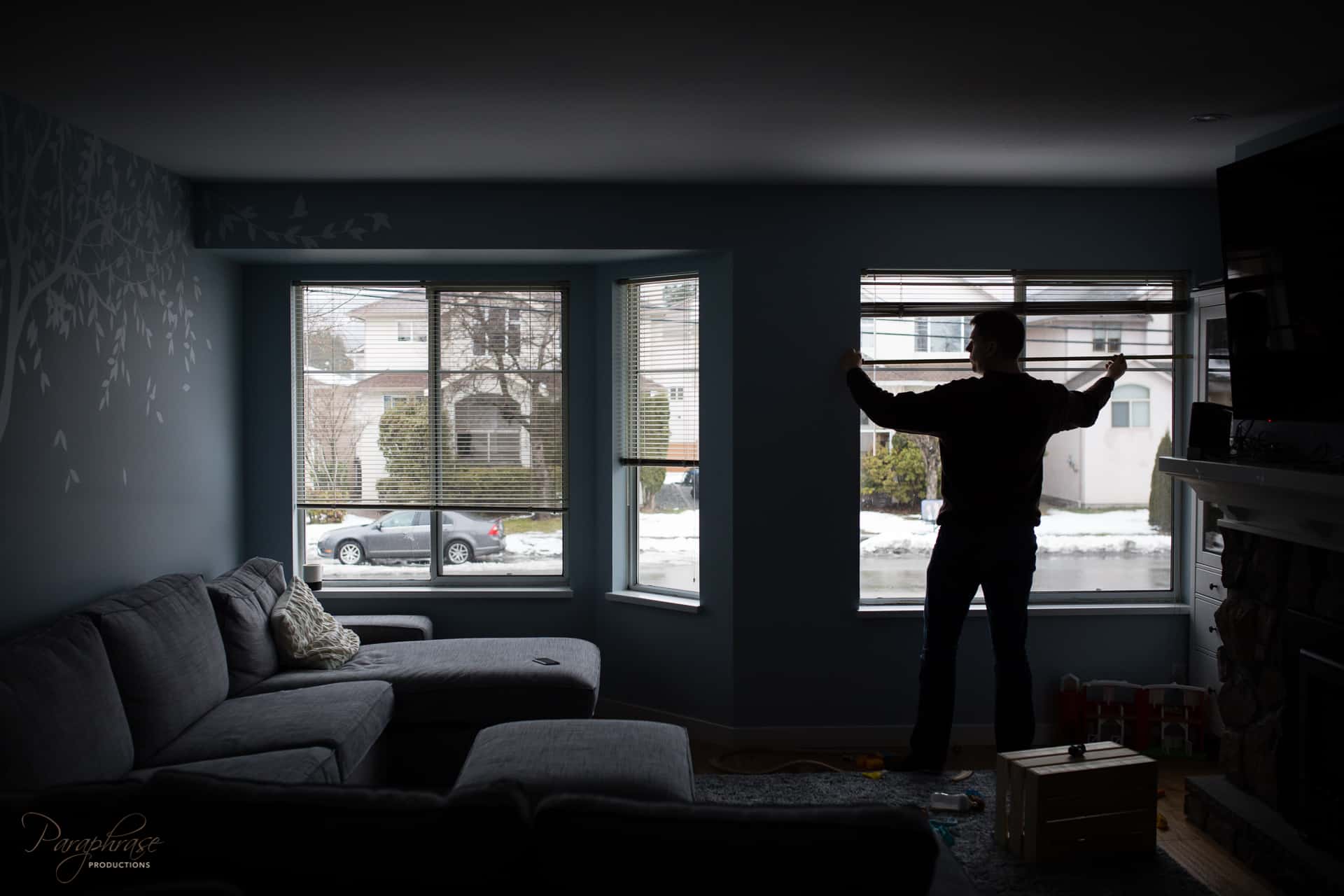 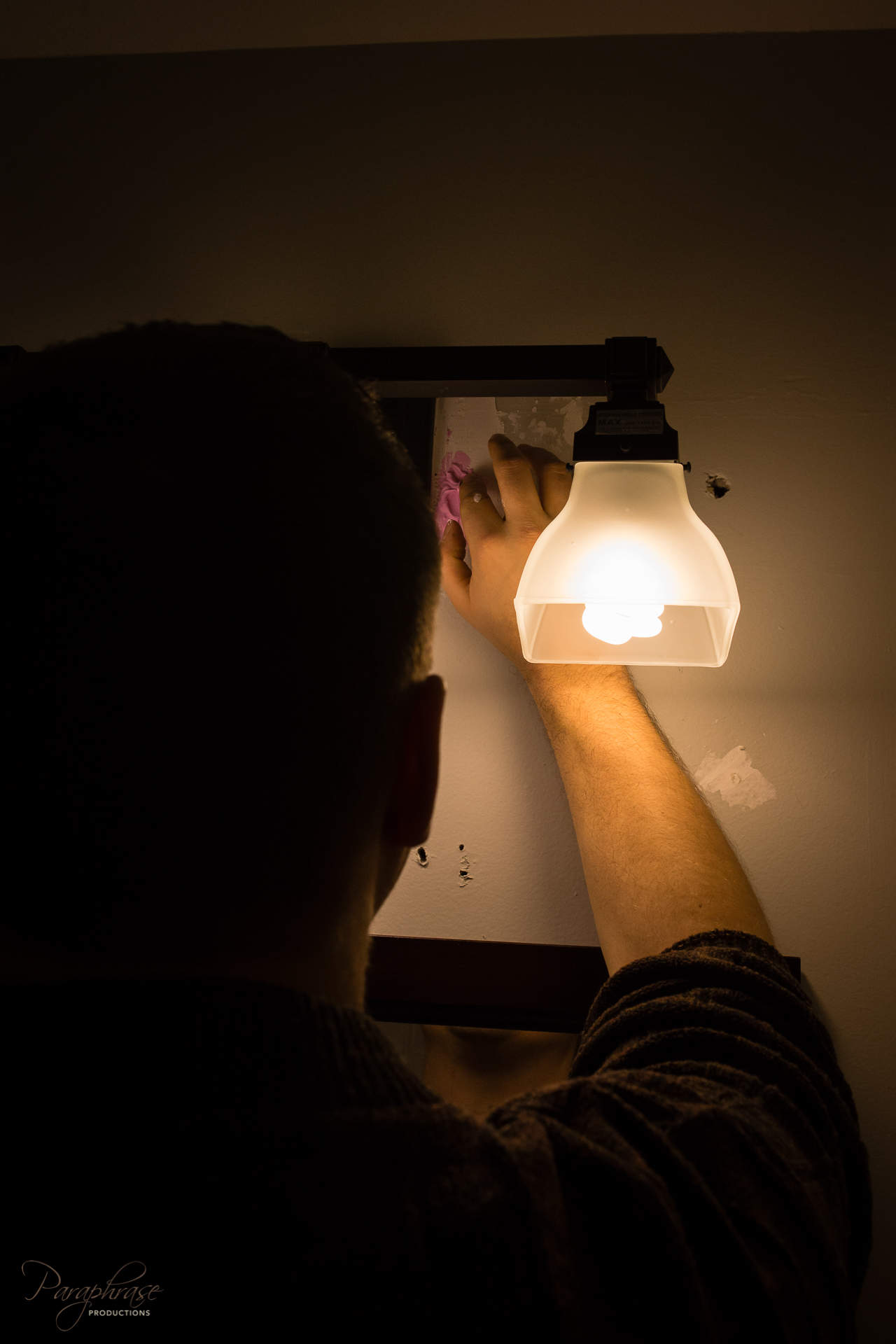 We woke you up with our sanding and patching, so we decided to go pick out our curtains before dinner.  We bundled your little snot-nosed face up in your pajamas and a blanket, and tucked you into the shopping cart at Home Depot.  We picked up window dressings for both upstairs and down, as well as a few other miscellaneous items we needed.  Yes, you’re still in your same pajamas from the morning.  Yes, you wore those pajamas all the next day as well until we deemed them dirty.  We’re not too fussy about that sort of thing around here. 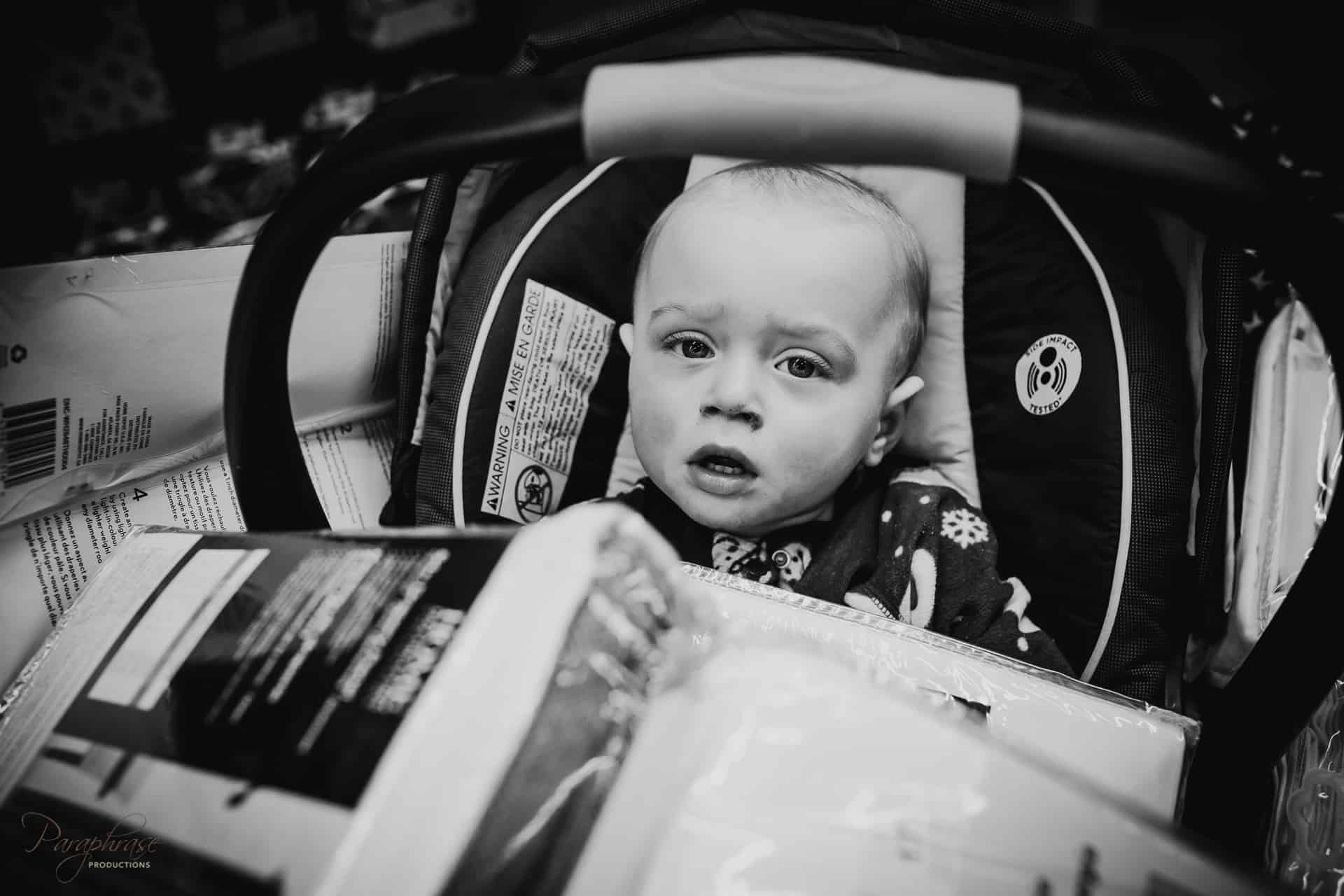 When we got home, daddy started to paint over our patch work from earlier while mom started on dinner.  We may or may not have given you another bottle while enjoying some McDonald’s on our errand trip, as opposed to healthy snacks for all, so by the time dinner rolled around it wasn’t anything fancy.  Just a couple ribs from out of the crockpot and some boxed stuffing.  You love stuffing and struggle to want to eat solids when you’re sick.  It worked and you even tried some of our ribs.  You were, however, quite out of sorts as we were focused on our tasks of painting and dinner prep and weren’t paying you as much attention as you would like, but after dinner, daddy let you help him do some sanding and you were more content. 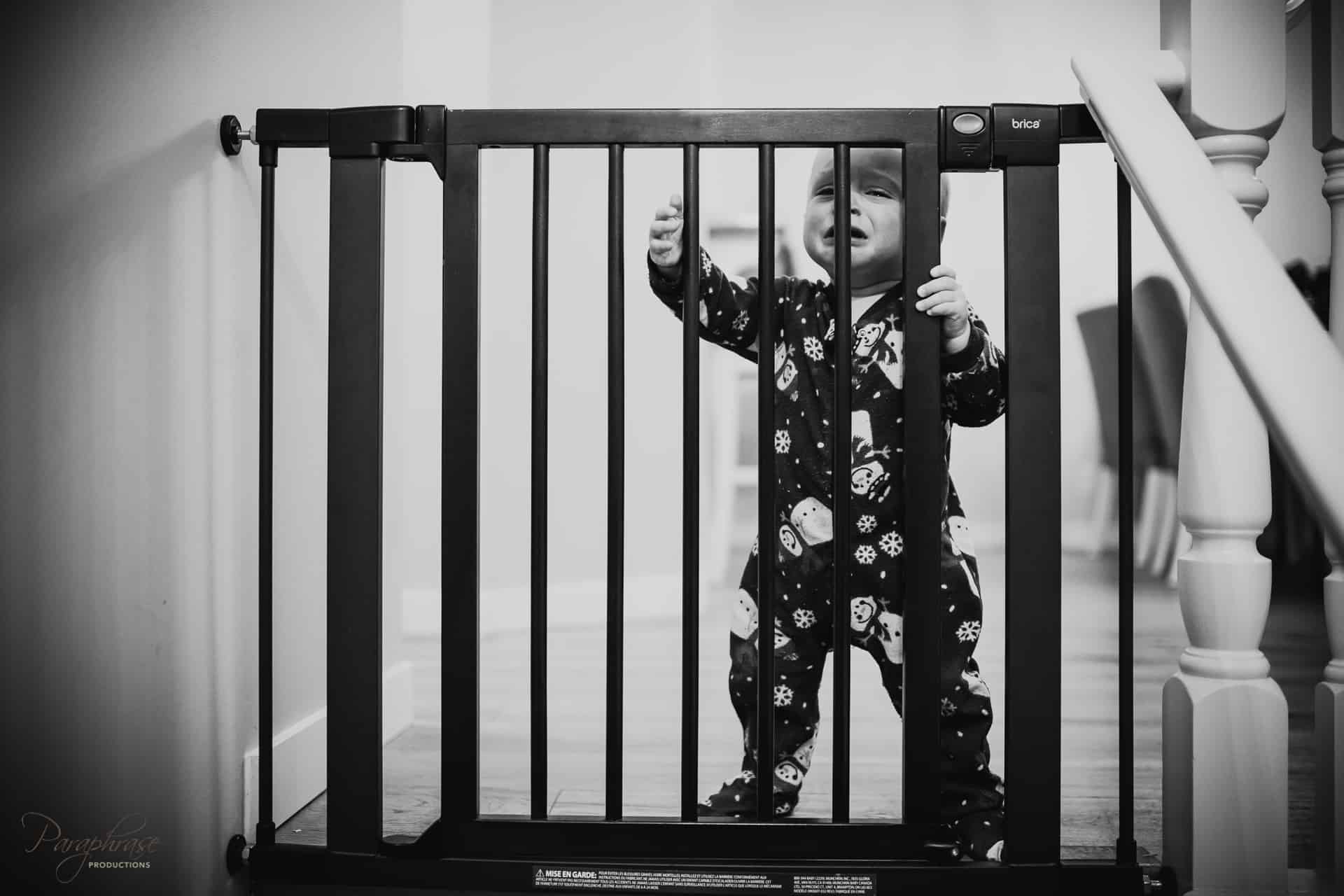 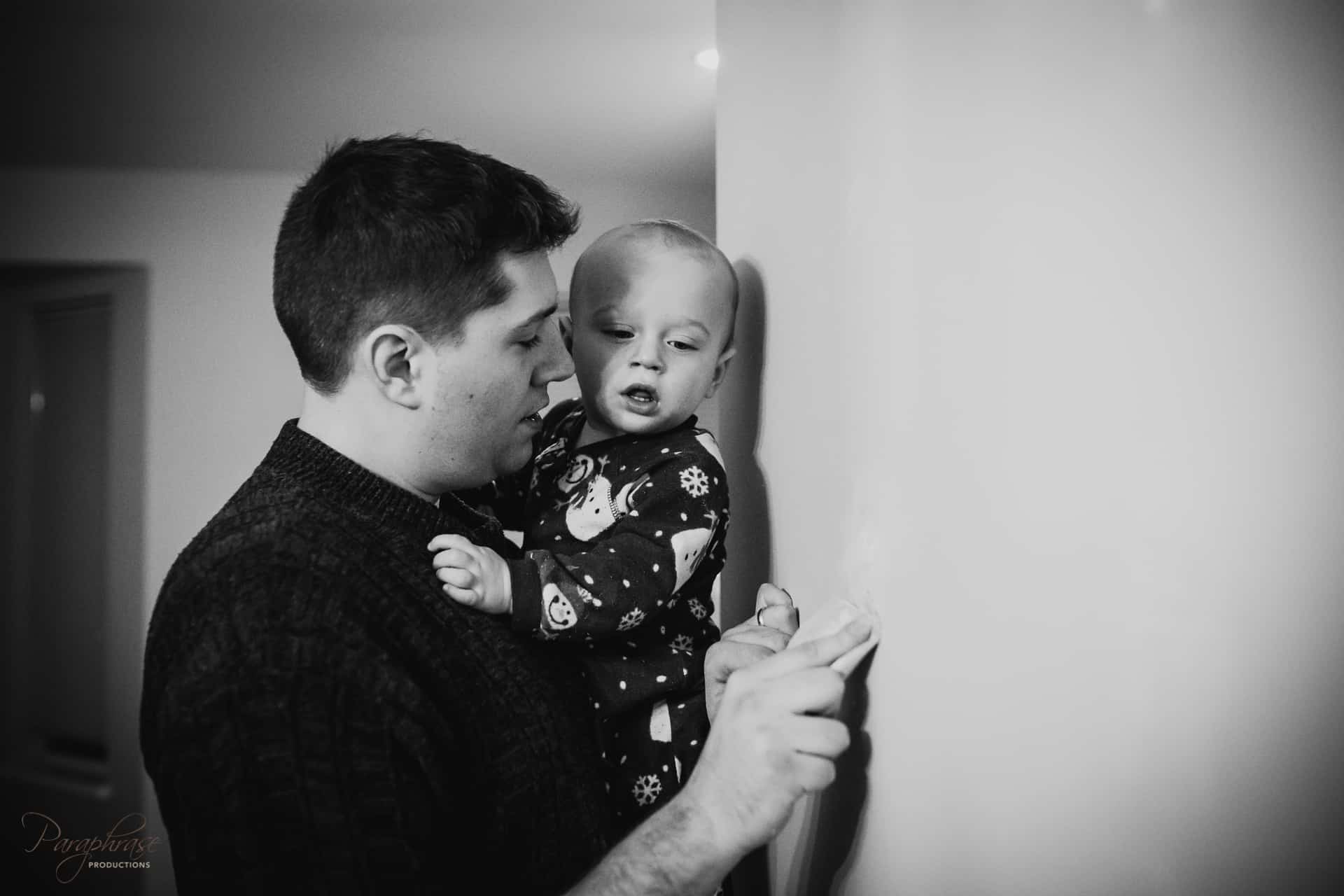 It was just after 6pm (your bedtime) by now so we tucked you into bed and crashed in front of our computers for the evening.  Around 7:30, mom and dad made a smoothie to help offset the McDonald’s and boxed stuffing and watched crazy cooking shows until way too late.  We said goodnight as dad went downstairs to finish up some work and mom went on her phone.  You whined a bit throughout the evening with your cough, but slept pretty soundly until 5am, but Monday was dad’s turn to get up with you ;). 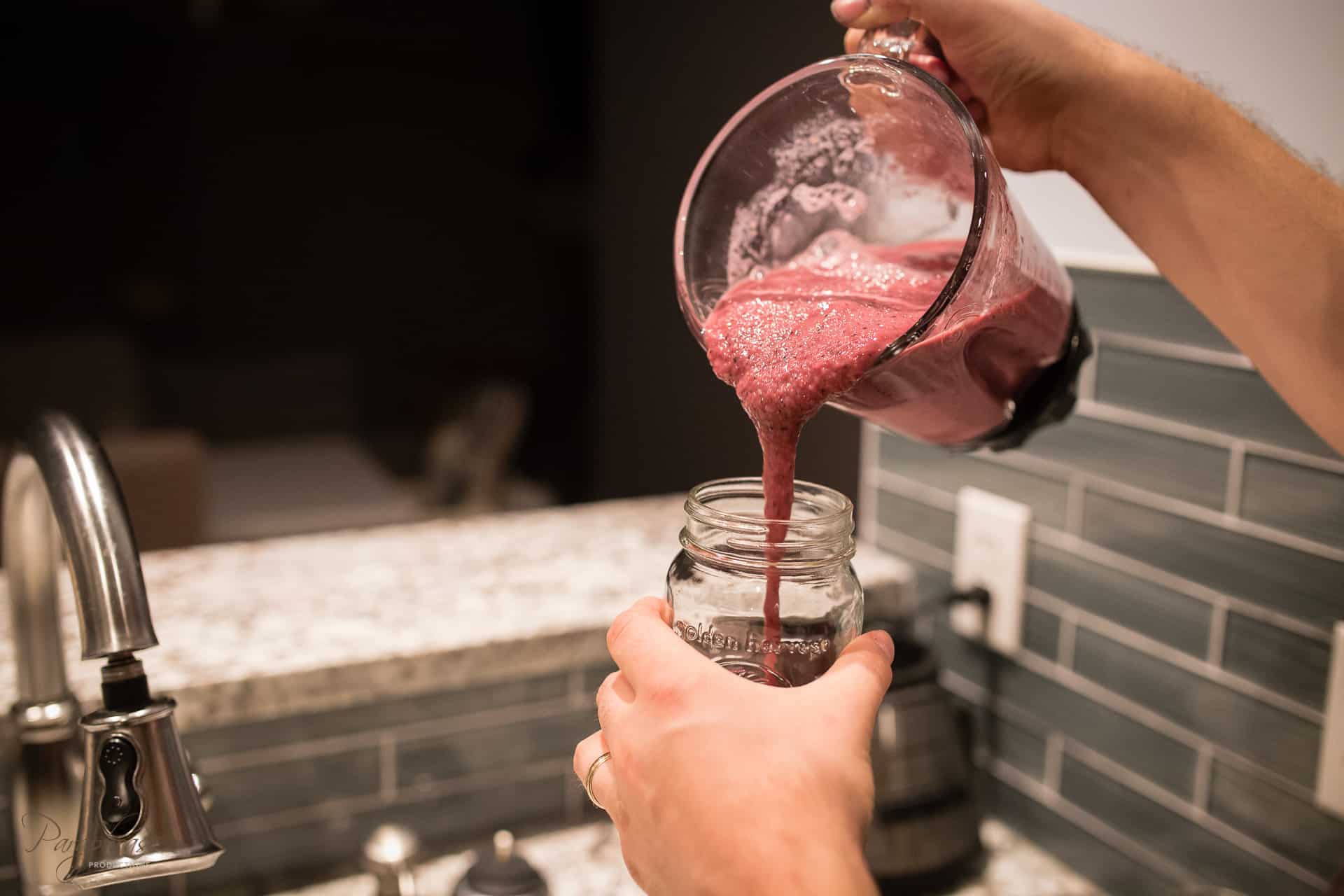 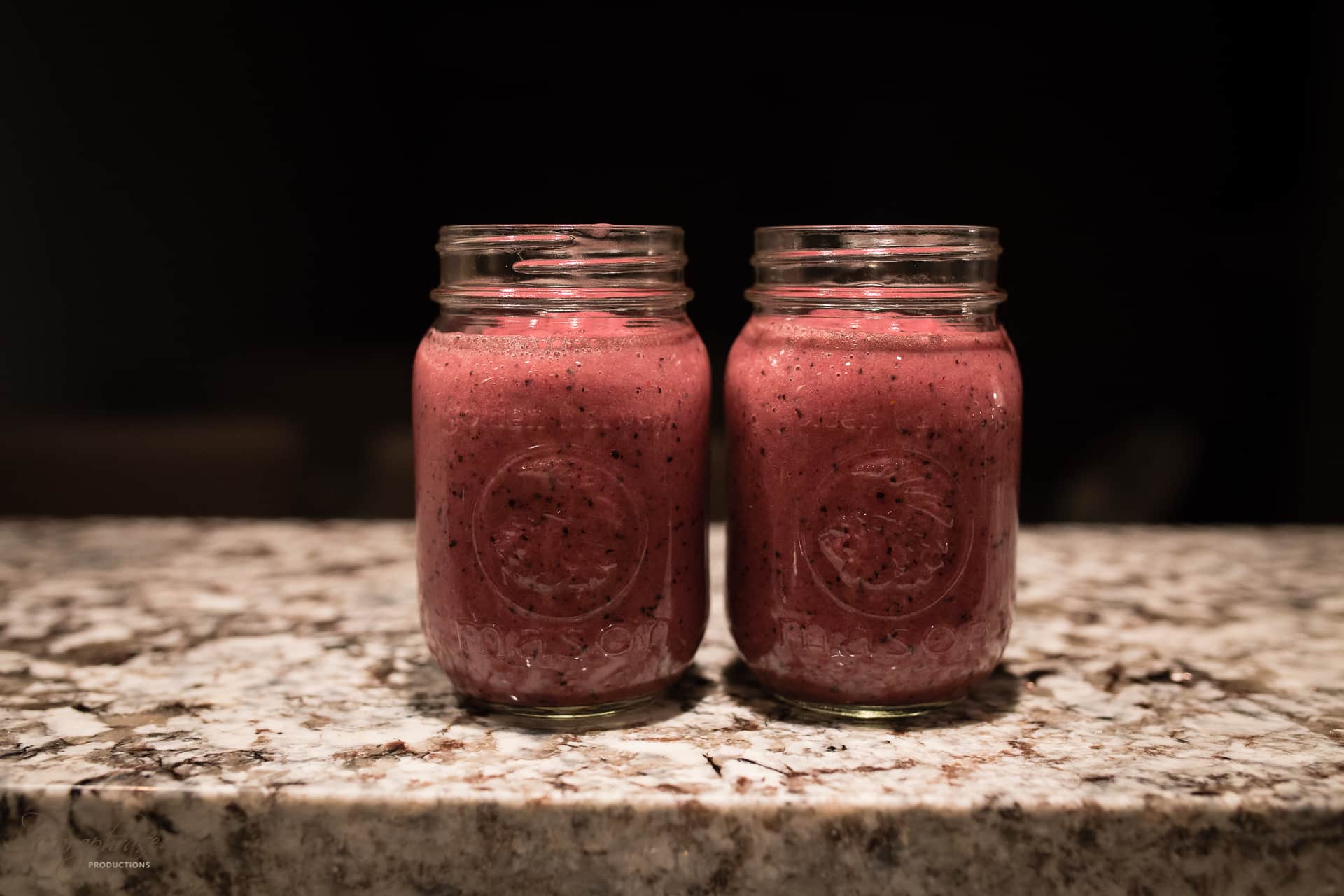 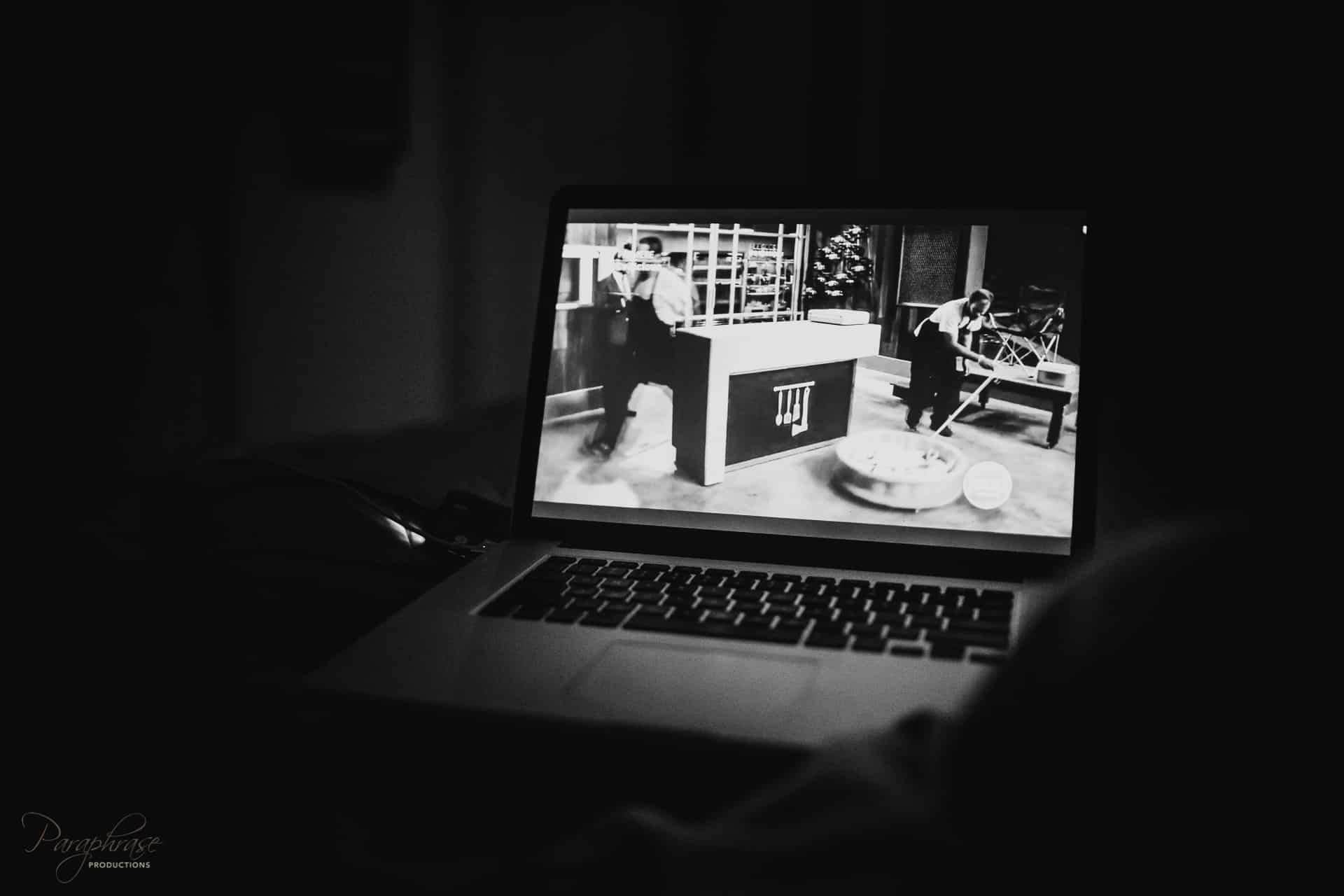