Somehow in my daily postings on this blog, I didn’t actually put up September 4th’s photo!  Well, here it is.  I had to dust off the old guitar to learn a duet part to play with a piano student.  🙂  Turns out it was in a pretty hard key, so I’m glad she just asked me to play with her on the piano instead, haha. 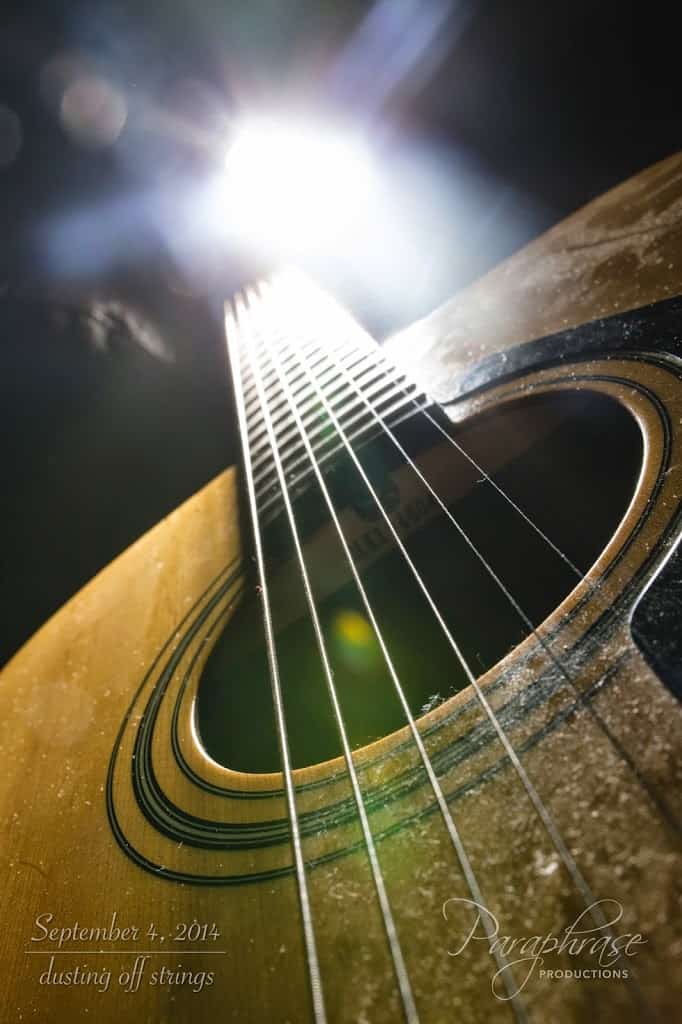 Okay, now back to Thursday, September 11th, where I was supposed to be!  I try to avoid the oh-so-common food shots, but this week I was swamped, so I’m pretty sure food was my daily photo subject at least three times.  The first time was when we ordered pizza (and non-dairy chicken wings for me) and ate in bed.  I want to remember these days because they are awesome, and I hope they never stop! 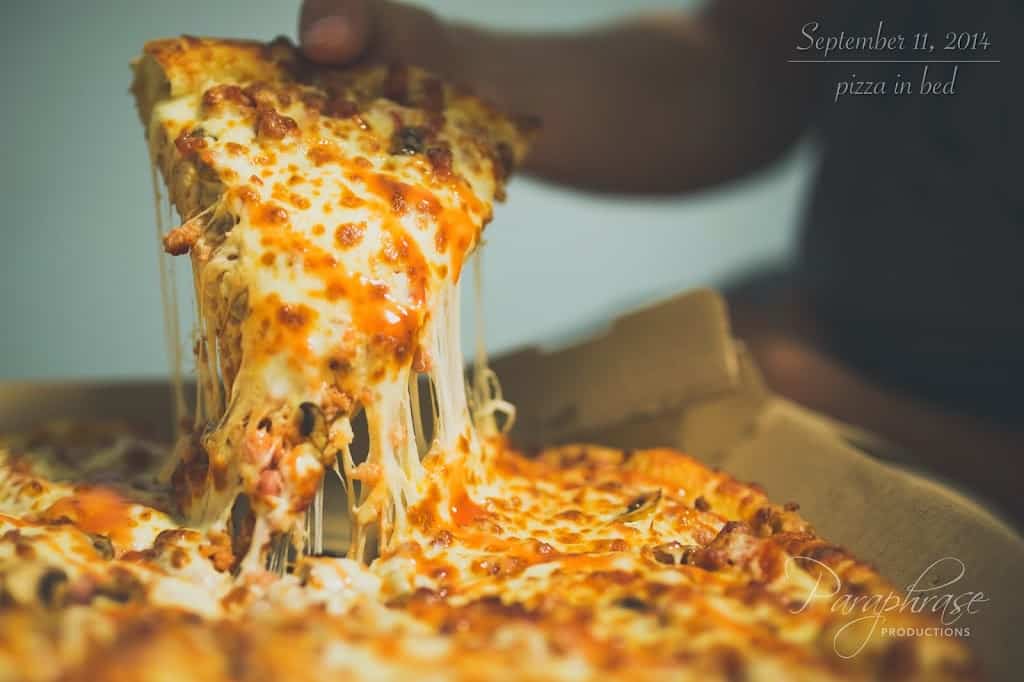 The next day I dropped Nick off at the airport after work on Friday for a Calgary wedding, and came home to an empty house.  I don’t get lonely very easily because I have my never-ending to-do list that keeps me company, but I don’t love it when he’s not around. 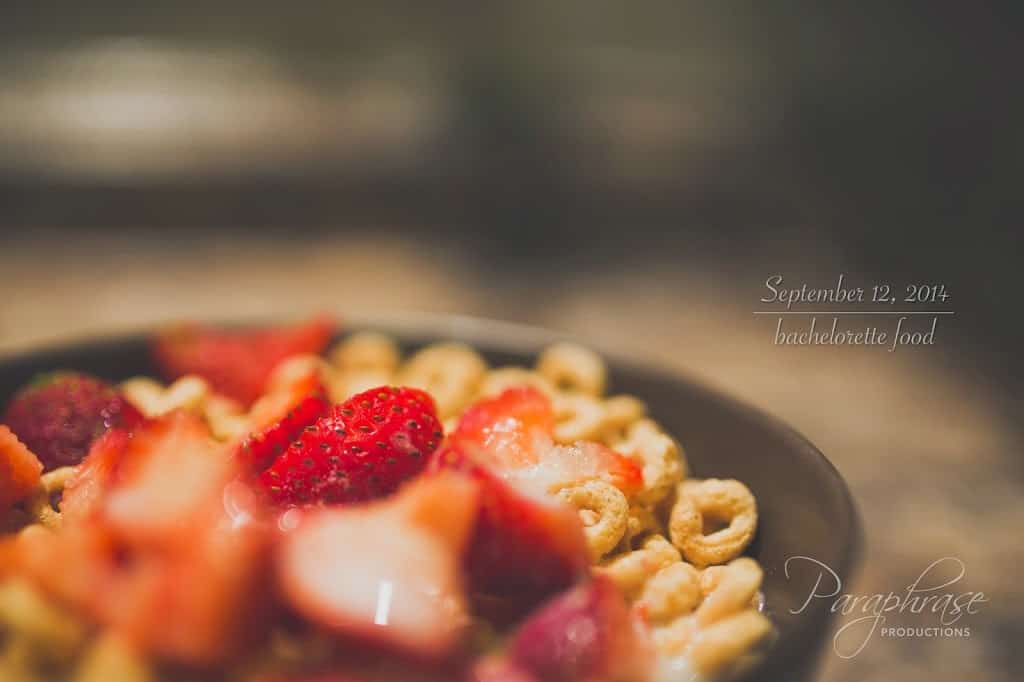 Saturday, September 13th, I was up at the crack of dawn to shoot my first wedding under our company’s name.  It was actually my 8th wedding of the Summer, but the first that was completely mine from start to finish.  The couple was a dream to shoot, and you can see more pics in this post HERE. 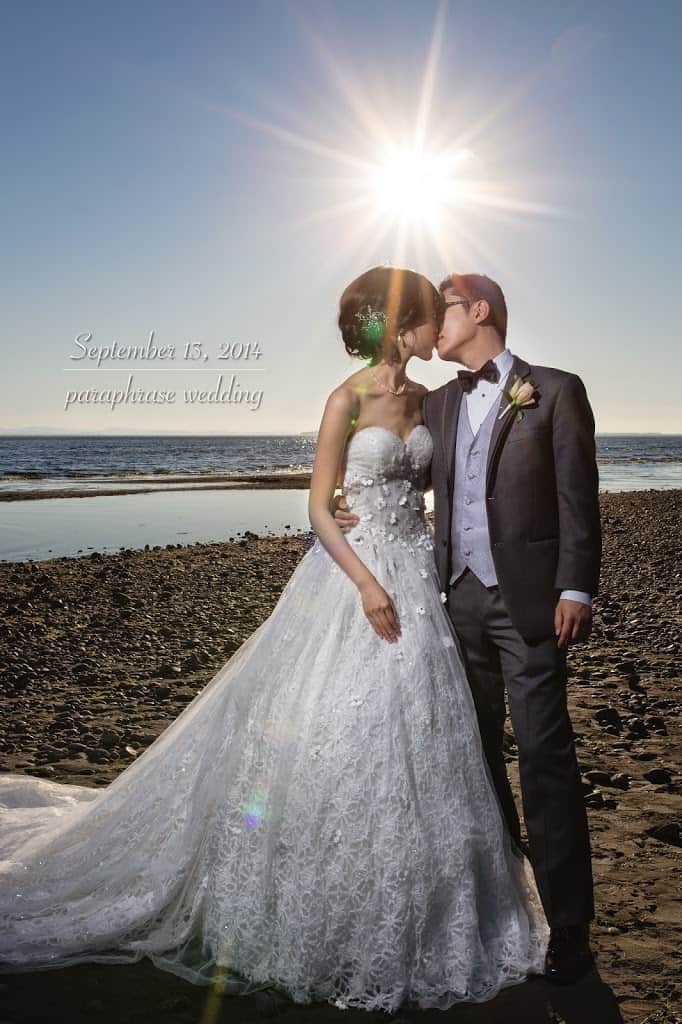 Sunday, was an editing day!  As was pretty much every single other day this week as I wanted to see if I could finish an entire wedding in less than a week with 500+ photos.  (I did!).  So here’s where my gear sat, and continues to sit a week later, still waiting for me to put it away! 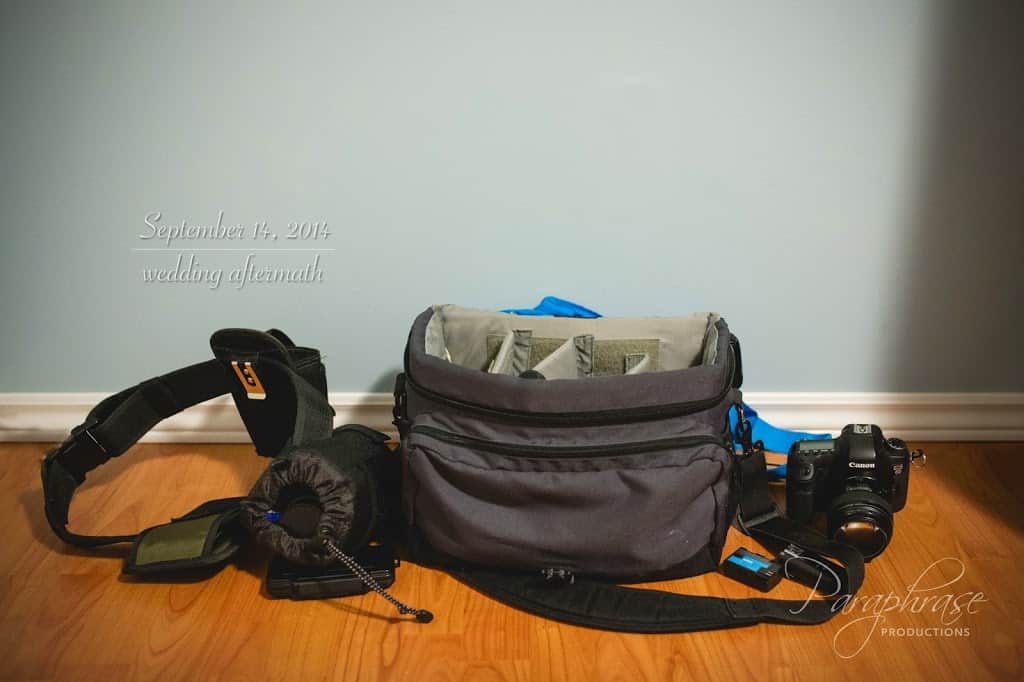 Monday, after work and teaching, we had a worship team event to go to for the evening at church.  I should mention that I pulled my first all-nighter on Sunday night if you don’t count the 45 minutes of sleep I got between 4:45 and 5:30am.  So I was pretty tired through that meeting.  We dropped another team member off at home on our way back and I grabbed this shot out the car window: 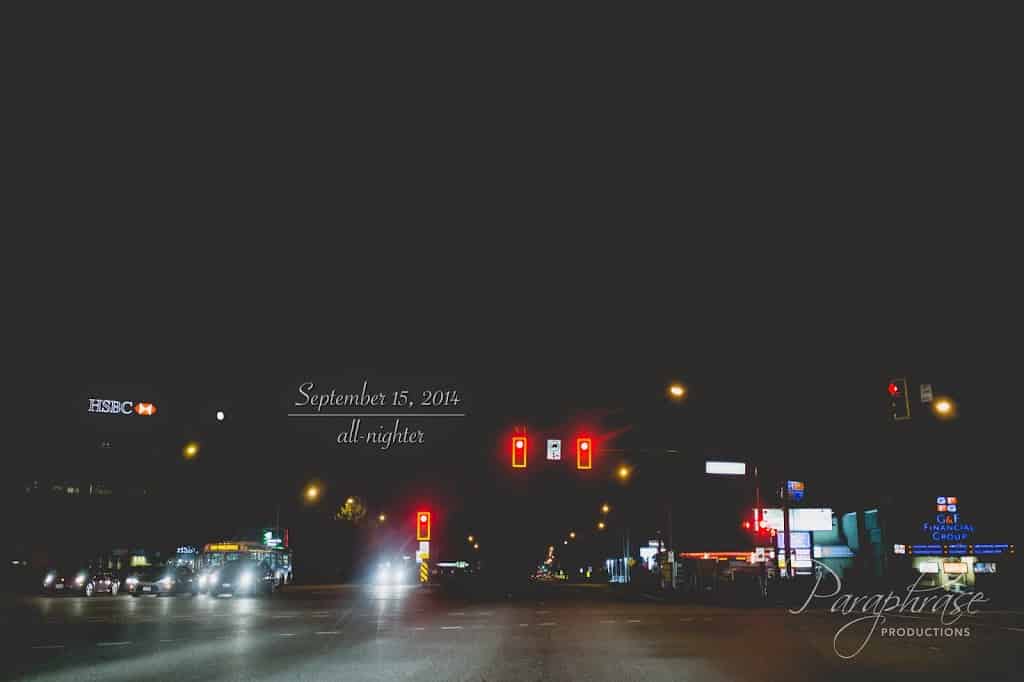 Tuesday, I taught until 8pm and then texted Nick asking him to bring dinner home.  We are probably the only family excited about all the fast food coupons in our mailbox!  We had some A&W while I continued to work on editing the wedding and then headed to bed. 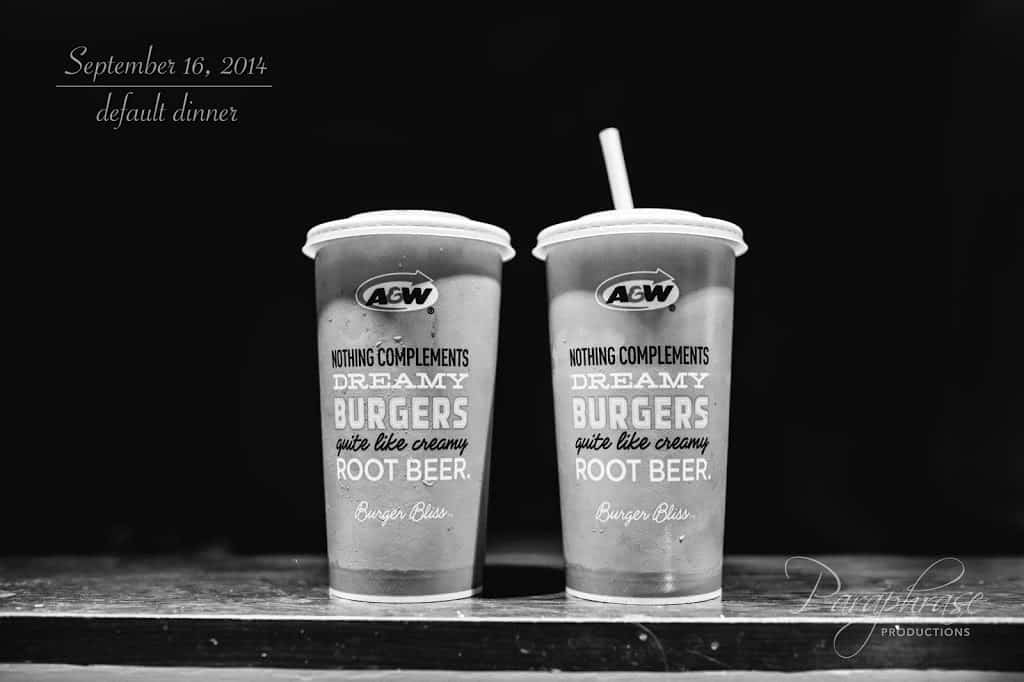 Wednesday night is Life Group (Bible study) night again now that it’s September.  I came home from work, taught two students, edited as many photos as I could before we had to leave, and then we headed out (grabbing Subway on our way because we need to give all the fast food places equal love or it wouldn’t be fair).  I’m actually a little appalled at how much take-out we have consumed in the last 7 days as I type this!  Haha.  Subs have vegetables.  Thus, they don’t count.  I grabbed this shot on my i-phone on our way home through the rainy window. 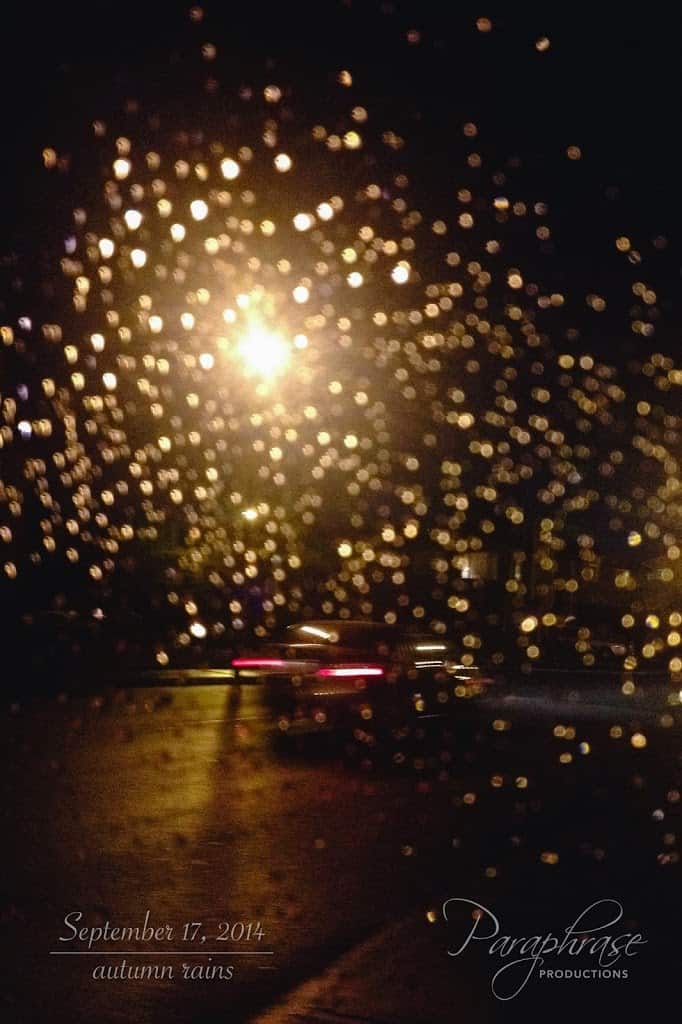 Thursday, we put a stop on the fast food.  Kind of.  Does picking up a pre-cooked chicken from the grocery store count as fast food?  Why do we also have bananas and potato chips on our plates?  I don’t know.  I was editing while Nick made this, so ask him, ha! 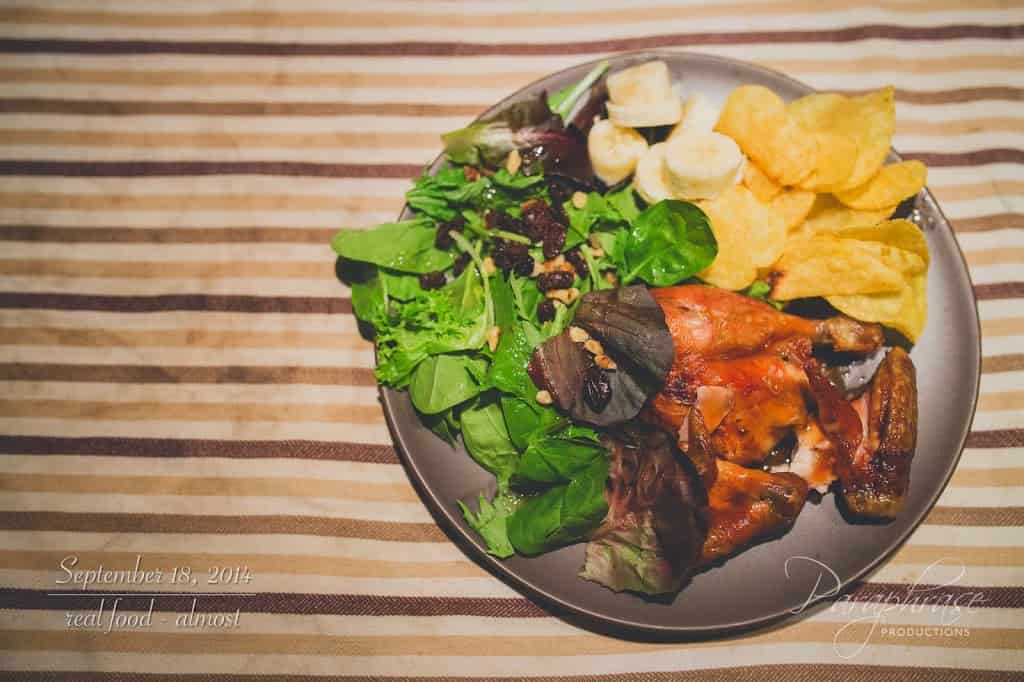 Friday, I FINISHED EDITING the wedding.  (I still spent Saturday) exporting and uploading, etc., but the majority of the work was done by late Friday night.  We actually had time to grab a quick movie with friends as an editing break, and I grabbed this shot in the fog on the way home.  Nick indulged my “go around the block again!” for it.  He also indulged a quick stop at home because while I had my camera and light stand in the car, I didn’t have a tripod or flash on me as I thought we were just going out for a quick movie.  If you’re wondering how long ten seconds is in feet (because that’s how long the self timer on my camera is), it’s the distance from the hood of the car that the camera is sitting on to where we’re standing in this shot!  I could JUST make it, but Nick can run faster and doesn’t have a gimpy foot, so he actually was the one to press the shutter button and then make the mad dash down to me for this shot! 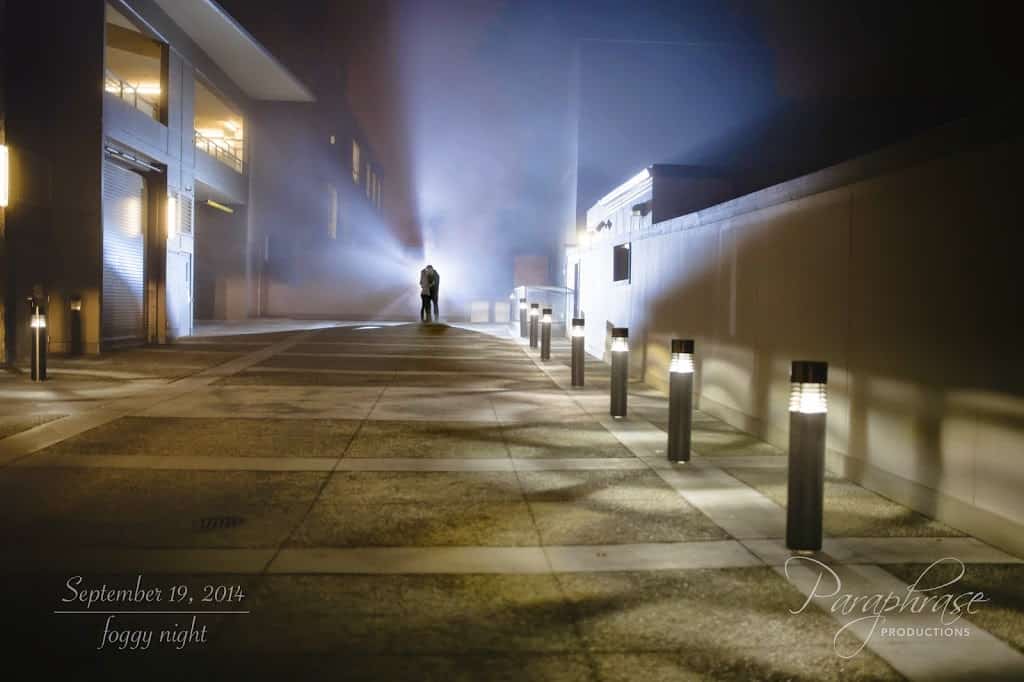