Sunday, September 28th, I enjoyed a nice sleep in after getting up so early the previous day to accompany my dad to the shooting range.  Nick was an absolute sweet heart and let me rest while he prepared scrambled eggs with avocado, bacon, sliced salami, fruit, and toast for us with jam he brought home as a wedding favour from one of this season’s many gigs: 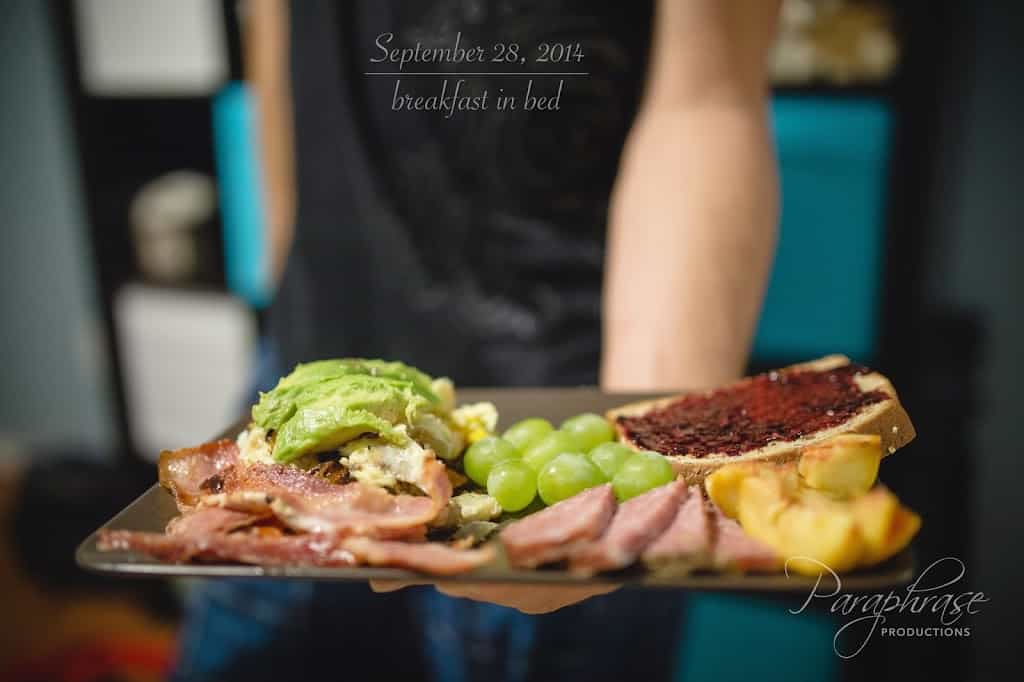 Monday is currently my lightest teaching day as I have a gap before my students and am finished by 7:15.  So I sorted all the laundry and stripped the linens for Nick to throw in before I taught, and then we picked it up afterwards.  There are benefits to shared laundry – one being you can do an entire month’s worth in one go! 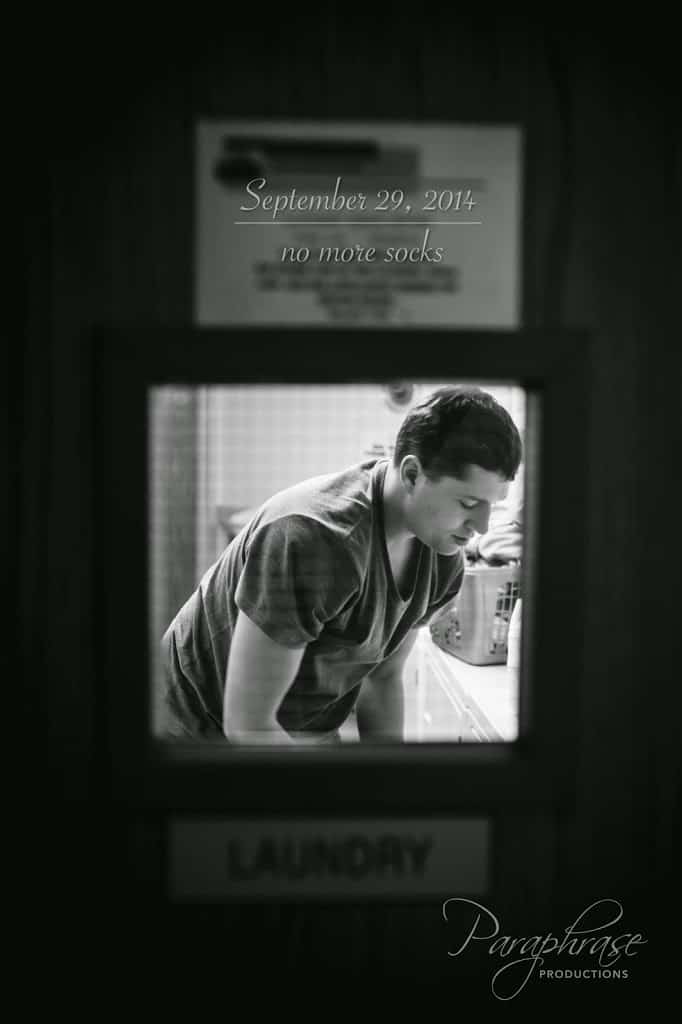 Tuesday, Nick had to pick up some footage from downtown so I got a rare ride to work in the car with him (as he usually works locally and I transit to the office).  Being in the car means I get to sleep in 20 minutes later, spend time with Nick, AND don’t have to shuffle from bus to bus in the morning rains.  It was a win all around for me!  Plus, I was really happy to have the extra time with Nick as it was a crazy editing week for him and we were like ships passing each other in the night for the majority of this week. 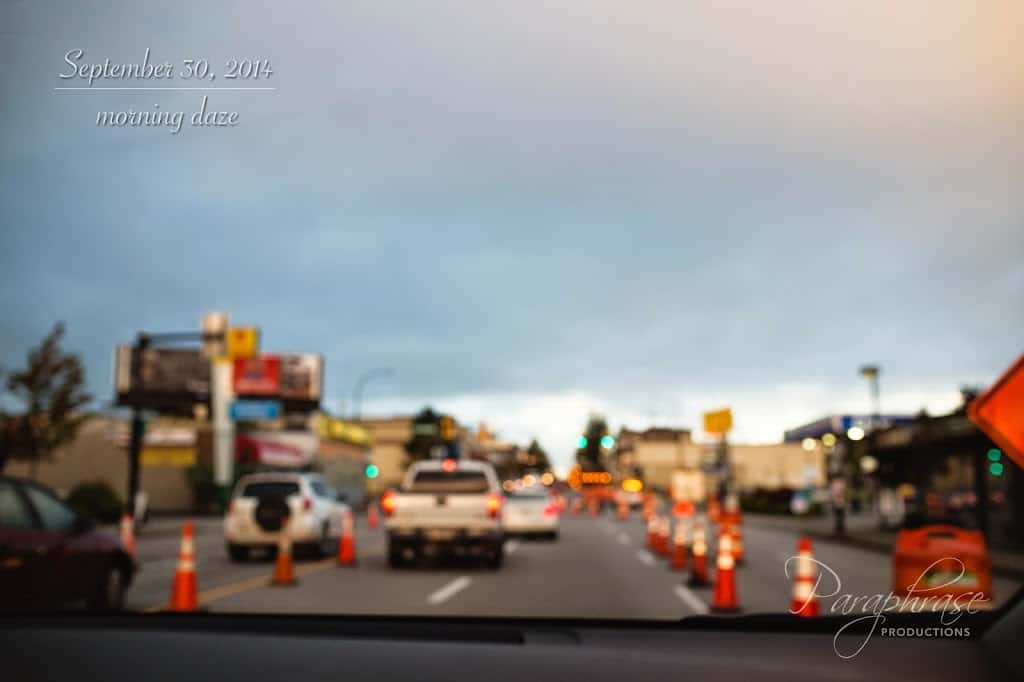 Wednesday night is Life Group night, and once a month it’s guys’ night.  However, Nick was absolutely slammed with work so we had a quick “chicken wings out of a box” dinner and he settled in to edit all evening.  It’s a good thing chicken wings are pretty much my favourite food in the entire world because we eat them a lot! 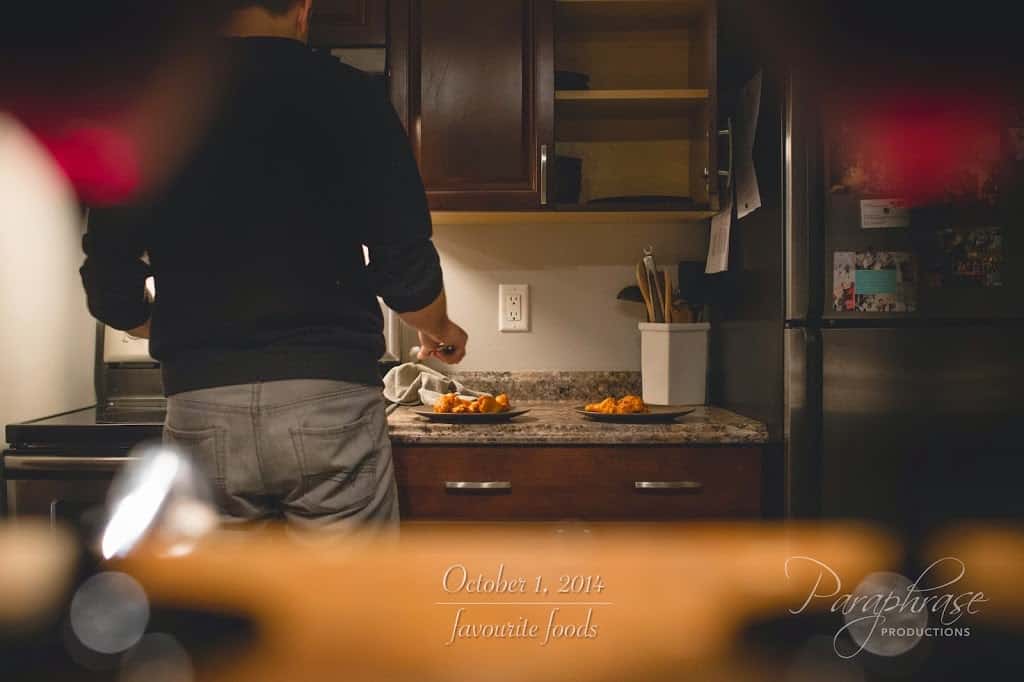 Thursday my package arrived!  I sold my first canvas to a client (the small one on the left), and I also ordered one for the big empty space in our hallway as I had a Groupon and the price was amazing.  Nick picked our Grand Canyon photo, which will forever remind me of our Great Adventure from sea to sea! 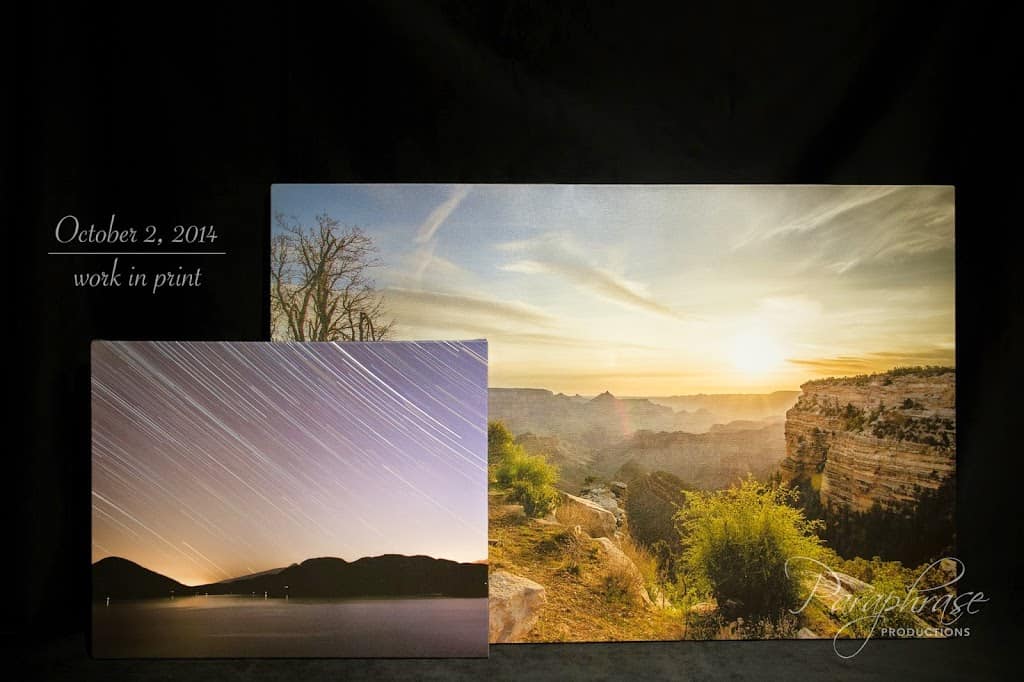 Friday I came home from work, quickly taught one piano student, and then jumped in the car with Nick to head back downtown to enjoy dinner and board games with some friends of ours.  We’ve been trying to set up a time to get together with them for months and finally pulled it off! 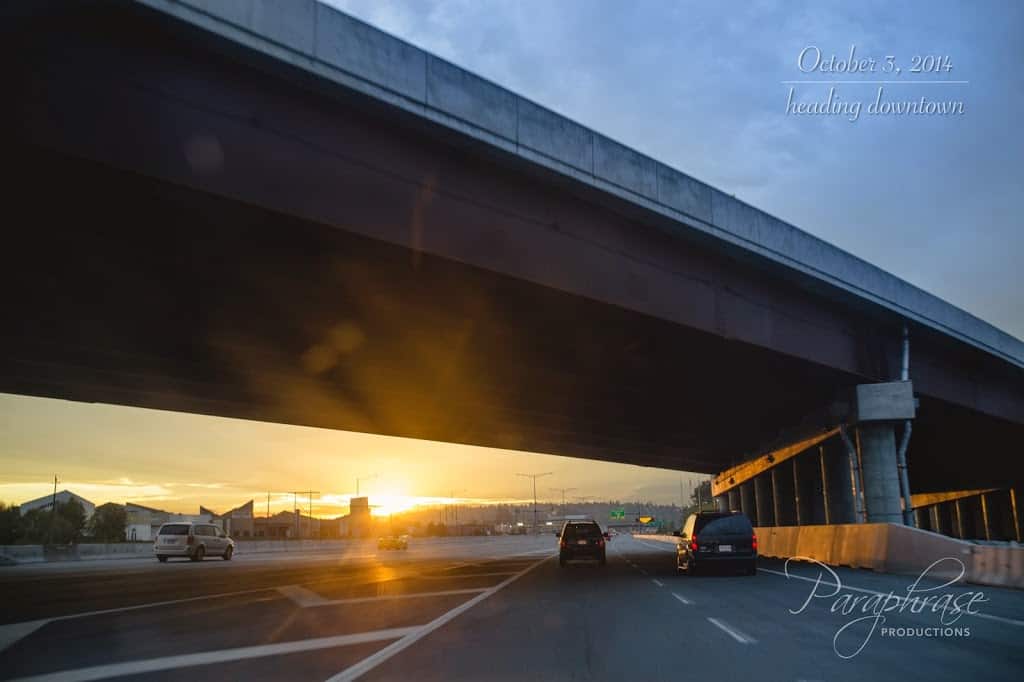 Saturday, I shot a wedding for a local company and finished around 6pm.  Nick’s wedding was scheduled to go until almost midnight and with his many all-night edits this week, I really hadn’t seen him much besides at our friends’ the night before.  Thus, I decided to head over and work on my laptop beside him while he edited.  I also scored a sweet meal out of the deal :).  During a lull, I pulled him outside to help me take this shot for my daily as I didn’t have any tripod or remote gear with me. 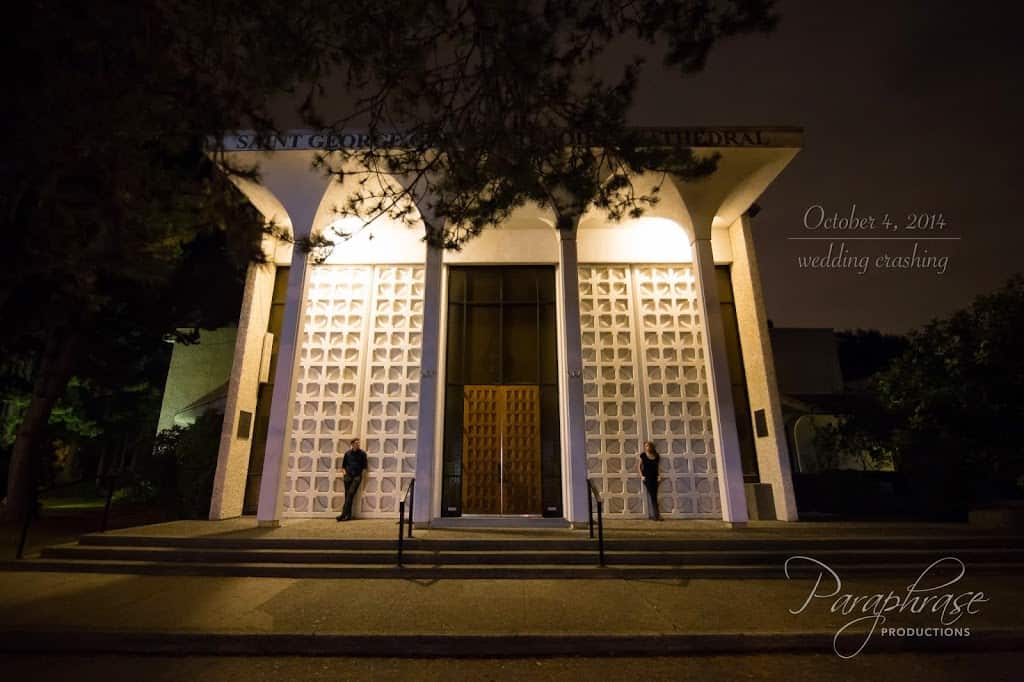 If you’re wondering how we did it with no tripod or remote, we just took turns taking a photo of the other person, and then I cut Nick out and pasted him into my photo afterwards:

Sunday, I had an engagement shoot to do with a friend of mine who asked me to second shoot with him.  I really wasn’t in the mood to do two shoots back-to-back, but it ended up being a ton of fun!  I also got WAY more comfortable with off-camera lighting and used it for a number of the shots, which has been a goal of mine recently.  You can see more from this shoot here if you like :).  Afterwards, I met up with Nick downtown as we both had some file transferring to do, and then we headed off to a friend’s 30th surprise birthday party. 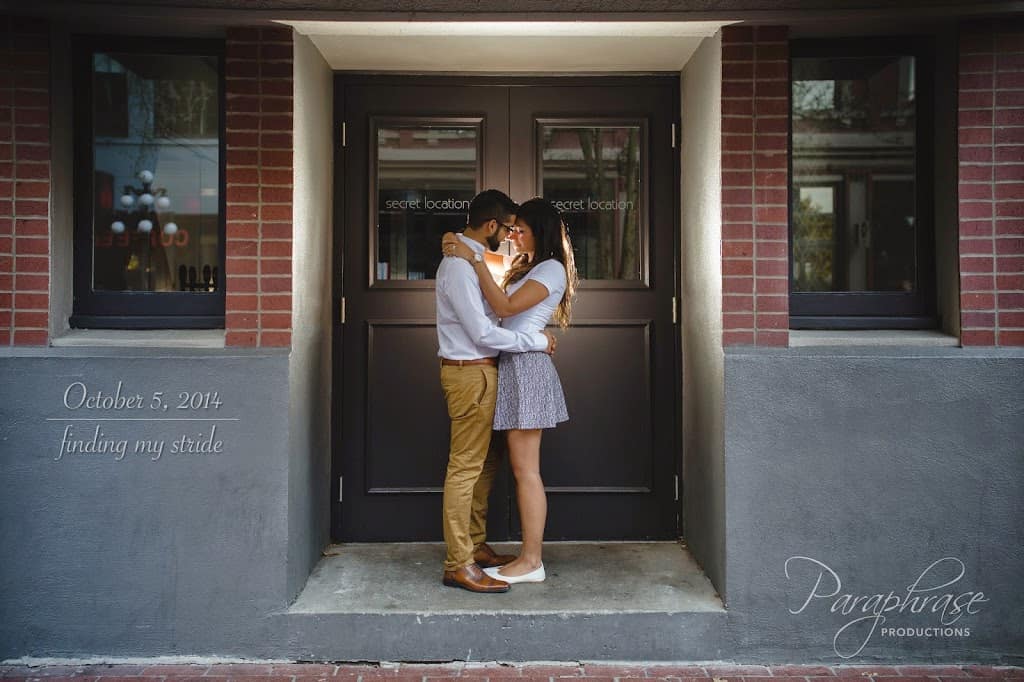 Monday came a bit too early after such a late night at the birthday party, but thankfully it was a peaceful day at the office.  I met Nick at the train station on the way home where I handed him my bus pass so he could head back downtown for the evening, and I took the car from him to do my teaching.  The rest of the night I’ve just been catching up on editing, blogging, and emailing, and am about to pack it in and finally relax here as it’s after 10:00pm already.  Netflix is calling me, so I’ll leave you with my last daily, which brings me completely up to date again: 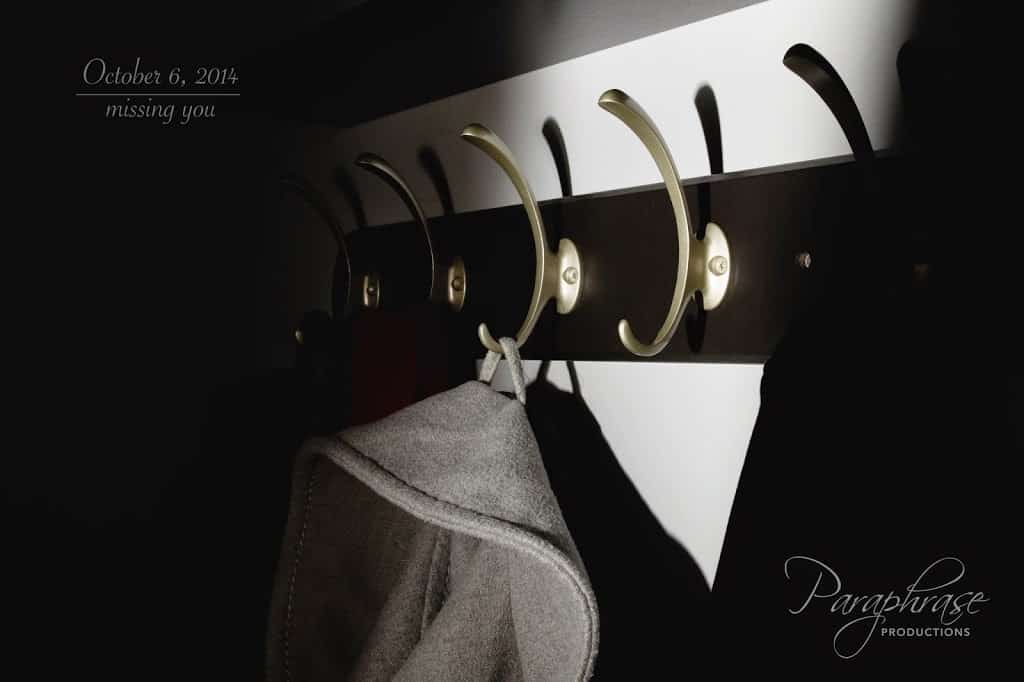 And because I have a bunch of photog friends that read this blog, I’ve been trying to include a bit more background behind some of my photos.  This one started out pretty lame.  I wanted to take a picture of Nick’s missing jacket because it sucks that he’s not home tonight or tomorrow night, and I’m gone the following night, too.  But when I went to take the shot initially, it seemed flat and boring.  I tried to hold open the hall door with my foot to let some directional light in, but even then it wasn’t isolating the single hook the way I wanted.  My solution?  A cereal box with my flash inside it to fire out some directional light, which I just held in my left hand while taking the shot with my right hand: