This post is going to break my weekly tradition a little bit because it’s my blog so I can do whatever I like ;).  I want to share with you a bit of my love of editing.  As much as I enjoy shooting, what I really love is settling down at the end of a long day and doing some “adult colouring”.  This is where I feel like I have the most expression as an artist.  Some might call me a heavy editor, and that’s okay.  Maybe I won’t always be this way, but for now, it’s where photography comes alive to me.
Some of the photos below were “fine” SOOC (straight-out-of-camera), and that’s what the aim should be.  But I like adding my own touch when all is said and done.  However, at least one of these was completely bad SOOC and was a definite “rescue”!
Wednesday I was feeling uninspired and didn’t end up finding something I actually liked until pretty late that evening.  I’m still trying to have each photo represent my day in some way, shape, or form.  Pretty much anything to do with music or piano is a pretty safe representation most days!
SOOC: 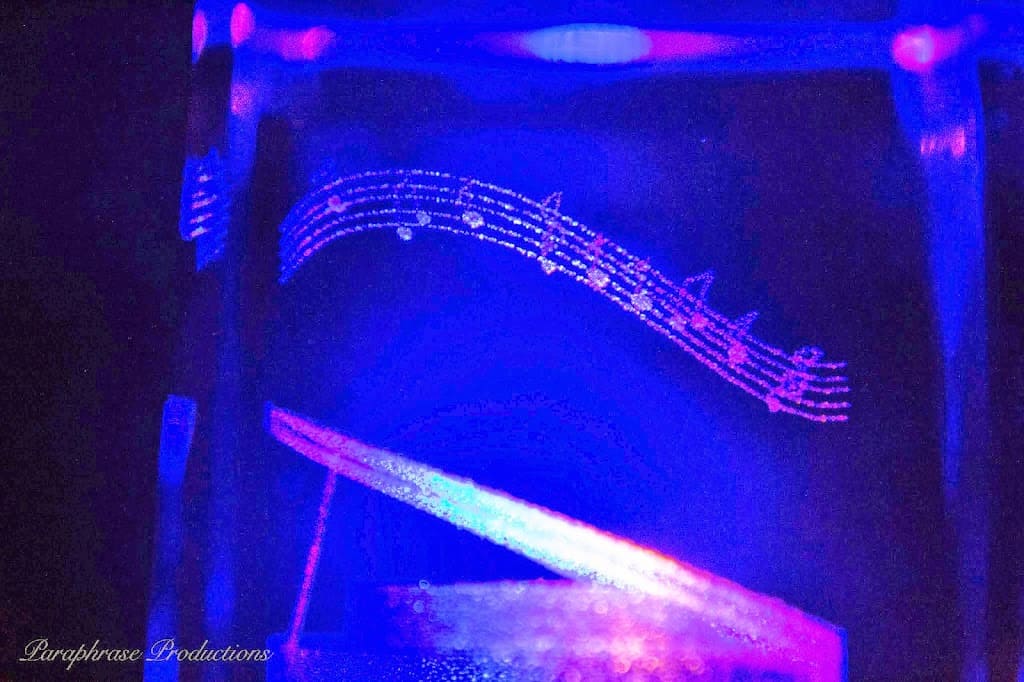 EDIT:  Trying to bring out the detail and control the blown highlights. 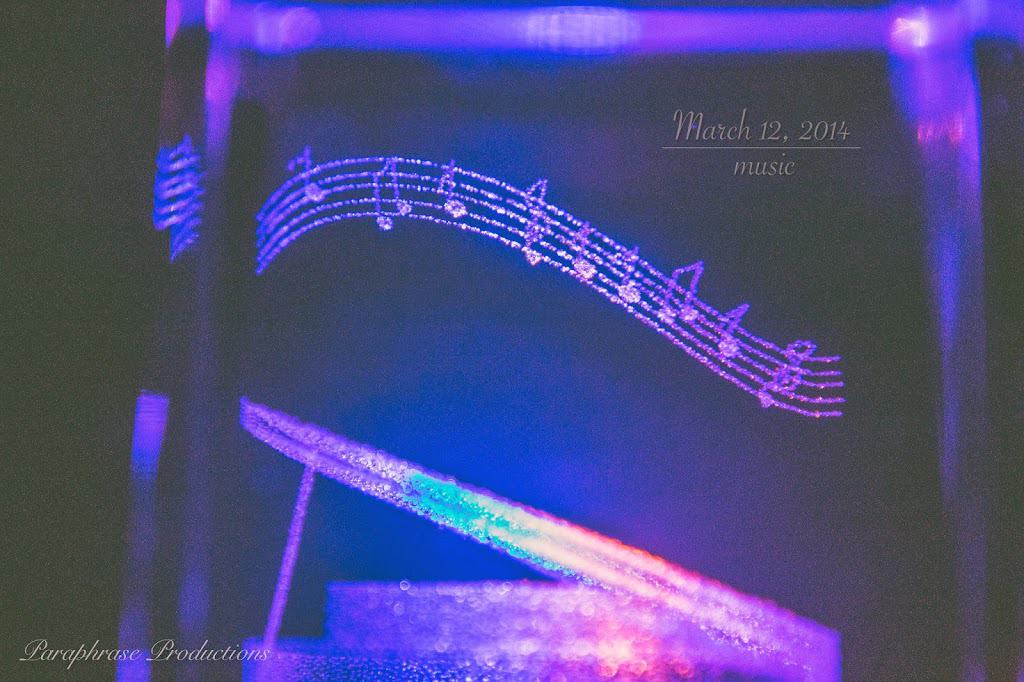 Thursday I grabbed my photo before I even got to work.  The bus drops me off in front of this little pub and I walk around the corner to the office each day.  I have had my eye on the red door thinking it might make a good daily, but I found out that if I don’t get it first thing, they have a large sign put out in front during business hours. 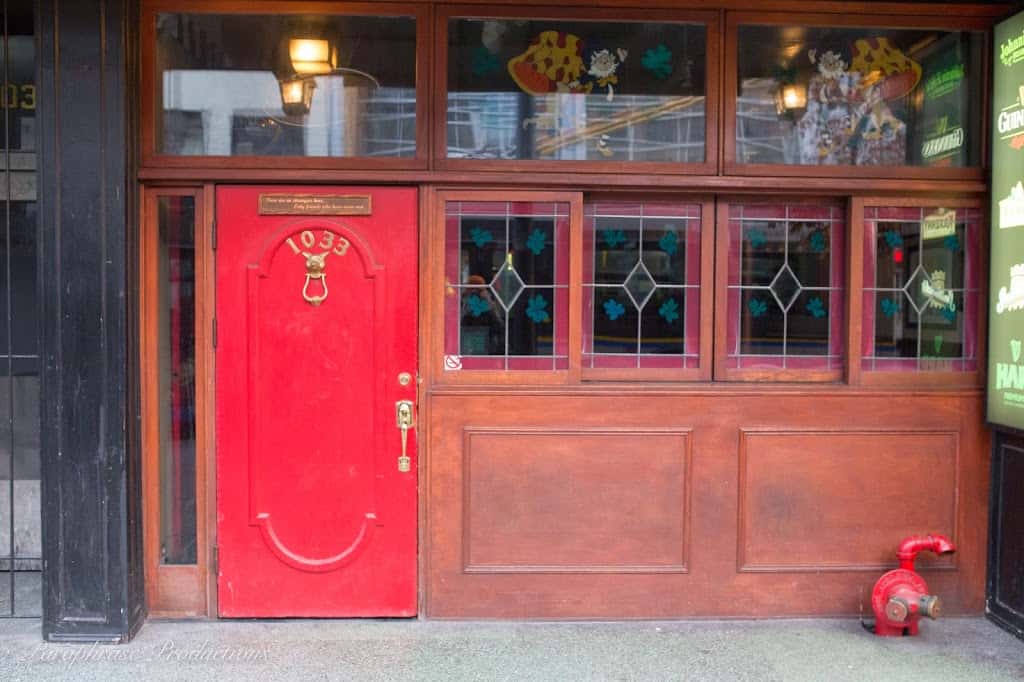 EDIT:  Playing with the crop and adding a soft grunge feel. 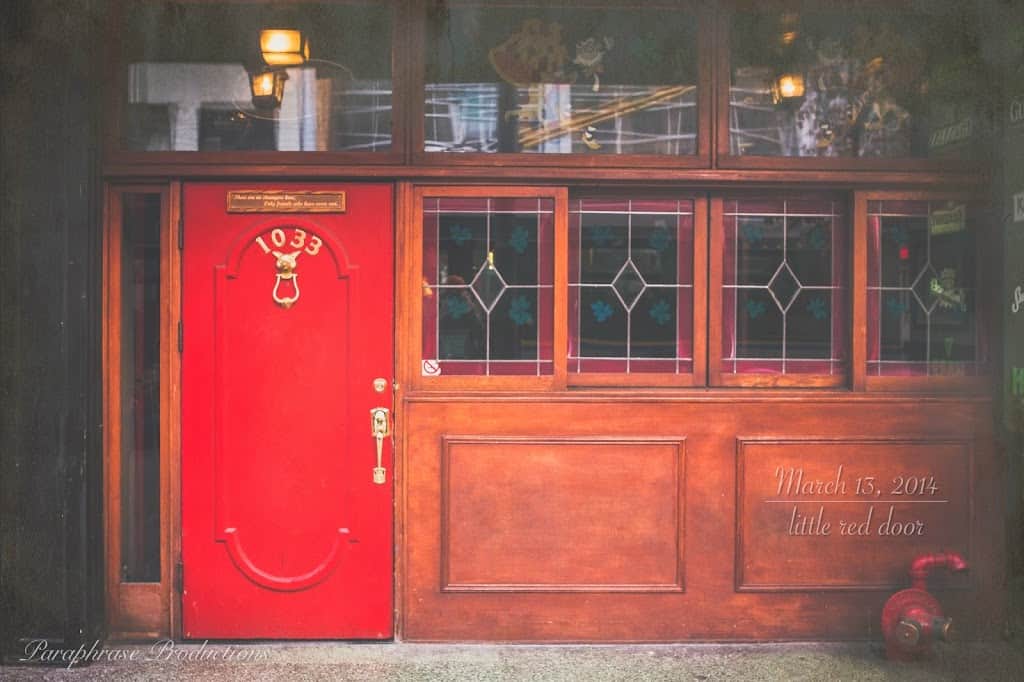 Friday I had a long walk to visit someone after work and took a bunch of shots on my way back (as I didn’t want to be late on the way there).  I was too embarrassed to ask the person walking their dog if I could take a shot of their gorgeous husky, but I was apparently not too embarrassed to lie down on the sidewalk to get at dirt level for this.  I called it new beginnings because it feels like Spring is finally coming, but also because it feels like this day marked a lot of personal new beginnings in my own life: 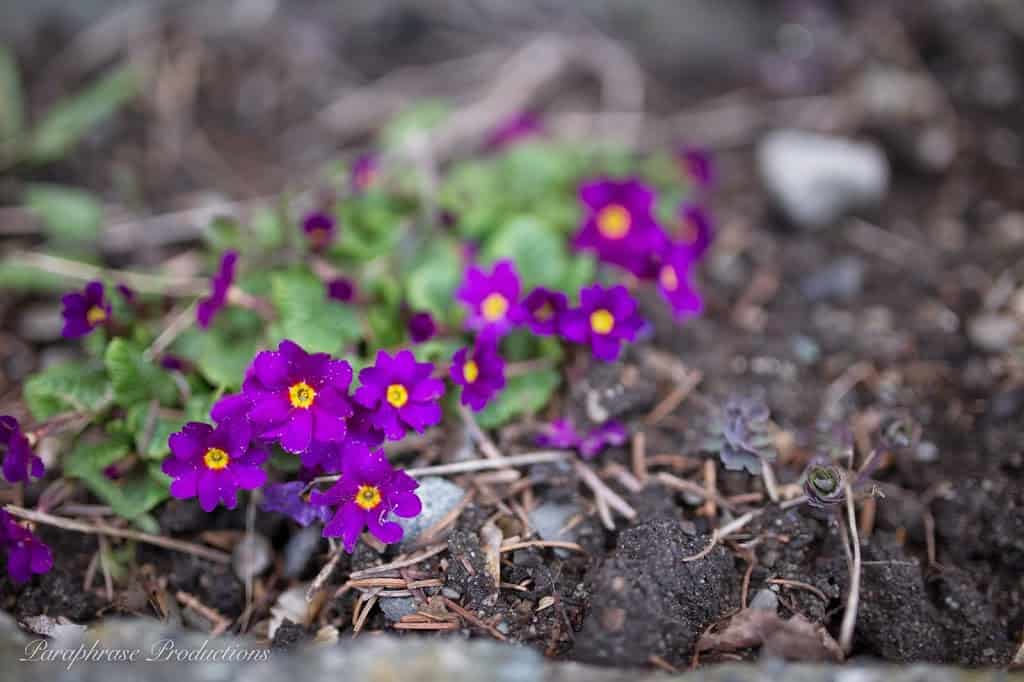 EDIT:  Cropping out the sidewalk and giving it a soft, rich feel. 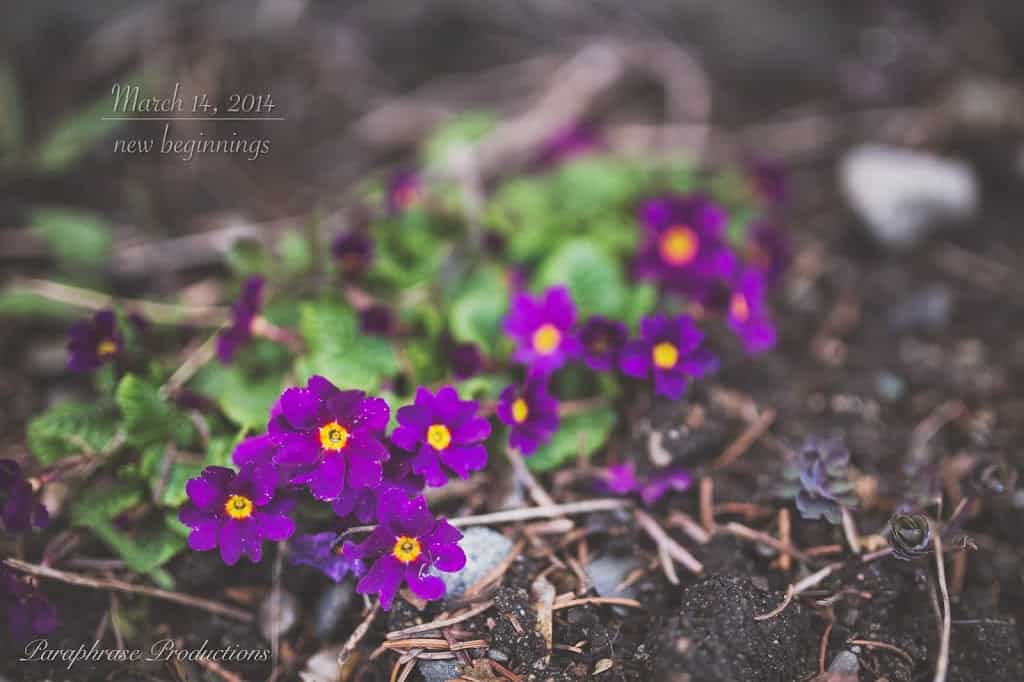 Saturday was our “back up day” since the maternity shoot I was doing for a friend got rained out the previous weekend.  Unfortunately, it was still absolutely pouring this weekend and she’s due in less than a month, so waiting longer didn’t seem wise.  I pushed, and pulled, and hauled, the furniture away from our patio doors in our living room and used them as a backdrop for a few images before heading over to the studio to do some more traditional shots there. 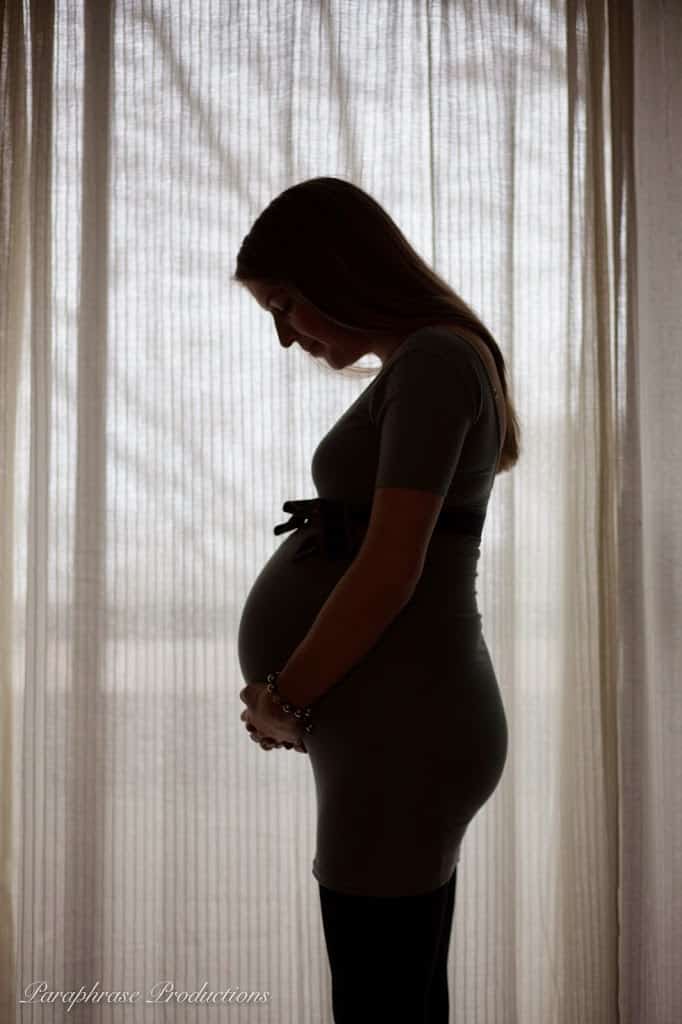 EDIT:  Cropping to avoid chopping her at the knees, converting to black and white, bringing up the shadows to hint at her features, and filling in the edges darker to act more as a frame. 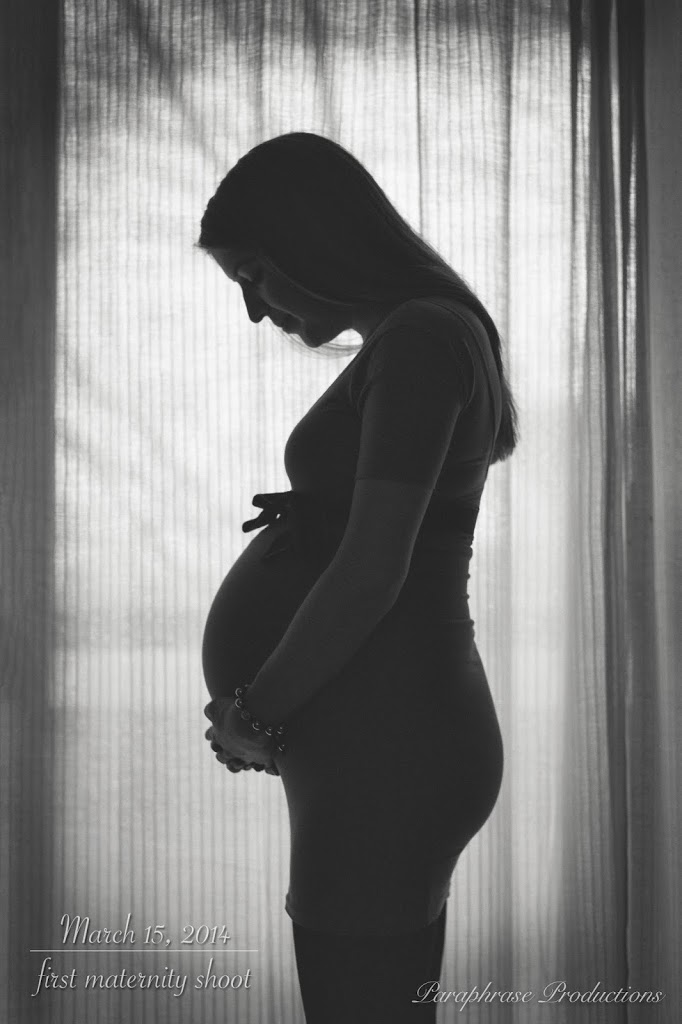 Sunday we went for dinner and games at our friends’ place, and I gained a greater appreciation for all people photographing young children.  This little dude would NOT stay still.  The only reason I pulled off the shot below was because he ended up playing “peek-a-boo” with me for a minute or he would have been off the chair before I could lock my focus.  And no, there was no time to worry about white balance in this instance! 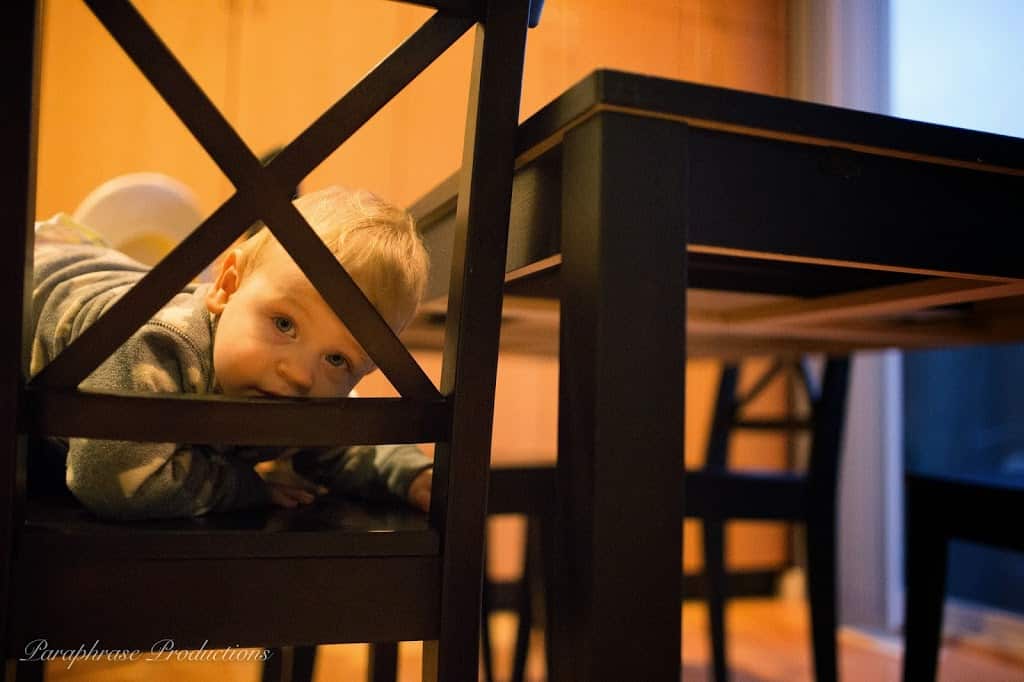 EDIT:  Black and white because of the two contrasting light temperatures of the warm kitchen lights and the cool daylight outside.  It also worked well to make the grain more tolerable as I had to shoot at ISO 8000, and fully wide open to get the shutter speed I needed to freeze this guy in motion: 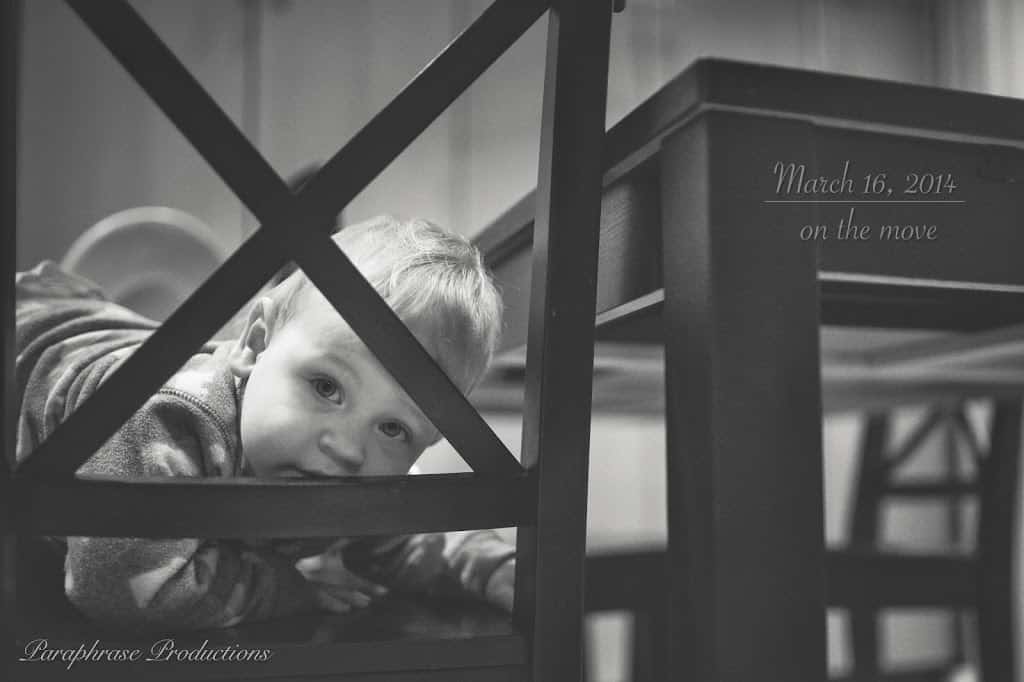 Monday was the longest, most tiresome day I have had in a very long time.  Coming home to my husband was pretty much the only good thing that happened that day it felt like.  There were other good things I’m sure, but none felt so wonderful as being home finally. 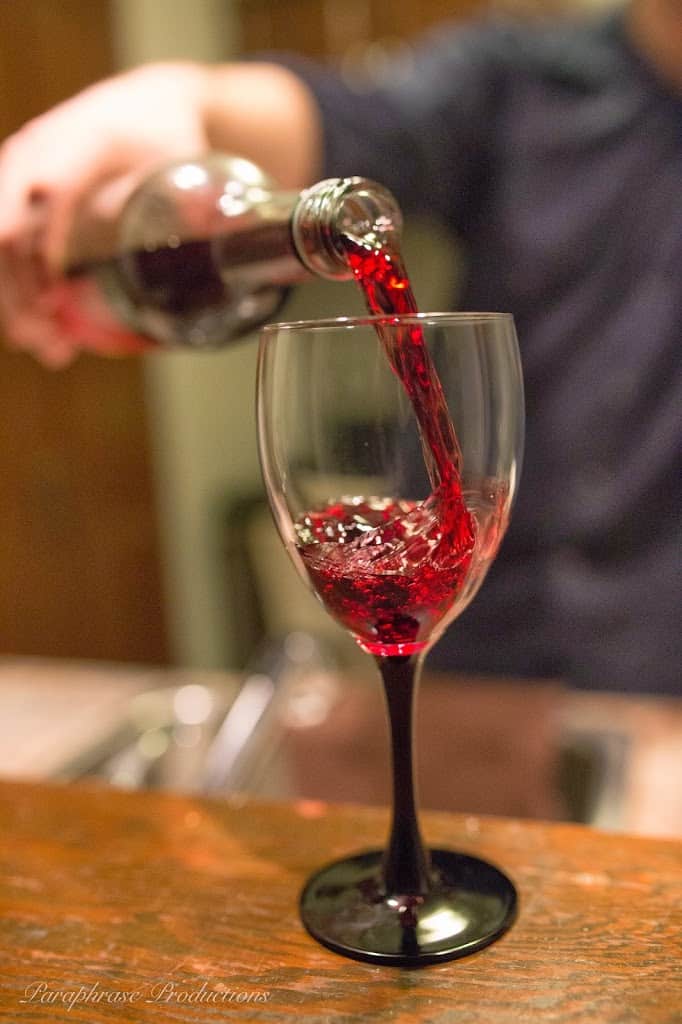 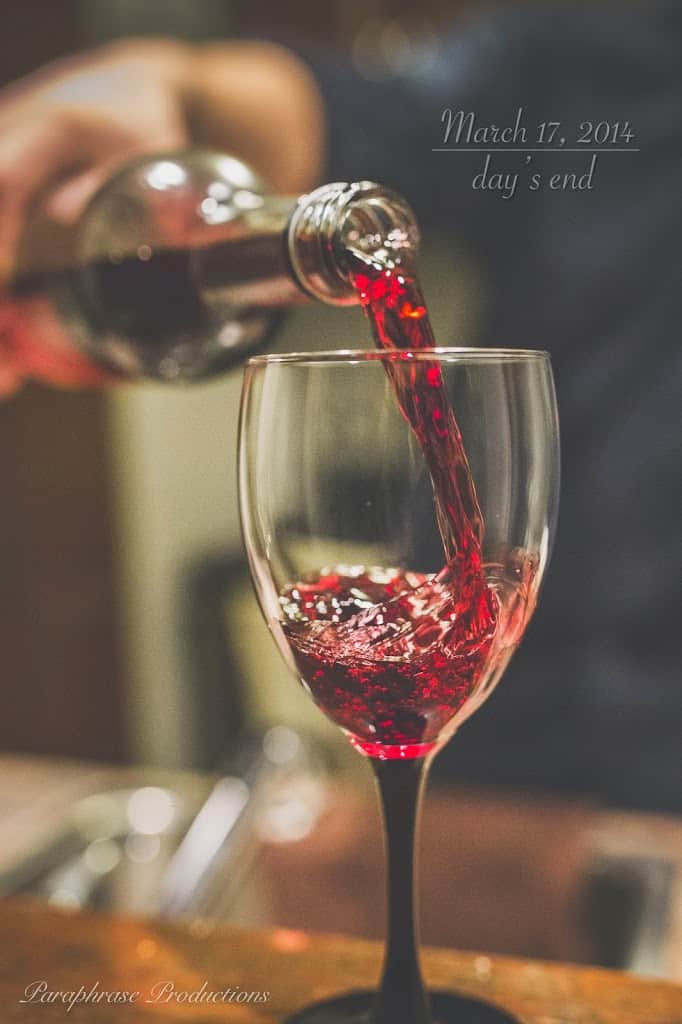 Tuesday (today), I called in sick to work.  Around 1:30 this morning I was awakened by a massively sore throat and a stomach ache.  Never have I been so happy to be coming down with something after Monday.  Emotionally I needed a day at home.  On top of that, my foot was acting up worse than usual from the walk on Friday and the shoot on Saturday, and I really should have rested it.  But those two things wouldn’t have been enough to make me call in sick.  Actually getting sick was the perfect solution to a much needed day of rest.  Thanks body (and God!).  Nick brought me Starbucks and lunch in bed around 2pm, when I finally got up.  (Though I had been up every few hours texting and emailing work since I had to get my poor coworker to cover for me in my absence).  While Nick was on the phone this evening, I went out to the kitchen and pulled out the vase (okay, who am I kidding – juice pitcher) holding the dried remnants of my Valentine’s Day flowers and practiced free-lensing.  That’s where you pull off your lens and hold it about a centimetre away from the camera and shoot.  You have to be really careful to keep dust and particles from getting on the back of the lens or, worse, on your camera’s sensor.   I was a little stressed about these risks, but love the results. 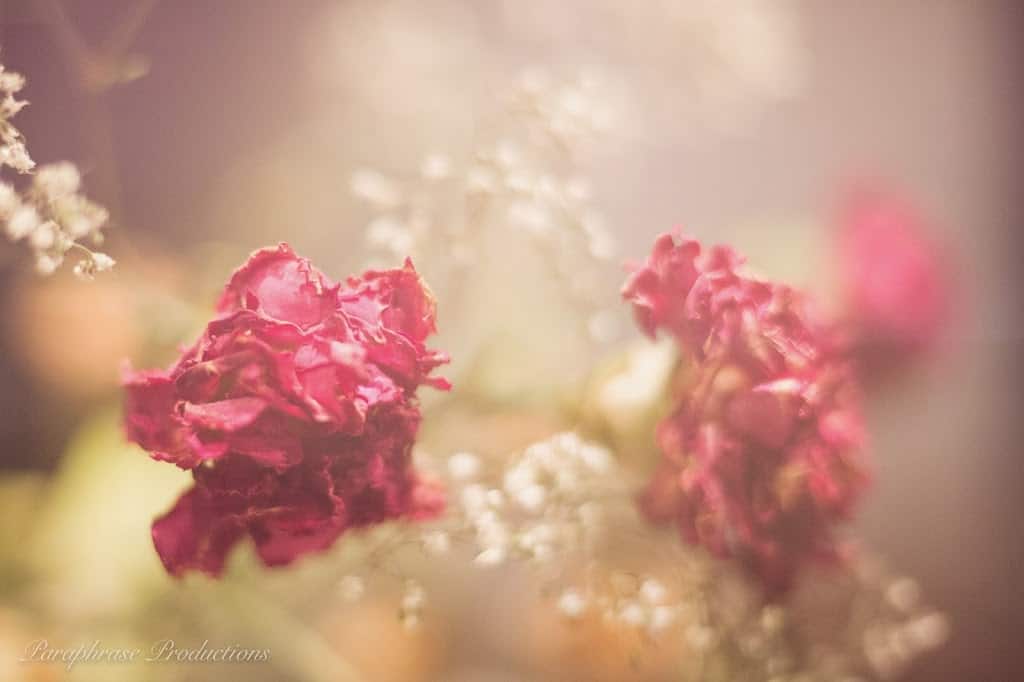 EDIT:  A flip and only minor touch ups. 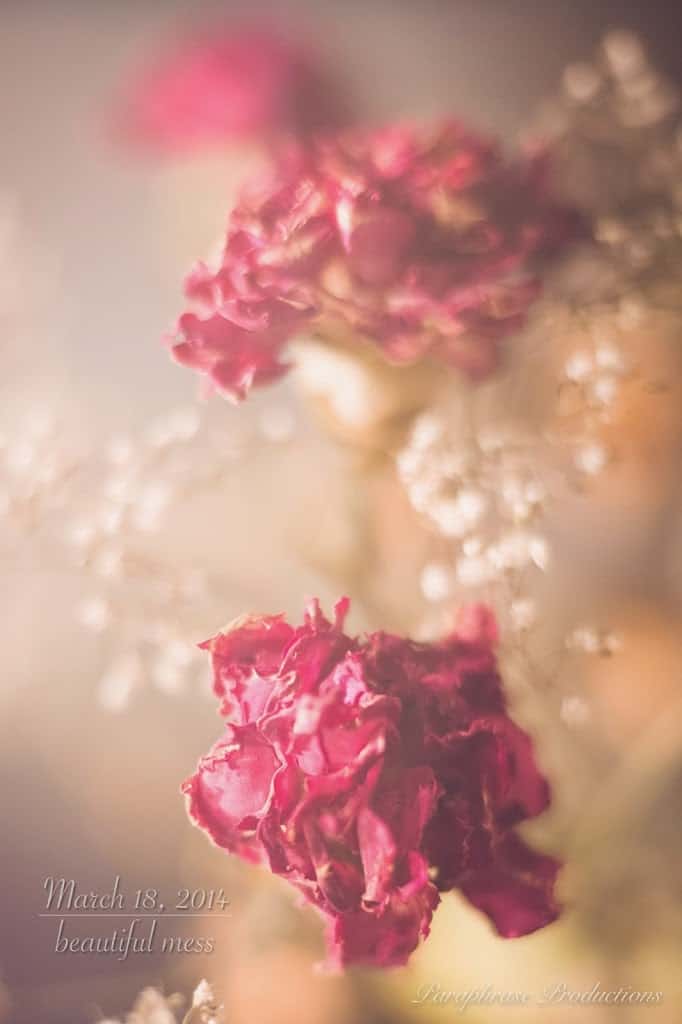 Now it’s off to watch one show and hit the hay so that I’m ready to embrace my inbox and voice mail at work first thing tomorrow.  Especially because I JUST remembered again that I need to be up at 5:15am since I start early as it’s my every-other Wednesday tomorrow.