Here’s the second week of my ongoing 365 project.  So far, so good, and I’ve been managing to keep up with inserting them into my annual photo book as I go along as well which will save me a ton of work later on!

January 8, 2014:
One of my little six-year-old students made all of these bracelets in the picture below.  He made me one as well during his sister’s lesson that matched the family and apparently I’m “part of the family now”.  So sweet.  Wednesday is my busiest teaching night with five students back-to-back in an adjacent city.  Normally I need to rush from this back home in time to make it to our church small group for the later evening.  However, we’re still on Christmas break from that, so Nick and I went and had a $0.25 wing night.  We always buy more than we can eat to use for lunch leftovers the following day.  They charge you an extra $2.00 for a take-away box, but we were smart this time and brought our own plastic containers!  I did get an odd look from the table next to us as I divided the wings evenly into two separate lunch containers, but it was worth it! 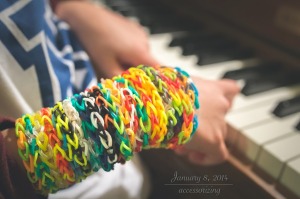 January 9, 2014
Today I was home sick from work.  I got up around 10:45am and realized that I was feeling much better and decided to go in.  I quickly got ready and texted my boss and coworker that I was on my way, but they both said to stay home and just make a fresh start of it the next day since nothing much was going on in any event.  So there I was at 11:30, fully dressed and ready with no where to go.  I was even already on the street and in the car with Nick who was going to drop me at the skytrain station.  We made a quick stop for Starbucks and some flowers.  I had asked him for some to practice on with my new macro filters, and since I stayed home that day, he couldn’t really surprise me, so I got to pick them out myself.  We got home and climbed back into bed together and watched shows.  I’m afraid Nick’s day was not very productive with me laying about.  Then I went to play with the last dying window light and the flowers while he tried to finish up a few things.  This was the best shot from the day, though there certainly were a lot to choose from.  It’s so seldom that I’m home when it’s daylight outside at this time of the year! 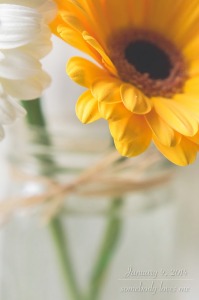 January 10, 2014
Friday night we went and played some board games with a couple friends of ours and it was pouring out.  It led to a lot of fun, interesting shots featured in THIS POST.  We got home pretty darn late, and after decompressing for a couple hours hit the hay just after 2:00am. 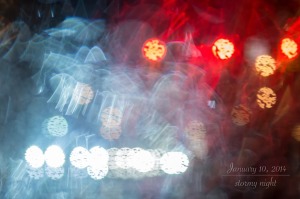 January 11, 2014
Saturday Nick heading off to do a Same-Day-Edit for a wedding and I kept sleeping through until the afternoon.  I am too old to stay up past 1:00am and not feel completely wrecked the next day.  I got up with just enough time to get dressed and head off to worship team practice for the evening, followed by the evening service.  When I got home, I tidied the house, made popcorn, and settled down with Netflix and photo editing.  It was all well and good for about 10 minutes until I noticed my computer power was almost dead.  Upon looking around the bed for my power cable, it slowly came to the realization that Nick accidentally took it to work with him!  Here I was with the perfect evening ahead of me and no computer.  That meant no t.v. (we only have Netflix – no cable), no practicing piano (my sheeting music was downloaded, but not printed yet), and no photo editing.  I didn’t feel like reading and was too tired to work on any chores.  I was stuck.  So I watched Netflix on my phone until he got home shortly before midnight.  He promised me “an evening” to make up for the unfortunate event.  It was doubly unfortunate since the very night before I had said, “Nick, don’t take my power cable to work with you tomorrow.  Go get your own from the church”.  He made up for it though – coming in a later pic. 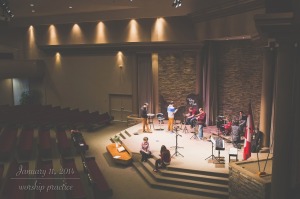 January 12, 2014
Sunday we both went to the early service at church as I needed to play for worship at both of them.  Then we headed home after lunch and Nick offered to help me with all my chores that I had to do so that I could free up an evening.  (Lest you think that “making up an evening” is a silly thing, let me inform you a full free four hours in a row at home to relax with nothing to do is a rare commodity in our household and something that is SORELY missed if it cannot come to pass).  We thought we would have THAT evening together, but it was one of those times where one chore turns into the next.  We had a friend come over and purchase our old desk, which led to much furniture rearranging, which led to a trip to Ikea to get a couple new pieces, which led to pretty much going through every drawer and under each bed in our entire place and getting rid of 6 garbage bags worth of stuff.  I even sorted through every card and photo I had and decided what to keep and what to toss.  We got things down the the “bear necessities”.  I’m a bit of a minimalist and Nick’s a bit of a pack rat, so we compromised where necessary.  Loving that I can now SEE the wall in this picture where before there would have been book shelves! 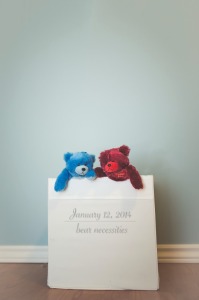 January 13, 2014
The make-up evening!  We finally managed to somewhat salvage an evening and some relaxing time.  Here was Nick’s sweet gesture to me to give me some of that evening during the week.  On Monday, I have 45 minutes from the time I get home from my 8-4 until I have to leave again to go teach three students.  I came home to this lovely candlelit supper which actually succeeded in making me stop looking at the clock for 20 minutes and forget I was between jobs.  He tidied up everything afterwards and I headed off to teach without starving or worrying about making something after my last student left.  My final student of the day was back at my house, so I finished teaching her by 7:50pm, and then Nick helped me FINALLY take down the Christmas tree.  I admit, I got distracted for about an hour when I was putting it away in the closet and gutted ANOTHER garbage bag’s worth of stuff out of there.  I still have to gut the other half this weekend and then our house should be almost totally sifted through for unnecessary junk.  Then I edited and uploaded photos for the group I’m overseeing this year, and we watched Sherlock Holmes together.  Not before Nick ran out to 7-11 and bought $0.05 candies to eat while watching, though 🙂 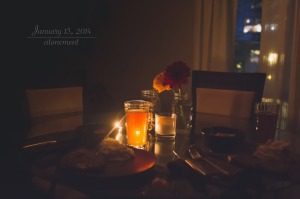 January 14, 2014
Today was just one of those really long days.  I woke up tired.  I went to work tired.  I came home tired.  And I watched the clock all. day. long.  Early to bed tonight! 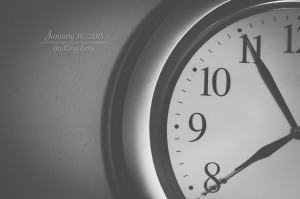