This year, I’m doing another 365 (a photo each day for a year), though technically it’s a 366 since it’s a leap year.  However, January is also the month our little one decided to arrive early so I’m combining this post into a “birth story” as well since I’ve had a few people ask after it.

January 1st started out with us staying in and playing board games with Nick’s mom and sister, who have both moved to town this month, instead of venturing out to find some fireworks signalling the arrival of a new year.  We pulled up some couches and grabbed some snacks and settled in for the evening.  What I didn’t know was that that was my last night of only feeling morning sickness (it was a rough holidays for that).   The next day I woke up to the beginning of the 28-day flu that had me bedridden for almost it’s entirety and briefly hospitalized.  I started off on the couch with movies, but we eventually blew up our queen-sized air mattress and made a semi-permanent bed for me in the living room so I didn’t spend all night and all day stuck in the bedroom.  A couple weeks in (before the regression) I felt better enough to enjoy my baby shower and do a couple evenings of piano teaching as long as I rested for the remainder of the day, though. 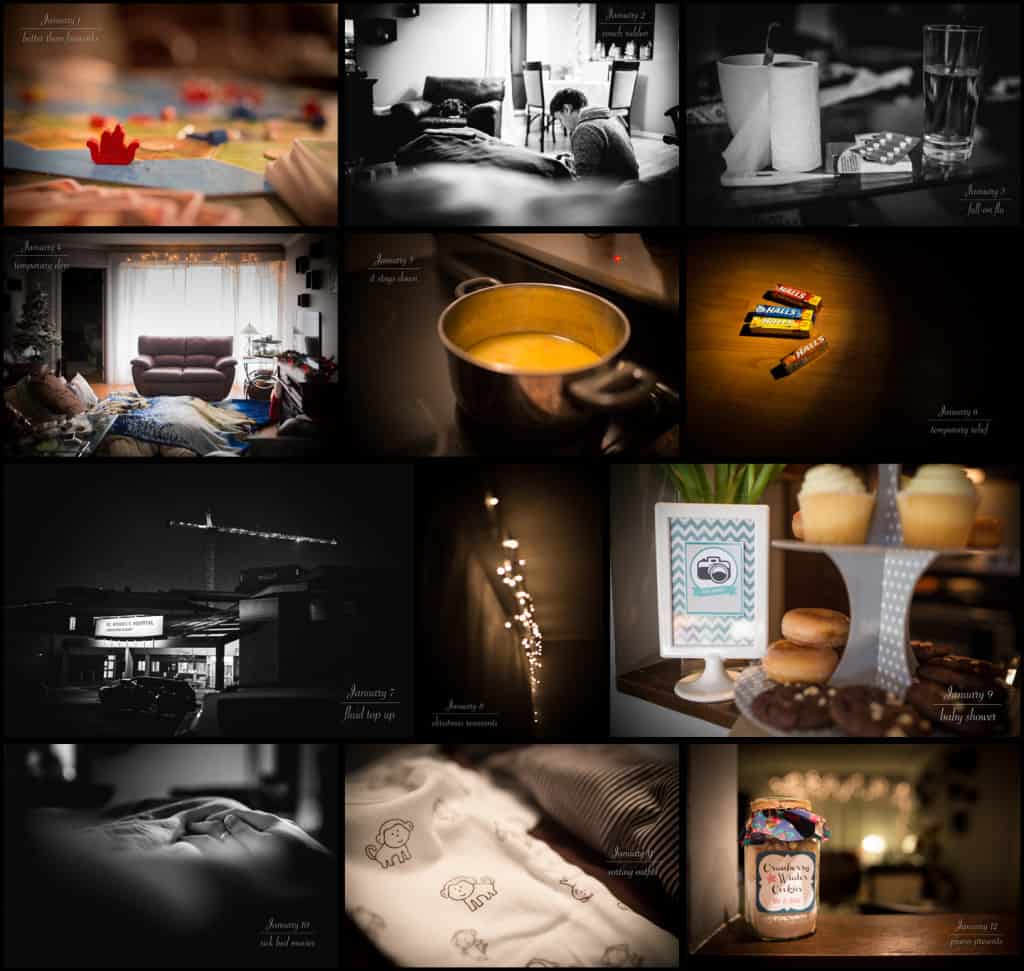 Mid-month, on my way to feeling slightly better, I had a routine pre-natal appointment where my blood pressure registered abnormally high – 130 over 80 I think.  Not too bad, but since I was feeling SO nauseous (way worse than first trimester morning sickness), and was complaining of an allergic reaction to meds that my doctor said I shouldn’t be allergic to, she sent me off for some cautionary blood work just to be safe.  Sure enough, I got a call from my doctor late that Wednesday evening saying I needed to go to the hospital to have my blood drawn again as it looked like I had acute cholecystitis, which explains the extreme sickness and the itching (the assumed allergic reaction).  That particular condition also runs the risk of having a stillborn, so we journeyed the hour into the city after confirming with her that I wouldn’t need to spend the night there.  It’s a good thing we backed our toothbrushes “just in case” as that was the last time I saw the outside world until I left nine days later with our son!

While they were checking my blood, they decided to take a urine sample “just in case” anything else was up, and it turns out I also had pre-eclampsia.  They said if I had one condition OR the other they might take a different approach, but because I had both, I would be being induced the next morning to get the baby out.  Well, the next morning came and went, and soon it was late the following night.  During that day, the internal medicine team (who were following my “interesting case”), decided that maybe I didn’t have pre-eclampsia, and could elect out of the induction.  However, they weren’t the team of doctors that originally diagnosed it.  (Nothing more frustrating than different teams of doctors guessing what could be wrong with you).  I said, no, we’re here now.  I still have one condition for sure that threatens my baby.  Let’s do this.  (Plus, I had already been told he was over 7lbs a month early, so getting him out sooner sounded good!!).  Finally, they had an opening for me at about 9pm, and I went down for the induction.  They discovered that I was already 1cm dilated (which explains the contractions I had started to feel the weekend prior), and thought it would be a quick process.  Well, they were wrong!  Four days, four inductions, three doses of morphine, and an epidural that took three hours to kick in later, I was finally fully dilated and ready to push.  After four days of regular contractions every couple of minutes (save for a few hours where it wore off before the next induction), I was so ready to be done!  I pushed for 25 minutes and then they cut the induction drugs completely because I was contracting so often.  Unfortunately, that stopped the whole process and we had to wait another 20 minutes after turning the drugs back on for the contractions to start again.  Then another 25 minutes of pushing and he was out!

We waited in the delivery room for a few hours for him to be checked out, stitches for my first degree tears to be administered, and the epidural to wear off so I could bear weight on my legs again.  Then we were back up to the room for all of 20 minutes before they took him out to the nurses station “for a couple of hours” to monitor as he was grunting and showing signs of laboured breathing.  Then a couple hours later, he was admitted to the NICU “just overnight” to watch.  However, he ended up on antibiotics as a precautionary measure against infection being the possible cause of his breathing issues, and on an IV for his low blood sugar.  Thus, he ended up staying there for a couple of nights.  During that time, my flu took a turn for the worse, and I ended up on antibiotics and steroids myself as 50+ hours with no sleep had taken their toll.  The 50+ hours were after labour as, without the morphine, I found it impossible to sleep not in my own bed and it was all downhill from there.  I was JUST in the process of getting myself discharged as I was too sick to visit him in the NICU and getting no sleep night after night at the hospital, when they said they were bringing him to our room for “one more night”.  Up he came, and we finally had our first night with him.  I slept mostly with him on my chest to keep him calm, and he barely moved despite my bouts of coughing all night long.  The next day we attended our discharge class, packed our bags, and then had a doctor come in and tell us that he was too jaundiced to go home, and would need to stay “one more night” under the lights with us.  “Maybe tomorrow” became my least favourite phrase quite quickly!  But finally, the next morning, nine days later, we were headed home! 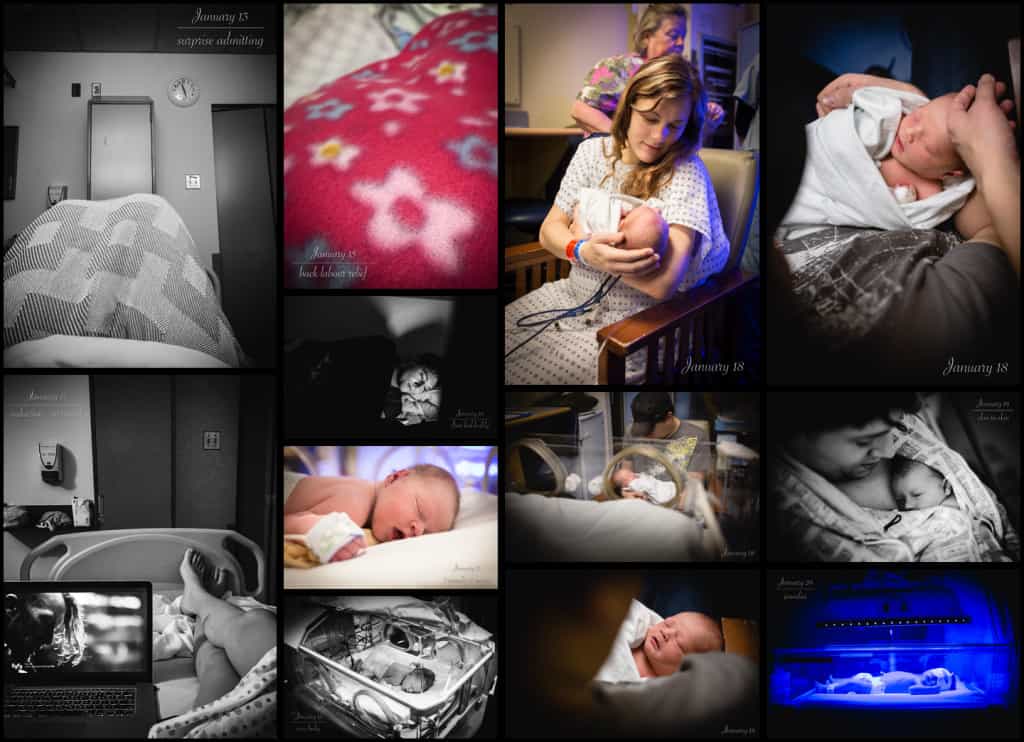 The next couple of weeks were a whirlwind.  We had doctor and nurse appointments every other day (literally – Friday, Saturday, Monday, Wednesday, Friday…).  Micah came down with thrush on top of it all, and he wasn’t (still isn’t!) gaining his birth weight back fast enough.  The days we were home, we had tons of family and friends come by to support and help us.  We were so grateful, but I yearned and literally cried for what I had imagined my short mat leave to be – just the three of us existing together and figuring it all out. 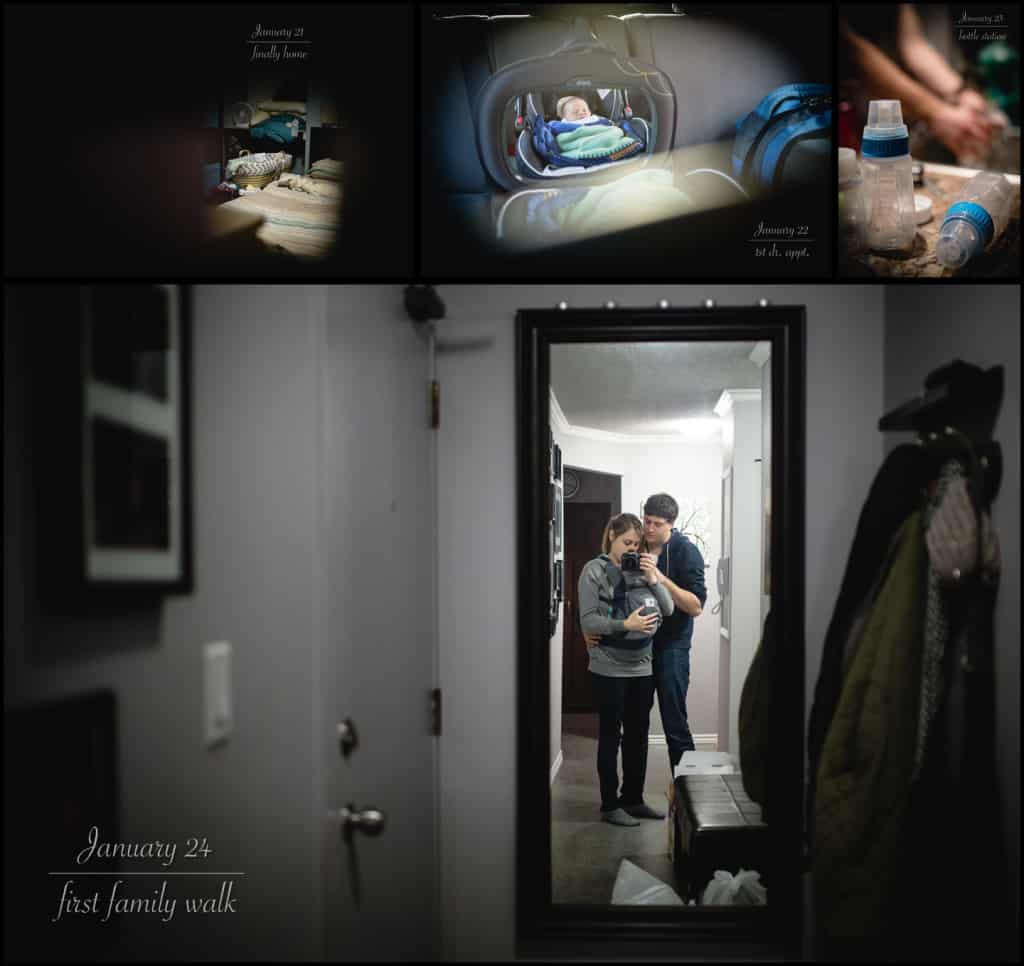 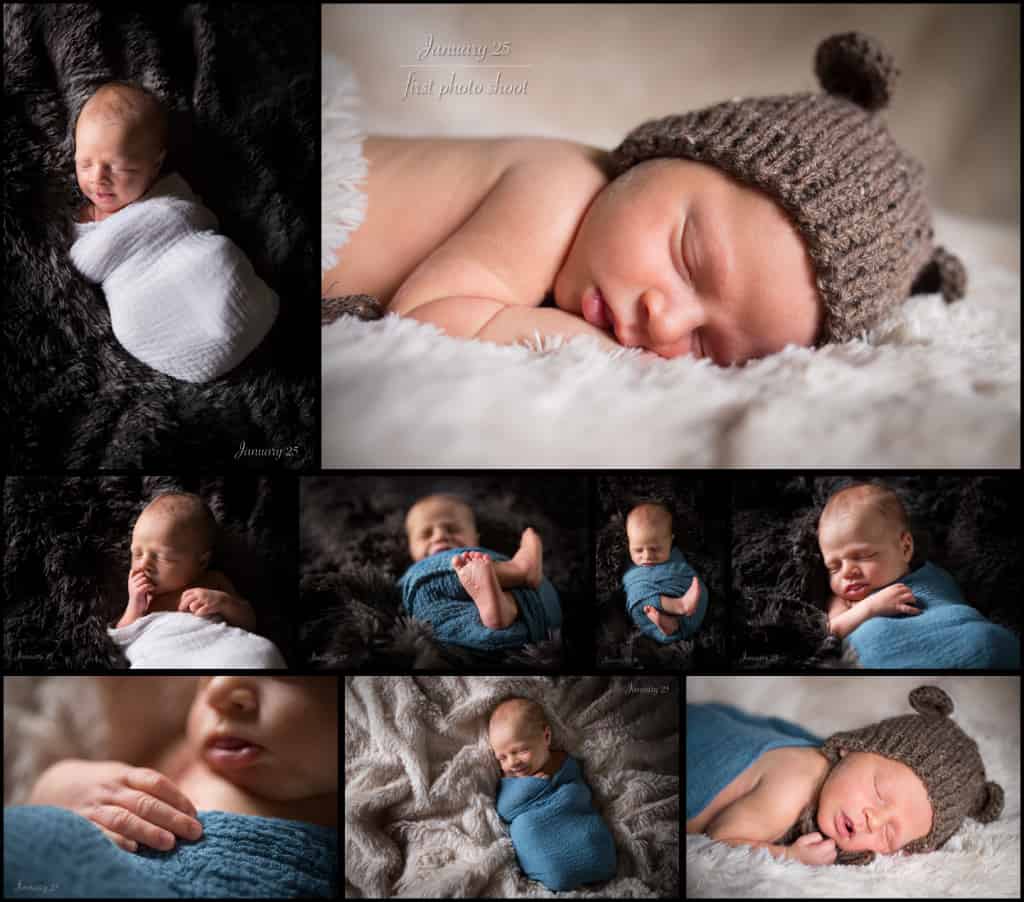 During those first days home, we also had to catch up on emails and do a few work things that just couldn’t be rescheduled which had been put off as long as possible for “one more day” every time we were offered the hope of leaving the hospital soon.  We took Micah in shifts and worked with him on our laps as needed.  We finally carved out a Sunday and a Monday to have that time I craved, though. 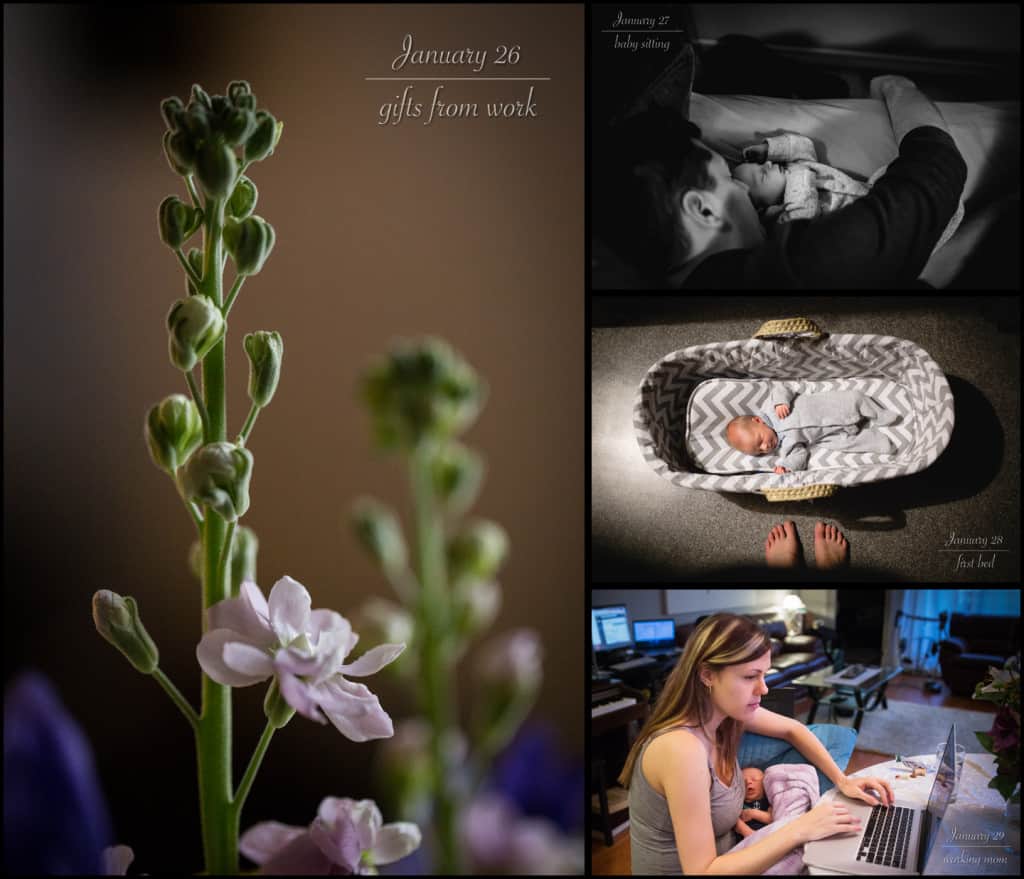 Saturday night (before our two days of “just us”), Micah met his one set of grandparents for the first time, and then he settled in for his first bath (which he surprisingly didn’t hate!).  Then it was finally time!  We pulled out some movies, lived in our pajamas for a day and a half and ate ice cream and all the wonderful food people brought by.  We enjoyed our time together as a new family, well-loved on by our community, and now privately getting used to each other without distractions.  It made my momma heart so happy! 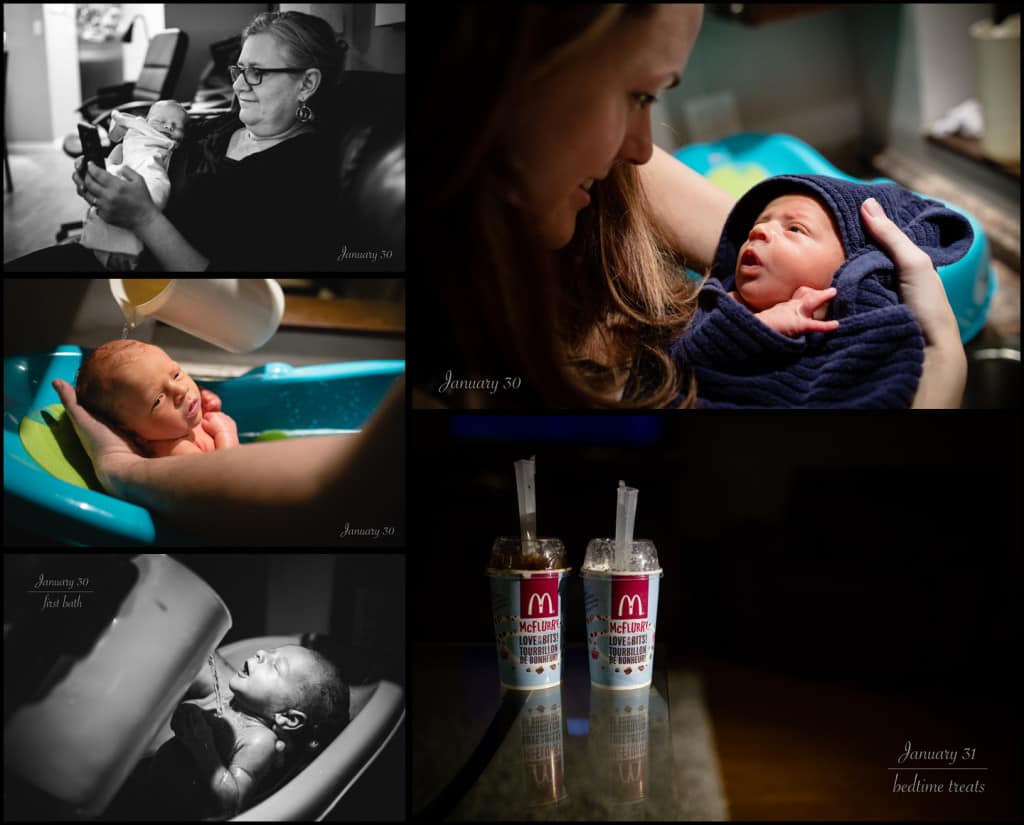 And now it’s February.  We’re both back to work and figuring it out one day at a time.  I’m SO in love with this tiny human that I can barely stand when I have to go out of the house and leave him.  I’m so thankful most of my work is from home.  I already want another one.  You think I’m joking, but I totally put the prenatal vitamins and morning sickness meds back on the shelf instead of passing them on “just in case” I get pregnant again soon.  I never knew that I would love motherhood so much.  I feel so blessed that I get to have this time in my life – every sleep deprived day is precious to me.  Sure, it’s not easy, but it’s a wonderful kind of hard.