Sunday, May 11, was our first day home after our trip.  We had done most of our chores the previous night, so we enjoyed some relaxing time before getting back into “real life”.  We pulled out the hide-a-bed in the office and binge watched a new Netflix show.  We didn’t even go grocery shopping, but found a chicken and some garlic bread in the freezer instead.  We threw it in the crock pot early on so it was ready by the evening.  It was a truly lazy day after such a long time on the road: 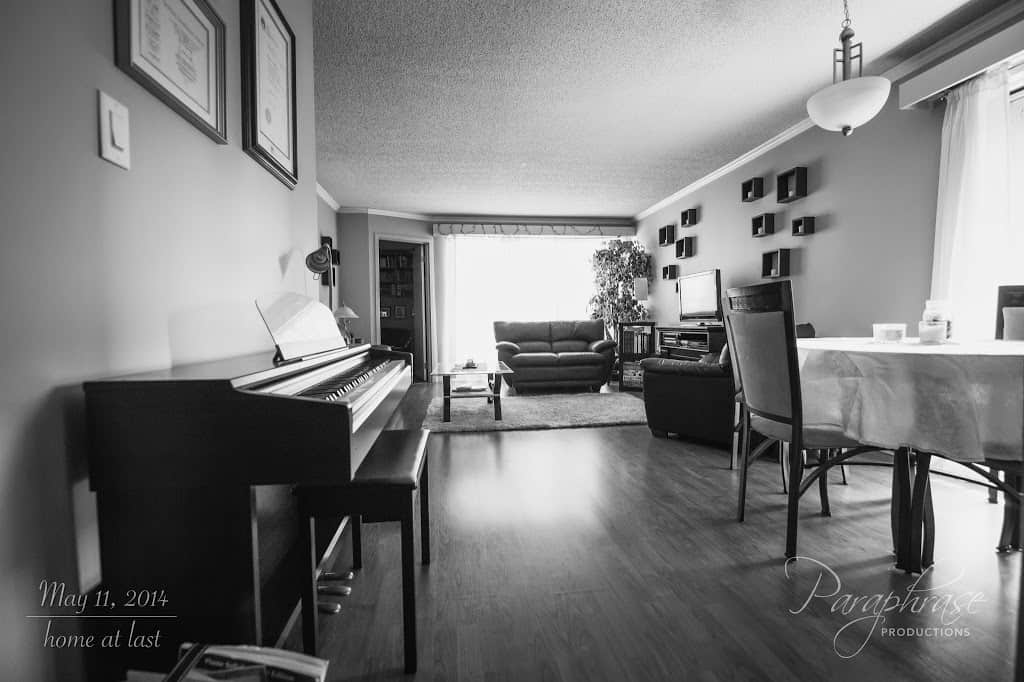 Monday morning hit with a rude awakening.  Also, I was surprised to have sunlight coming in through the window so early.  When we had left almost a month prior, I was still getting up in the relative dark.  I spent the majority of the day dealing with the 116 emails in my work inbox, and I was actually fully caught up by the end of the day thanks to help from my co-worker.  I went home and taught my four evening students until just before 8pm and was fully back in the swing of things after today. 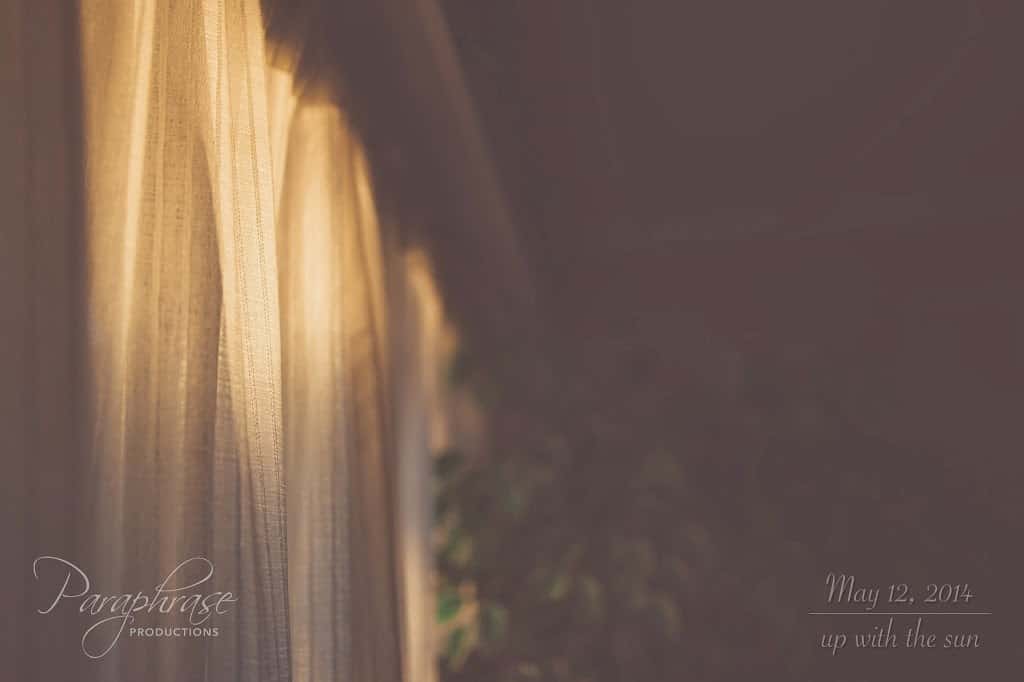 Tuesday I discovered something else that had changed while we were away.  Sunlight AFTER I finish piano teaching.  When we left it was always just setting with my last student.  I took advantage of this to actually go OUTSIDE my apartment that evening when I finished my last student and grab a few snaps.  (This is a big deal.  I almost never leave my house except to commute places since I start and finish in the dark most months out of the year.  And if I don’t, it’s usually raining.  Yay, Summer!). 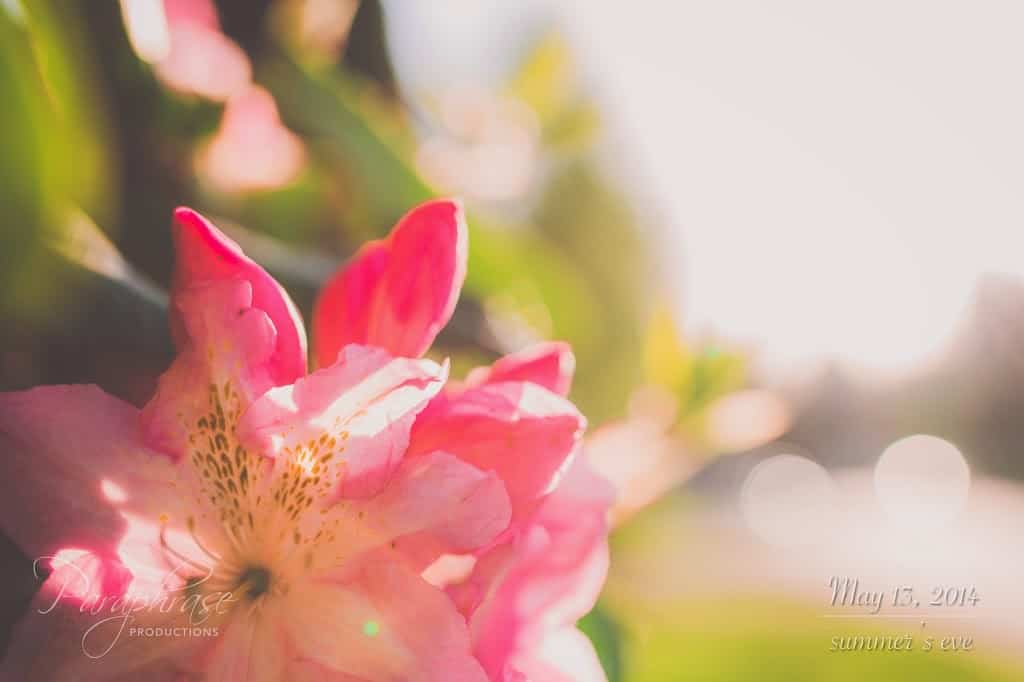 Wednesdays have changed a bit for me.  I no longer teach in an adjacent city every other Wednesday and then run to Life Group.  I teach in that city EVERY Wednesday due to a change in my hours at work for a 6-month project that make it so I no longer have time to squeeze all 5 students in that night back-to-back.  I now do 3 one week and 2 the next.  However, Life Group has also finished for the Summer, so I feel like I actually have more free time even though I have an extra couple trips out there each month now.  If Nick comes to pick me up, I’m still home by 7:30.  And when he’s late to get me, I get to enjoy a bit of sun :).  We also bought groceries this night for the first time in like 6 weeks?  7 weeks?  Most expensive grocery run of our entire married life so far! 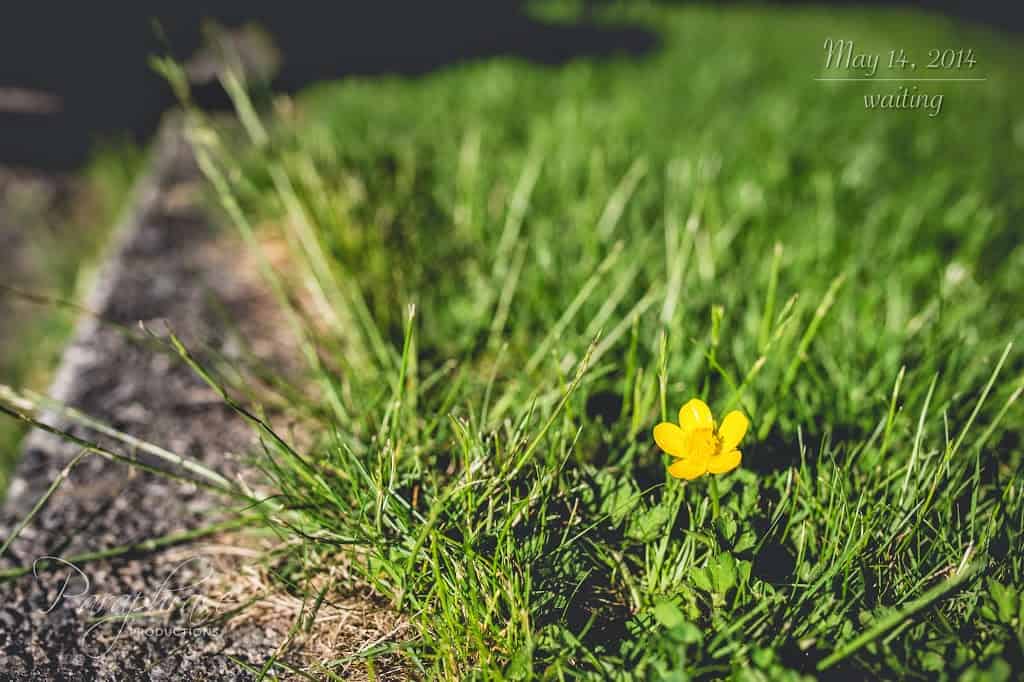 Thursday evening I just taught one student after work,  so I enjoyed some time watching a chick-flick on the computer while Nick pulled a bit of a later night catching up on some edits that piled up while we were away.  I also enjoyed having real food in the house again and not scavenging through the freezer like we had actually been doing for the past four days since returning! 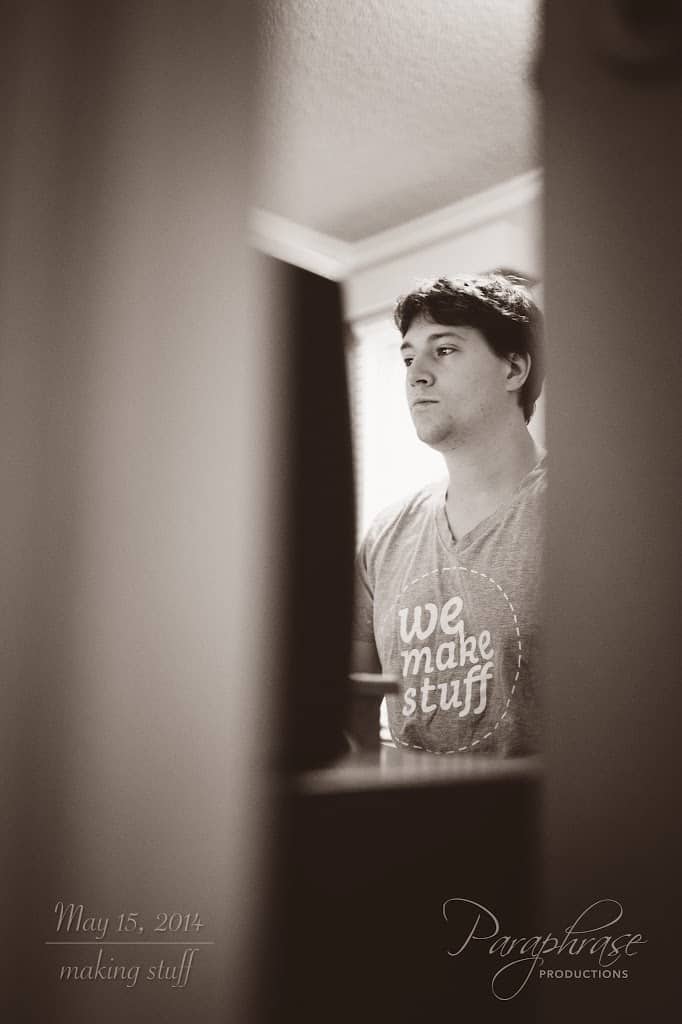 Friday night I didn’t have any make-up lessons to teach, so I have a wonderful dinner date with my mentor and caught her up on the trip.  We went out for Vietnamese and then headed over to her place for home-made lattes.  She dropped me off at home around 9pm, but Nick wasn’t due back from his guys’ gaming night until closer to midnight.  So I relaxed, and took some photos of the wonderful “free” flowers I got mid-week.  I’m emphasizing the word free because the amount we spent on groceries to warrant the free flower gift still makes me cringe, haha.  $400 might be normal for some people, but we’re just TWO people.  Anyways, we probably won’t go again for about a month, so I suppose it all balances out 🙂 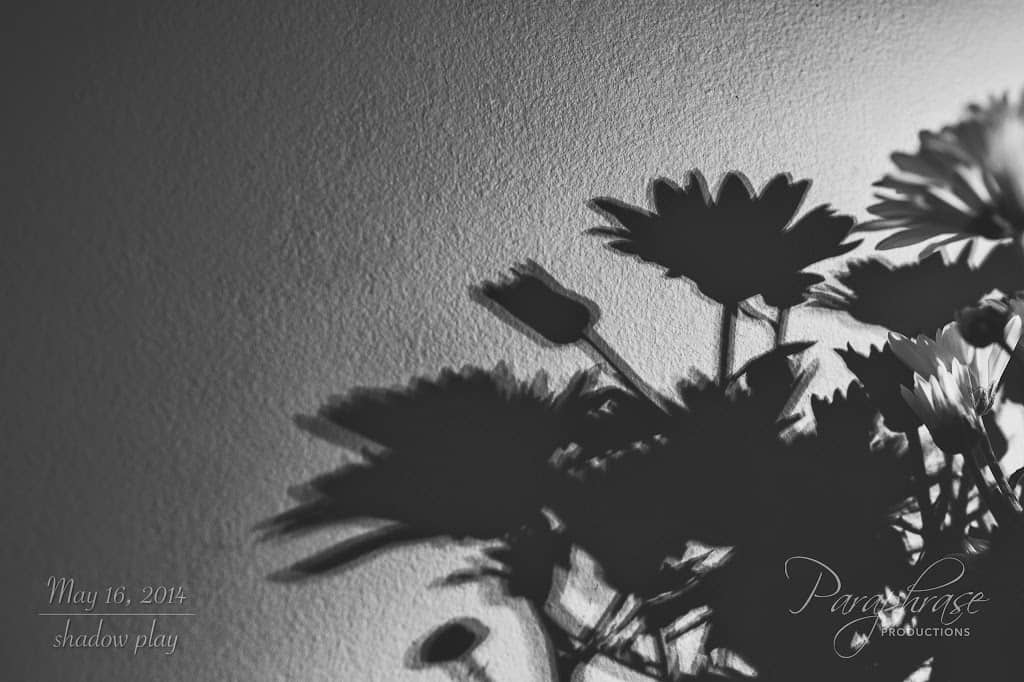 Saturday was another glorious do-nothing day.  I love do-nothing days.  They are my favourite.  We watched a lot of Game of Thrones as we found out that someone had created a censored version online with all the nudity and explicit sex scenes either removed or blacked out.  Some of the edits are obvious (like when half the screen is blacked out and you can only see one person in the frame), but a lot of them Nick and I can barely tell.  This is a show we started watching when it first came out, and loved, but realized that there was simply too much porn in it for us to be comfortable with.  So we’re really excited that we can finally catch up.  We got through almost an entire two seasons this weekend!  As a result, I realized at about 11pm Saturday night that I didn’t take a single photo during the day, so ran out and grabbed my trusty flowers again 😉 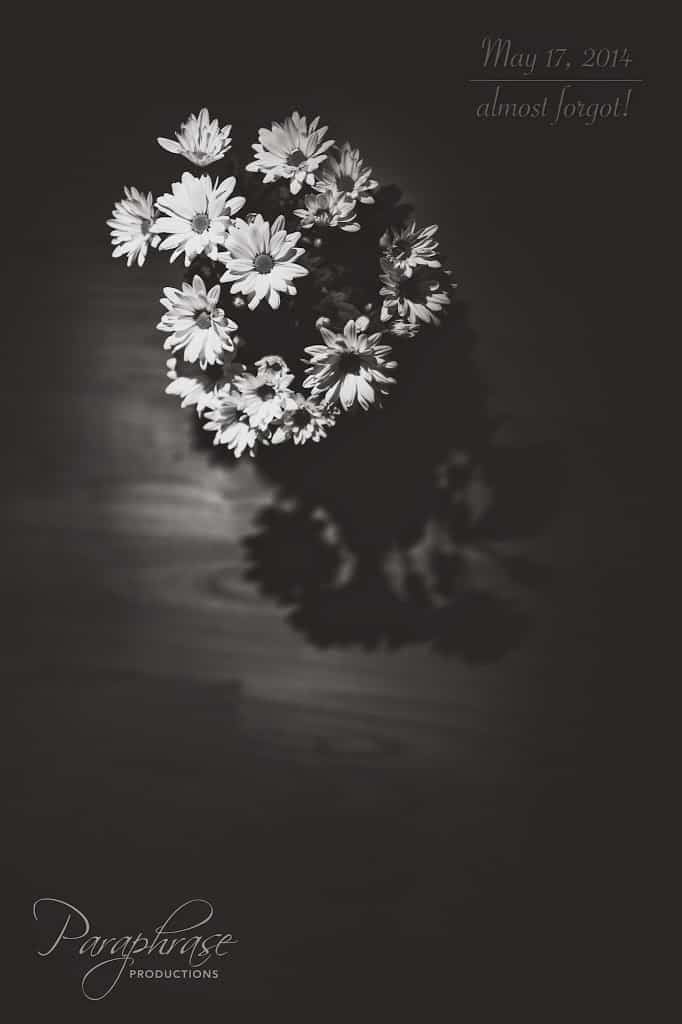 Sunday after church Nick and I went on a date.  He took me to my first Mongolian BBQ and we grabbed some Gelato afterwards with a dairy-free option for me :).  In fact, it was such a perfect day, I did a small mini-blog about it HERE. 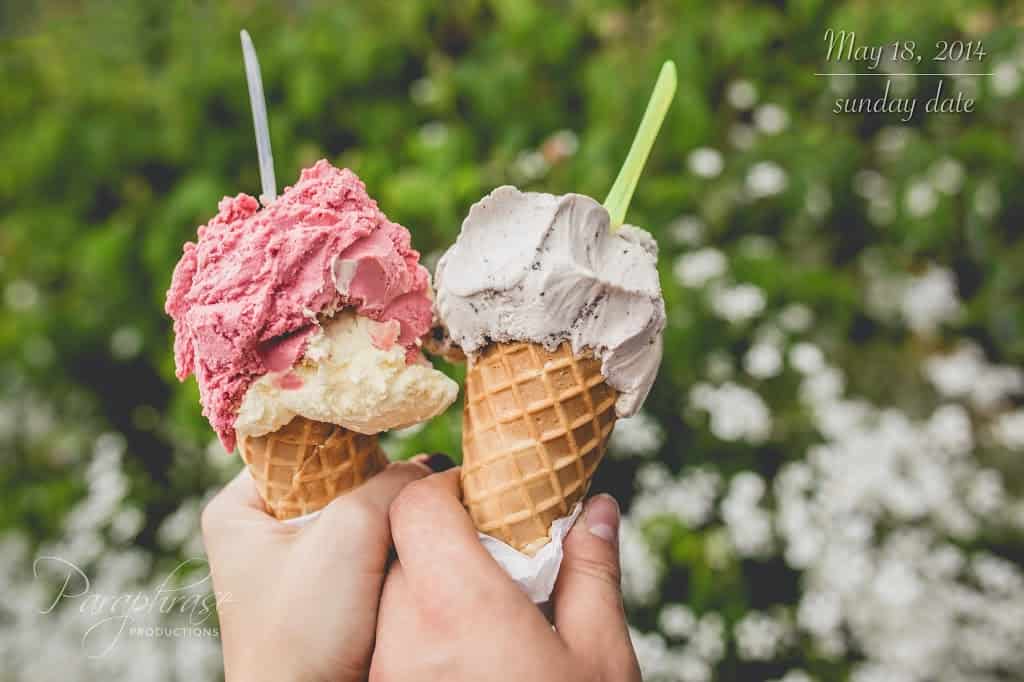 Monday was a holiday, but it didn’t really feel like one because I had so much to do.  I did get to sleep in until 10am, but being up til past 3am sort of offset any benefit from that!  I got up and headed out the door by 10:45 to teach a couple of my evening students who I moved up.  (I always give my stat-day students the option to adjust their lesson times on holidays).  I was back just after lunch and spent a couple hours proofing our trip’s photo album as there was a 60% off sale that ended today and our book was going to be over $200 to print, so I really wanted to take advantage of that.  I’m sooooo excited to see it as the order is now in!

After that I spent some time helping Nick set up some Paraphrase Productions templates and also had to do up a contract and invoice for a wedding client I booked for later in the Summer.  I didn’t quite finish this before my friend arrived to practice a piano duet with me that we’re performing at my recital next month.  (If my students play, it’s only fair I do, too).  She stayed for about an hour before my third student of the day showed up for his lesson around dinner time.  I finished my lesson with him, and then went back to finishing my wedding invoicing.  I had just under an hour before my last student of the day showed up, so we ran out to do some errands.  One of these errands included using up our Groupons for ice-cream cakes that expired in a week  ($28 per cake purchased for $16 per cake!).  It’s a month late for Nick’s birthday and a month early for mine, but whatever :).

I taught my last student from 7:15 – 7:45, while Nick completed the errands, and then finished some more invoicing as I realized my computer is going in the shop for a couple days and I had some piano stuff that needed to be sent out by mid-week.  Afterwards we BBQ’d some salmon and veggies and settled down around 8pm to have dinner and continue to catch up on Game of Thrones.  (We’re only 7 episodes behind now – we’re fast 😉  ).  Then we sang Happy Birthday to ourselves, and blew out the candles.  I was mean and blew them all out, so I relit them and we did it again so Nick could blow out his own, haha.  And yes, my cake is going to last a very long time or I’m going to suffer because there’s not a lactose-free version of ice-cream cakes! 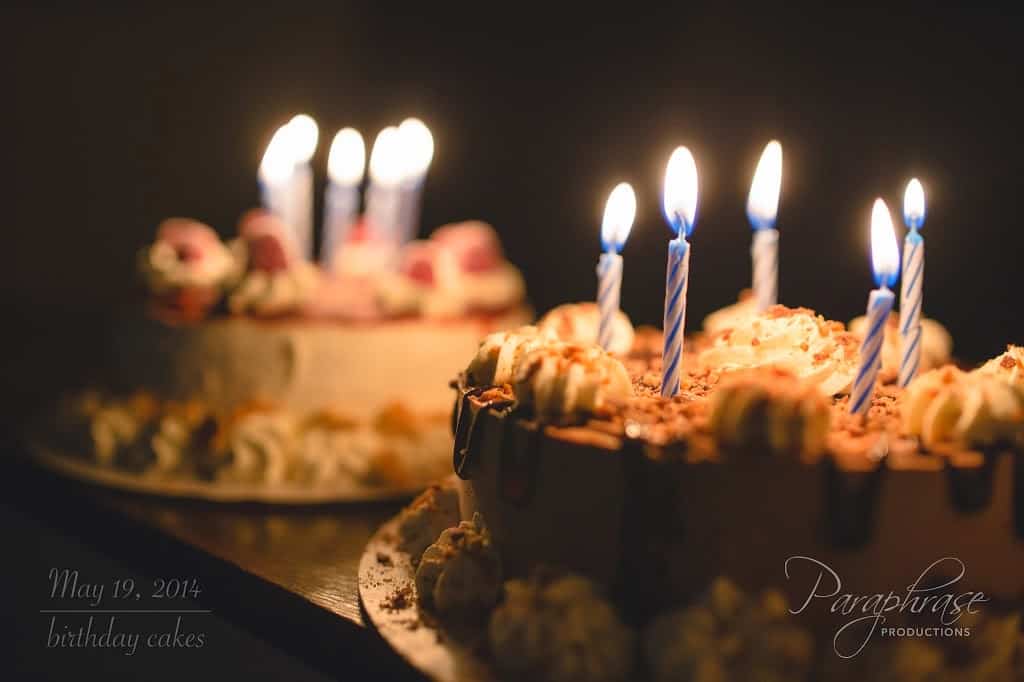 Mine is raspberry cheesecake and Nick’s is Swedish chocolate with Skor.  Mmmmm.