Tuesday, June 17th, I may have set a record for how late we ate dinner.  Actually, scratch that.  (We ate dinner at 11:00pm last night).  Ironically, part of the reason for the delay was because I was working on this photograph.  I didn’t want to control my camera from my phone.  That would be too easy.  (Actually, I just forgot I could).  I also certainly wouldn’t want to pull out the tripod when I could create a precarious tower of books and magazines on top of my piano bench in the hallway to perch my camera on.  Selfies are hard work! 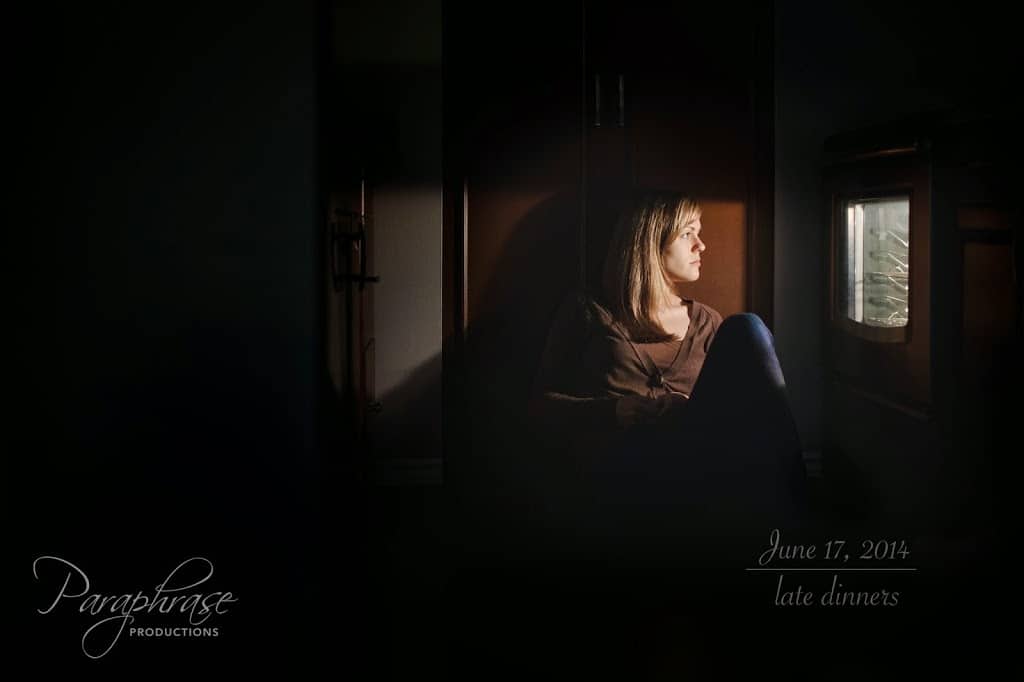 Wednesday was my last Wednesday teaching night until September.  Most of my students go through the Summer in some capacity, but none of my Wednesday kids do :).  Nick picked me up when I was finished, and we came home to make dinner and snuggle on the couch watching t.v.  It was probably my most relaxing evening all week.  Not the most fun (that comes later), but the most relaxing for sure. 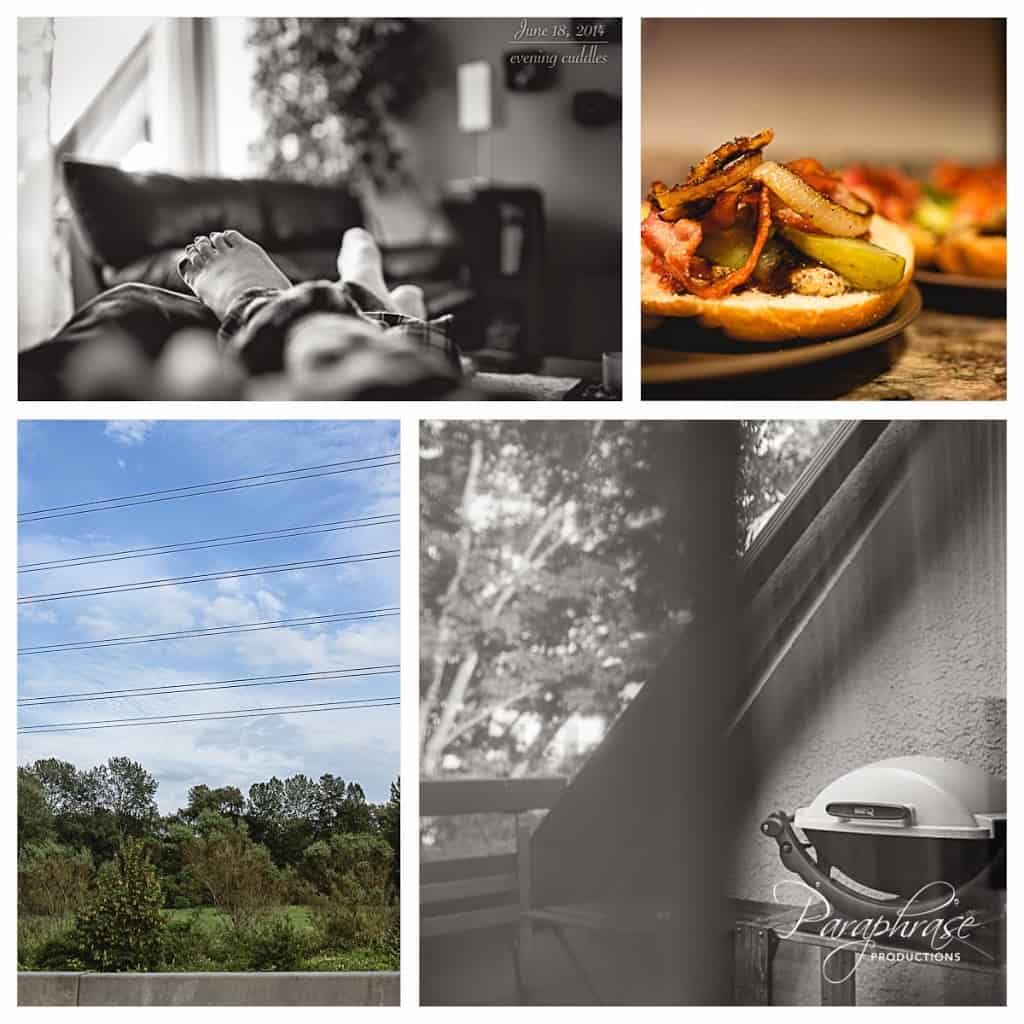 Thursday was my birthday.  29.  I have one more year until I hit my mid-life crisis.  (I have been dreading 30 ever since I turned 25.)  I had a grown-up birthday.  A grown-up birthday is where, even though it’s your birthday, you have to get up early and go to work.  But, it was still awesome.  My husband gave me $20 to buy lunch instead of eating the snacks in my bag.  He also gave me the remainder of his Starbucks card to get a soy latte – a vast improvement to my regular, home-brewed, cheap coffee in a travel mug with almond milk.  (Almond milk in coffee is gross, btw.)  I further got to start the morning with a great conversation with a colleague about faith that was really encouraging to me.  And I even let myself wear jeans (though technically I’m not supposed to if it’s not Friday).  1.  Because it was my birthday.  2.  Because I got burger grease on my work pants the night before.
When I got home that evening, I only had one student to teach since the other asked to move her lesson due to a work conflict this week.  I was done teaching by 6:30pm, just in time for Nick to come home and pick me up.  We went out and made it to the camera store with 20 minutes to spare before they closed.  This was good because it took me that long to pick out my present.  My current camera bag BARELY fits my camera in, and now I have one that fits not only my camera, but a spare lens as well.  He also bought me a soft lens case to hang on a belt for when I’m shooting weddings.  I got really tired of running back and forth at the last wedding I did and have now decided I’m shooting with a belt.  (He also gave me his belt – he just doesn’t know it yet).
As a side note, I didn’t mean to become a wedding photographer.  In fact, I’m pretty sure I said I would never be one.  However, I shot my first wedding a few weeks ago, and now I somehow have between 10 and 13 on the radar for the remainder of the year – mostly through friends and a couple companies offering me to either intern or shoot with them.  I’ve only booked one completely on my own.  However, I have an inkling that I may be opening a whole new horizon after this Summer, and I’m excited about it!
Anyway, back to my birthday.  Afterwards, we stopped at the grocery store and picked up some steaks for dinner, and I grabbed a new pair of earrings because I lost my old ones.  Yes, I just have one pair.  No, I don’t want the responsibility of having to switch them out.  One is good. 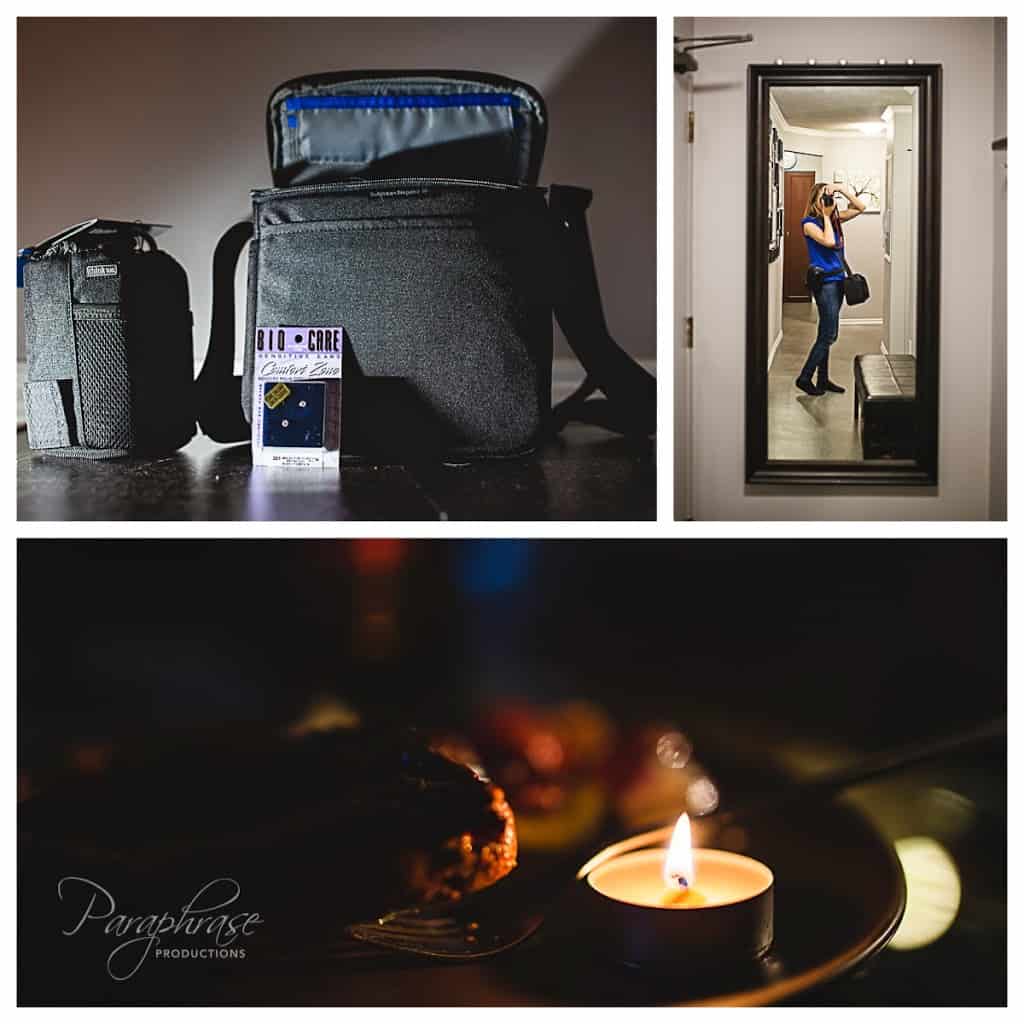 Friday night, after work, we headed over to see our friends’ new place and they were so awesome!  They had a little birthday dinner for me with my favourite snacks.  They even bought me my own little tub of lactose-free ice cream for after dinner.  I felt so loved.  This birthday was a hard one for me due to personal reasons, so I really felt extra loved by all the Facebook wishes and gestures from friends and family throughout this week. 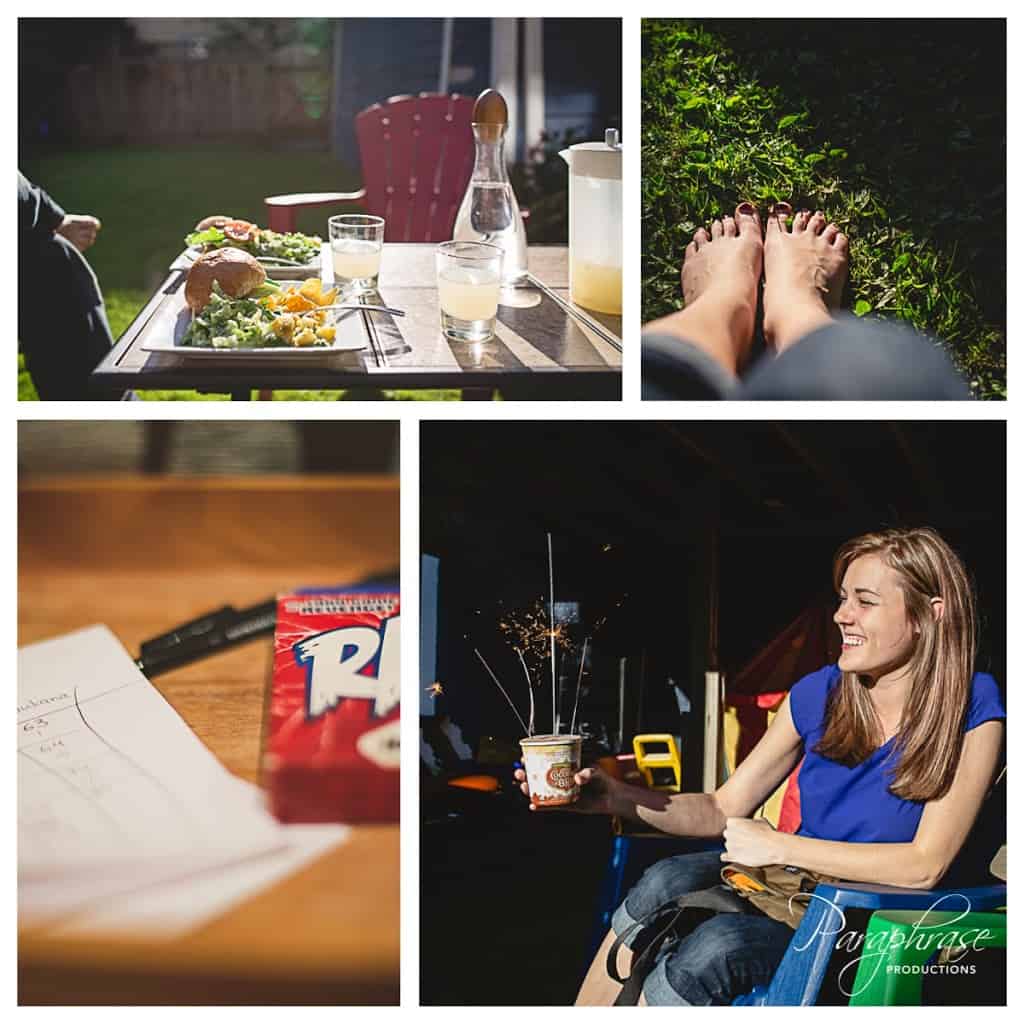 And the truly awesome part?  SPARKLERS!!  I love sparklers.  They bought an entire pack, and we ran out with our cameras into the yard later that night and had a blast.  Photos I’m in, curtesy of Nick 🙂 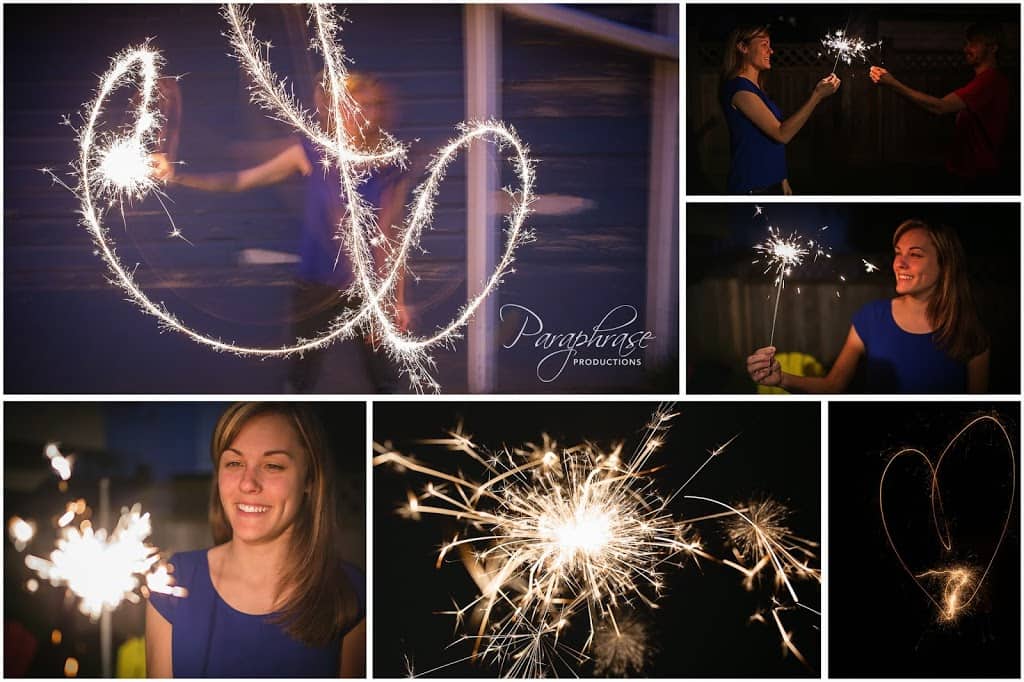 Saturday was sleep deprivation make-up day.  I slept til noon, and Nick brought me breakfast in bed.  We cuddled, watched t.v., and then I took a nap (of course!).  I woke up around 6pm (don’t judge – you have no idea how little sleep I operate on all week long), and we got ready to head out to our movie reservation.  We watched Edge of Tomorrow and shared a coke and some candy.
We saw that it was truly a gorgeous sunset as we left the theatre, but had no good view of it with all the buildings.  We chased it 20 minutes down the road to the beach, but didn’t quite catch it.  After grabbing a quick silhouette of Nick, we head off to the grocery store and had a delicious, but super late, dinner with our spoils 🙂

Sunday was errand day.  Returning some stuff at the Mall.  Costco (to finish our proper shop from the night before).  Taking our bikes to get repaired.  Being told they were beyond repair and that it would be cheaper for us to get new ones.  Going to Canadian Tire and spending $260 on new bikes (Mine was only $99!).
By 4pm, we were ready to take out our bikes and explore a local park we’ld never been to.  (We’re trying to “get out” more this year, and stop being bums all the time).  Before I got all sweaty, I asked Nick to quickly grab my “annual birthday photo”.  For my entire life, my mother took me to have my photo done ON my birthday.  Every year.  Tradition.  After I got married, I continued the tradition, but have been a little bit lax about the “on my birthday” rule.  I usually get it done within the month.  I liked the black and white one, but it was a bit soft.  Thus, here are the candidates I sent off to my parents (minus the black and white) to choose from.  They pick, I print.  I hate the process, but love the idea of watching the age progression, and we’re 29 years in, so I continue!  I spent about an hour culling out all the ones I looked truly annoyed in. 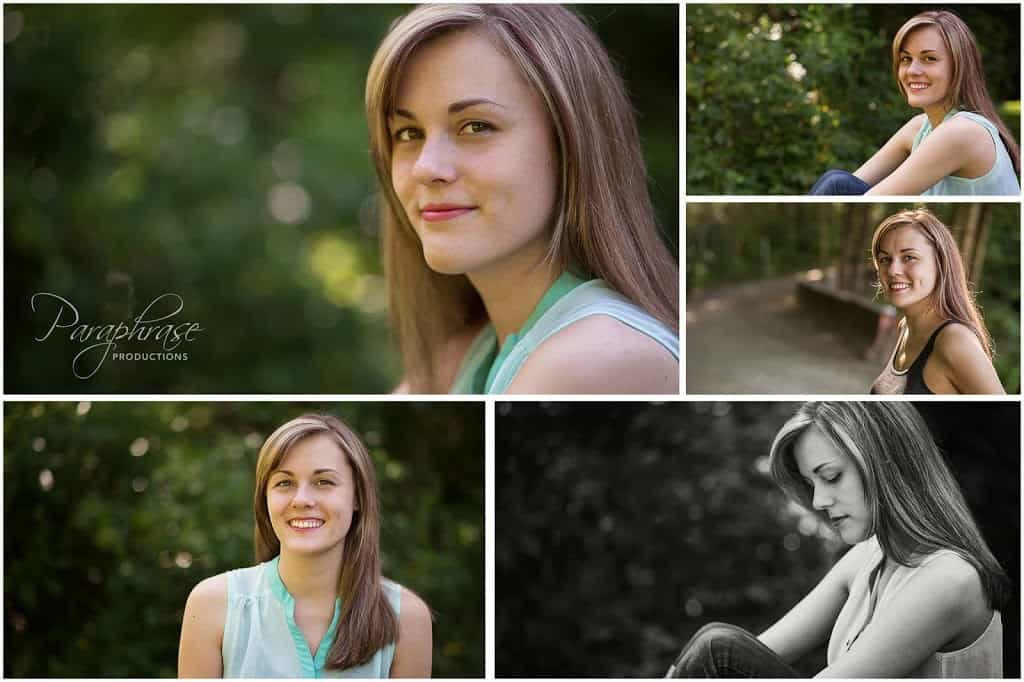 We had a great Sunday afternoon biking around and learning how out-of-shape we are!  Nick humoured me as I instructed him to step in various pockets of light to play with the rim lighting and laid in the dirt to shoot buttercups.  We chased geese around.  We realized we should have brought water bottles.  We went home and relaxed.  It was the perfect end to the last two-day weekend we’ll enjoy together until mid-October.  Wedding season begins.  Nick’s booked solid, and I suppose I can’t really point the finger just at him this year, since I seem to be getting in on the action as well now.  We’ll sleep when we’re dead, right? 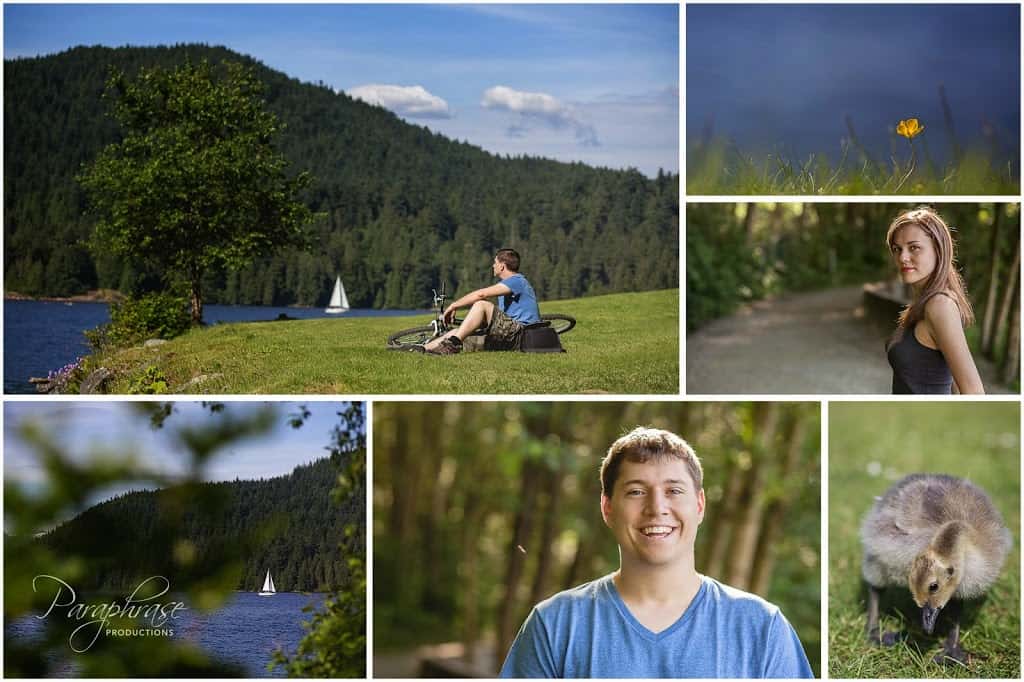