Week 4 comes to a close!  Almost one full month in 🙂

Wednesday:
Twice a month I have an extremely long day.  Every other Wednesday I alter my hours at work to 7:25-3:25pm.  This necessitates a 5:15am wake-up call.  Then, I leave work early to head out to a city where we used to live where I have 5 piano students that are all within a block or two of each other.  I manage to squeeze them all in before their bedtimes, and Nick swings by with the car to pick me up.  He drives me back to our neighbourhood in an adjacent city and usually I would have to run off immediately to Bible study from 7:30-10:00pm without stopping at home first.  Thankfully, this particular night it was “guys’ night”, so Nick dropped me off at home and headed out solo while I curled up in bed.  I grabbed this snap on our way home, at a busy intersection: 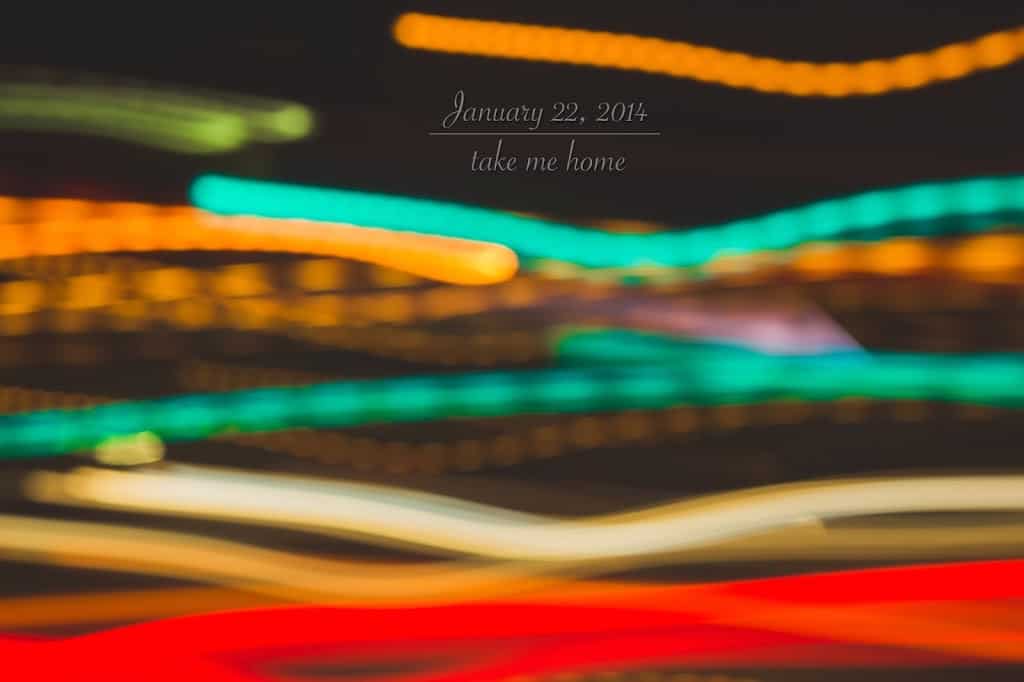 Thursday:
Thursday I was all done.  I’m truly an introvert at heart, and while I love people, they make me VERY, VERY tired.  We’ve been hanging out with lot of people lately and been involved in a lot of stuff at church (I’m working on the “N-O” word, I promise I am).  I was just needing a break.  So we crashed and had a night in.  I had only one student to teach so was done by 6:15pm.  Nick made us delicious avocado burgers and we hung out in bed together for the remainder of the evening.  So needed.  It may seem like a pretty lame “date night”, but we think it was pretty awesome.  (And to answer some questions I’ve had – the camera is on a tripod at the end of the bed, and I’m holding a remote control in my right hand). 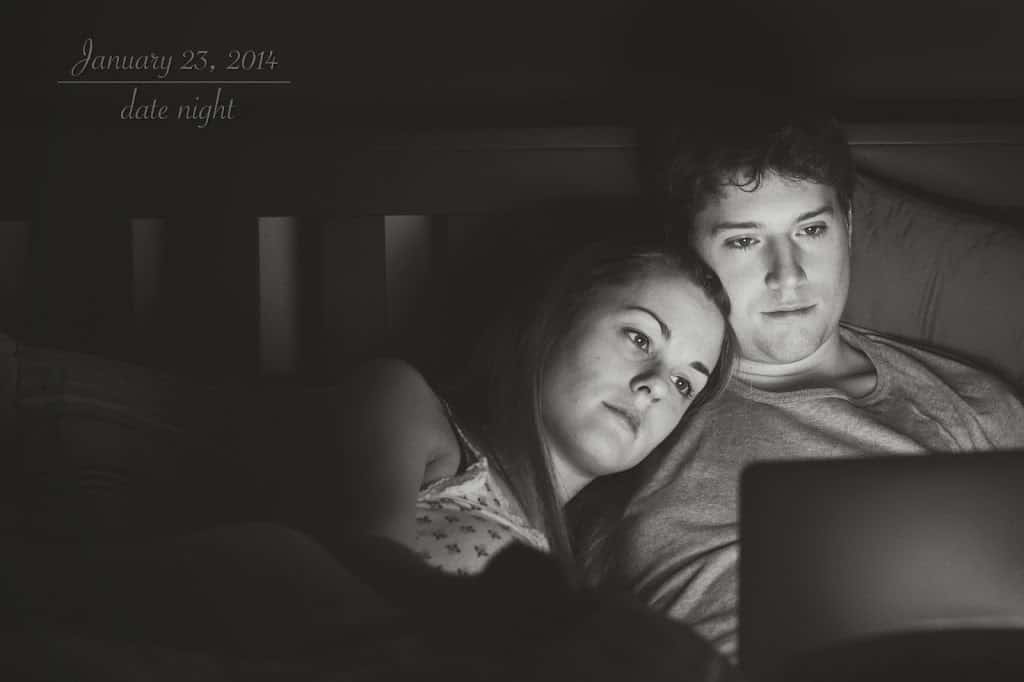 Friday:
Well, that Thursday date night meant staying up way too late, so I was pretty tired come Friday.  Nick was downtown at a film networking event, so it was just me and no students at home for the evening.  (I only teach on Fridays if I absolutely have to – i.e. a student was sick and could only move their lesson to a Friday evening).  I practiced piano for another hour or so.  I’m still learning how to look at these charts and make music that is vaguely interesting out of them!  Then I was fast asleep before the clock even struck 8pm. 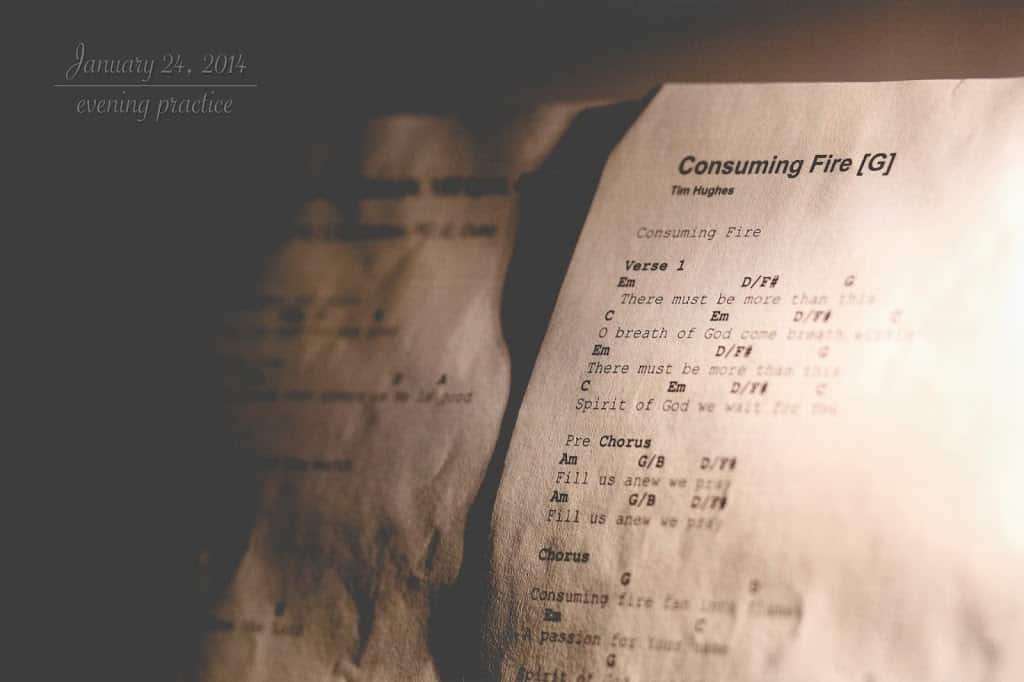 Saturday:
I thought Saturday was going to be lame, but it wasn’t.  Nick got up earlier than I did to finish editing a video.  I followed him out to the living room with my blanket and curled up in front of the fire and enjoyed the sunshine coming in through the windows until he was done.  Then we spent some time mapping out a more precise timeline for our epic road trip we’re planning for April/May of this year.  Next, we got ready, tidied up the house and bought Sir Francis Bacon, or Bacon for short.  Why name a fish “Bacon”?  Why not!  (Also, if you’re Reddit or Imgur geeks like we are, you’ll find it funny).  Next we headed off to worship practice together which was hilarious.  I don’t remember the last time I laughed as hard as I did when Nick and the worship leader switched places/instruments for an entire song and we all went along with it laughing so hard we could barely play.  Nick’s gorgeous voice made up the for fact that he doesn’t know the first thing about playing guitar.  The leader held his own surprisingly well on the drums, however! 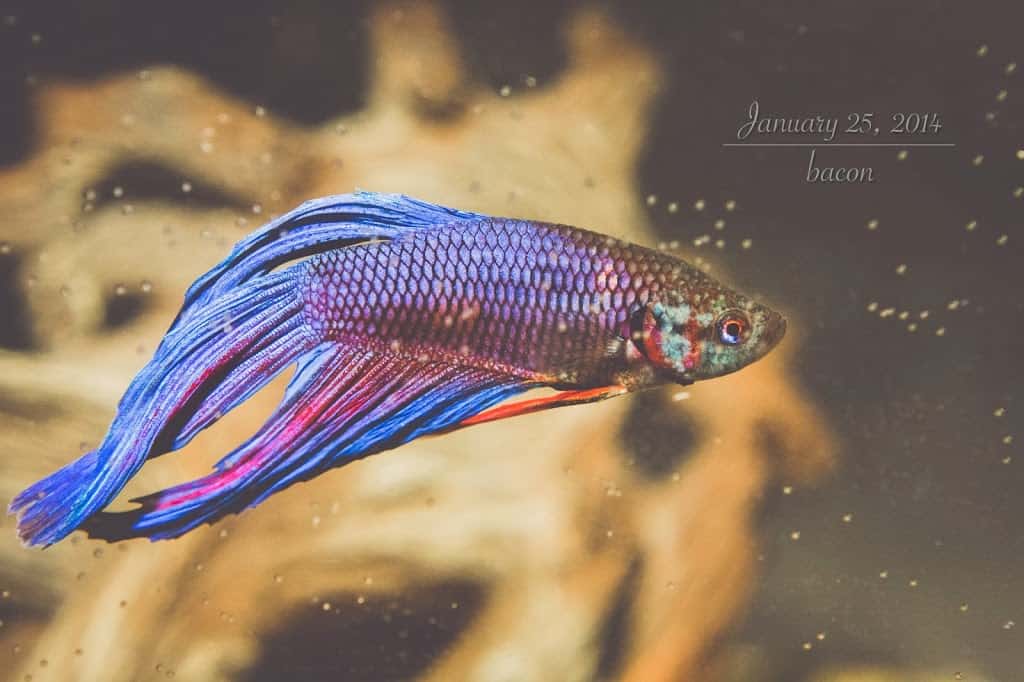 Sunday:
Why do people go to the early service at church by choice?  Ugh… let’s just say I played WAY better at the later morning service AFTER we ran for coffee in between.  It was my second time playing on the grand piano there, which is pretty scary because as I mentioned earlier in this post – there’s no notes.  On the keyboard I can “hide”.  I can turn on a nice synth sound and play some chunky harmonies if I blank out.  On the grand piano?  There’s very little place to “hide”.  You need to keep playing SOMETHING at all times, even if you’re not sure what.  It was pretty awesome, though, because I found out a friend of mine (who was singing on the team) had her grade 6 piano.  During set up the previous day, I hauled her over for a “how to play off a chord chart” lesson.  She picked it up in pretty much 3 minutes flat, so I volunteered her loudly for singing AND playing the keyboard that weekend. That spared me from being bored to tears playing pads, and also forced me to get over my fear and stay on the grand piano the entire time, removing my keyboard retreat as an option.  We were both pretty happy with the arrangement as we both survived and had each other’s backs if one of us lost our place. And now the team has another keyboardist, which is great because we were running short 🙂 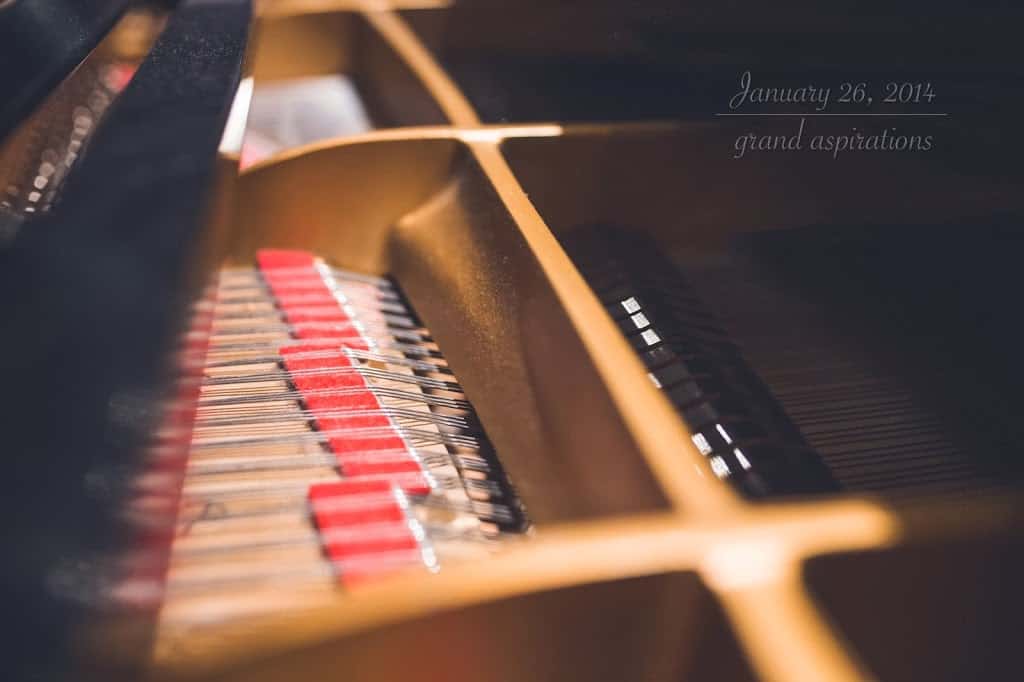 Monday:
Back at the office and back traipsing to and from the hospital.  Every time I come out of the “dungeon”, which is what I call our training rooms because they’re in the basement with no windows, I’m never quite sure what awaits me outside.  Our weather here has ADD and changes on a whim.  I was pleasantly surprised by what I opened the doors to on this afternoon after previously entering into the abyss from layers of fog and grey: 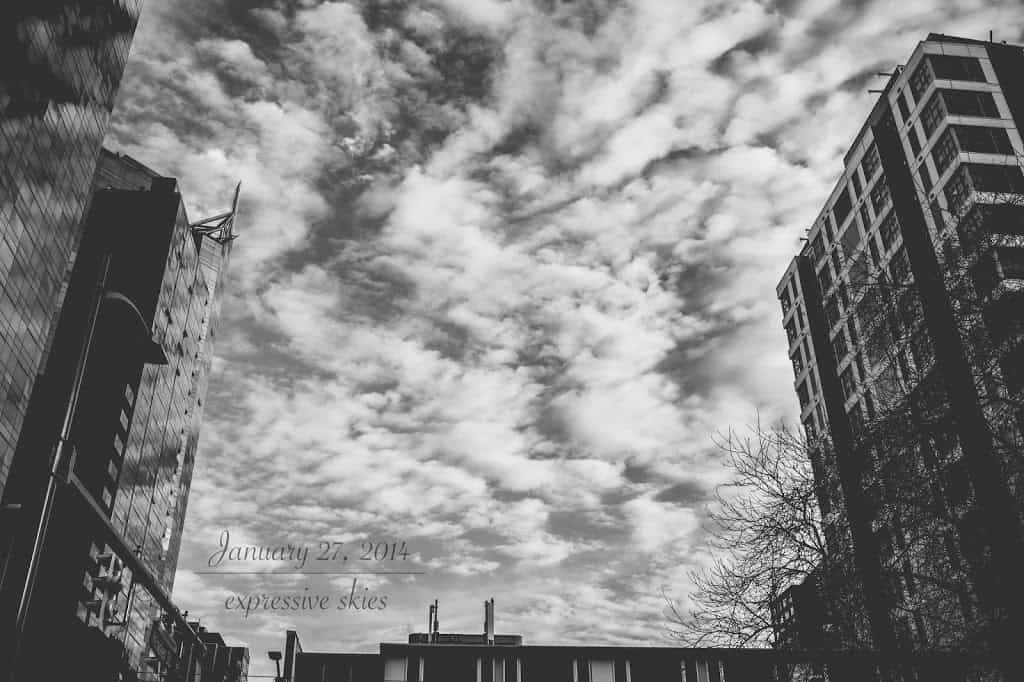 Tuesday:
Today was a relaxing day at the office with an unexpected lunch date with my best girlfriend, Tara. The walk to meet her for coffee was less than stellar compared to yesterday.  Everyone thinks it’s wonderful that the grass is green here year round and that we have hardly any snow.  What they don’t realize is that, in exchange, we are covered in a winter blanket of untextured grey skies more months than not.  The day was brightened, however, by receiving a phone call and subsequently a new piano student starting next week :). 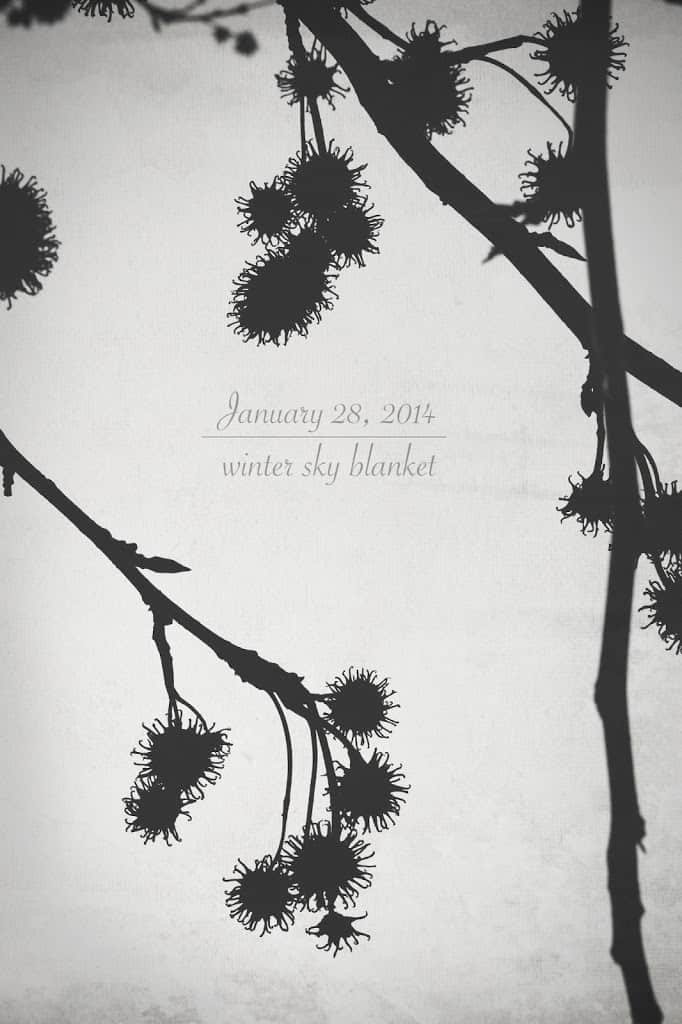 I admit I’m feeling a bit uninspired with photo taking lately.  But really – did I think I could power through over 350 photos with enthusiasm and constant creativity?  But I’m still staying true to my plan of capturing life and every photo I take has a story, reminds me of a day, or expresses a season, and that’s what matters 🙂