Wednesday, November 26th, was guys’ night at Lifegroup, so I stayed home after teaching and had the house to myself.  I spent the few hours Nick was gone editing and polishing up a portfolio for submission.  I took a quick break to grab a photo, but the vast majority of my evening was spent staring at a screen until far too late. 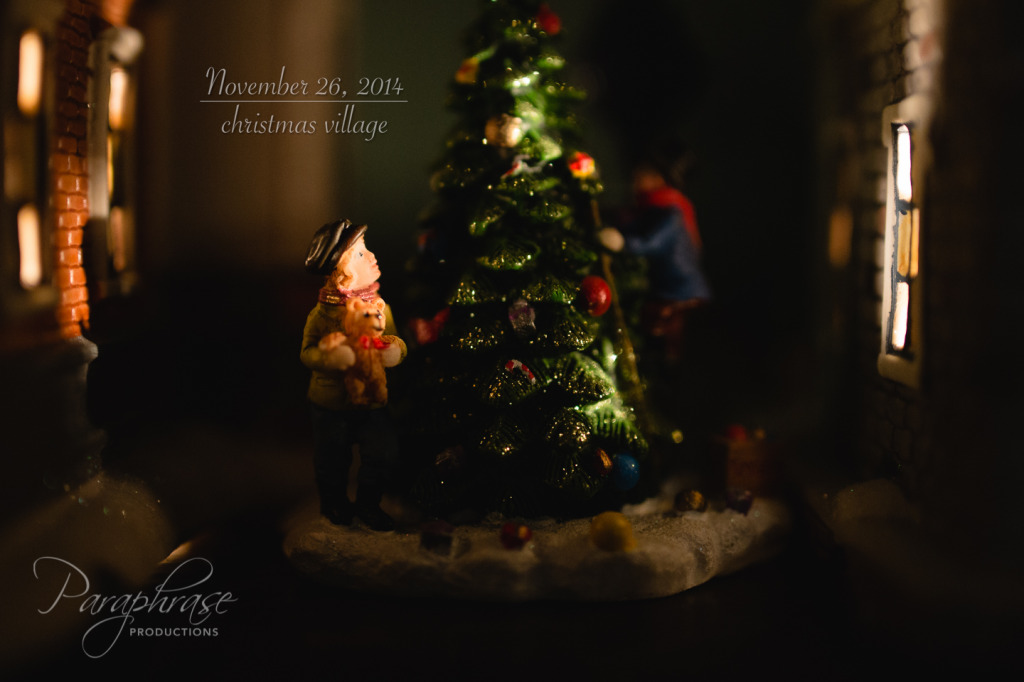 Thursday, was actually fairly identical to Wednesday:  work, teach, portfolio prep, stay up too late, repeat!  Albeit, it’s easier when you have someone working right along side you 🙂 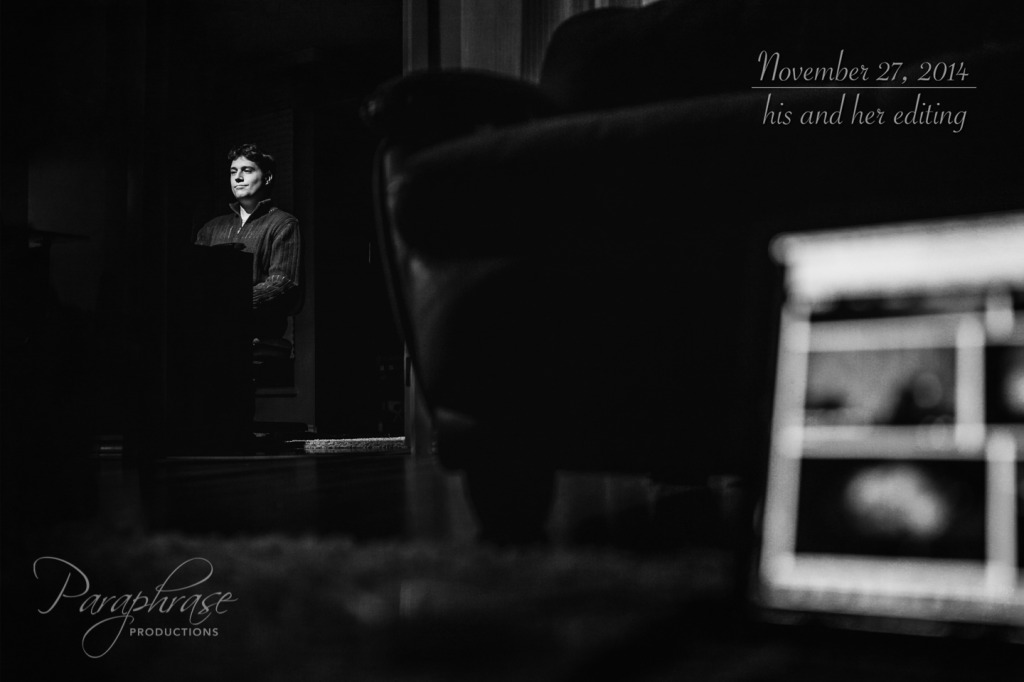 Friday night was Nick’s work Christmas party.  We had a gift exchange and a potluck dinner, and I had brought my camera along because I knew the party was near the dock and would make for a decent photo.  What I didn’t expect was for it to go all-out Christmas on us and snow!!!  We almost never get snow here – maybe 3-4 days a year tops, so to have it show up in November was a real treat! 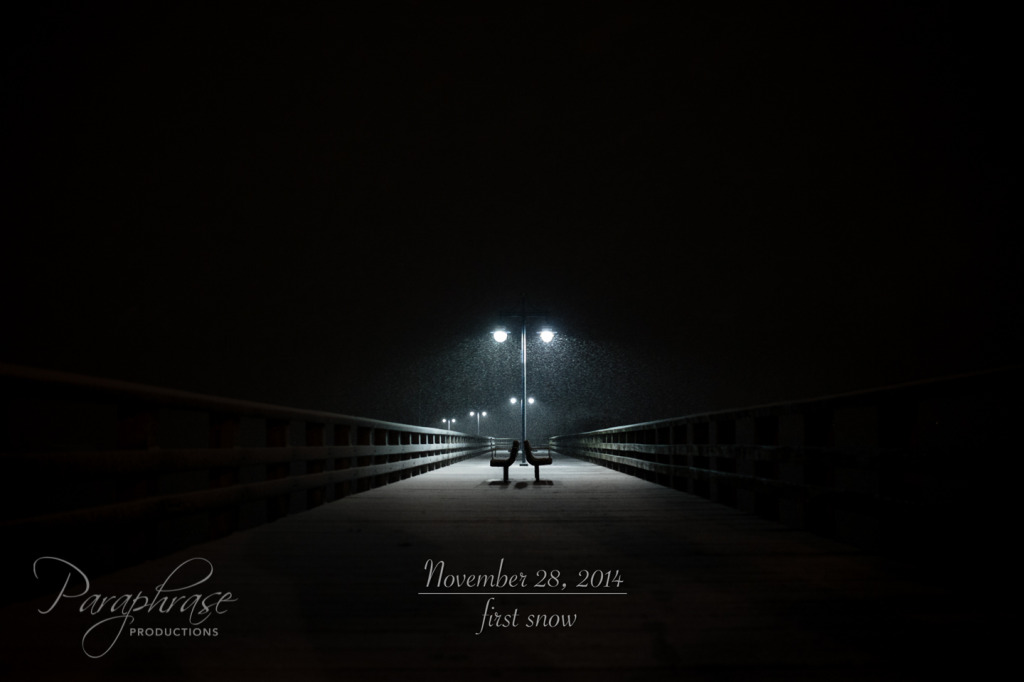 Saturday, I shot my last wedding of the season and it was probably one of my two favourite weddings to shoot all year.  It was intimate and beautiful.  There was snow everywhere and the couple was pretty much game for anything.  They were also super obviously in love, and were so sweet to capture.  (I plan to finish up editing it soon and will write a blog post.)  After the wedding was over, I drove to pick up Nick who was out with friends all day and we came home to relax together. 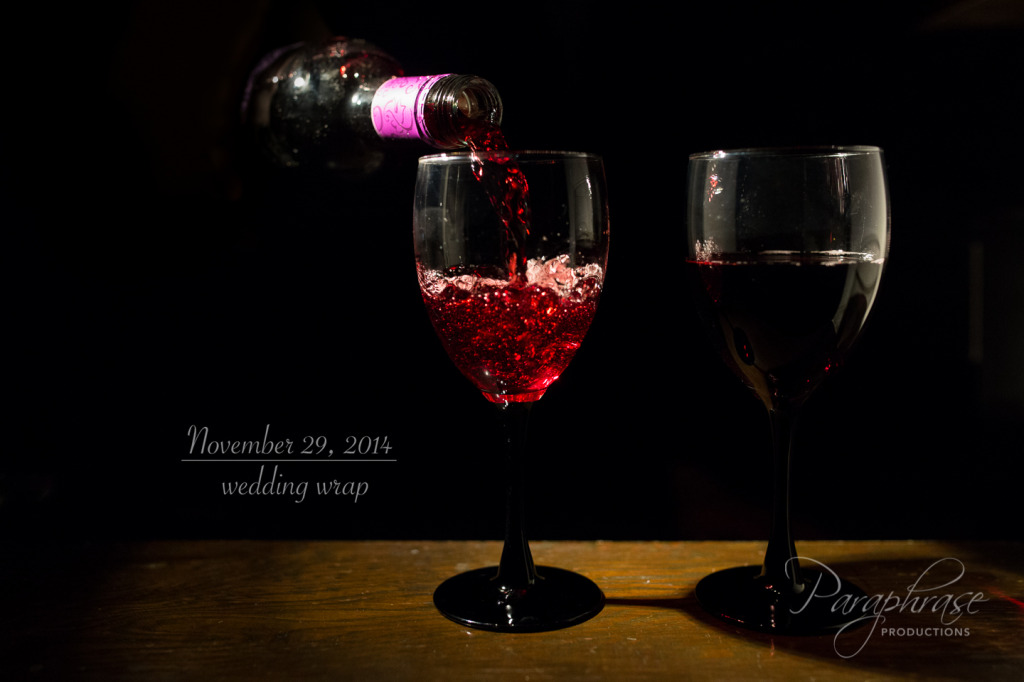 Sunday, the fact that I was shooting outside the previous day with no gloves and boots that were NOT waterproof caught up to me and I stayed in bed all day fighting a cold.  I did manage to spend at least a few hours culling down all the photos from Saturday and putting together the beginning of a gallery for the couple, though, so the day wasn’t a complete write-off.  I love this photo SO much because it is 100% us all the time.  Whether we’re working or relaxing, this is pretty much our standard position. 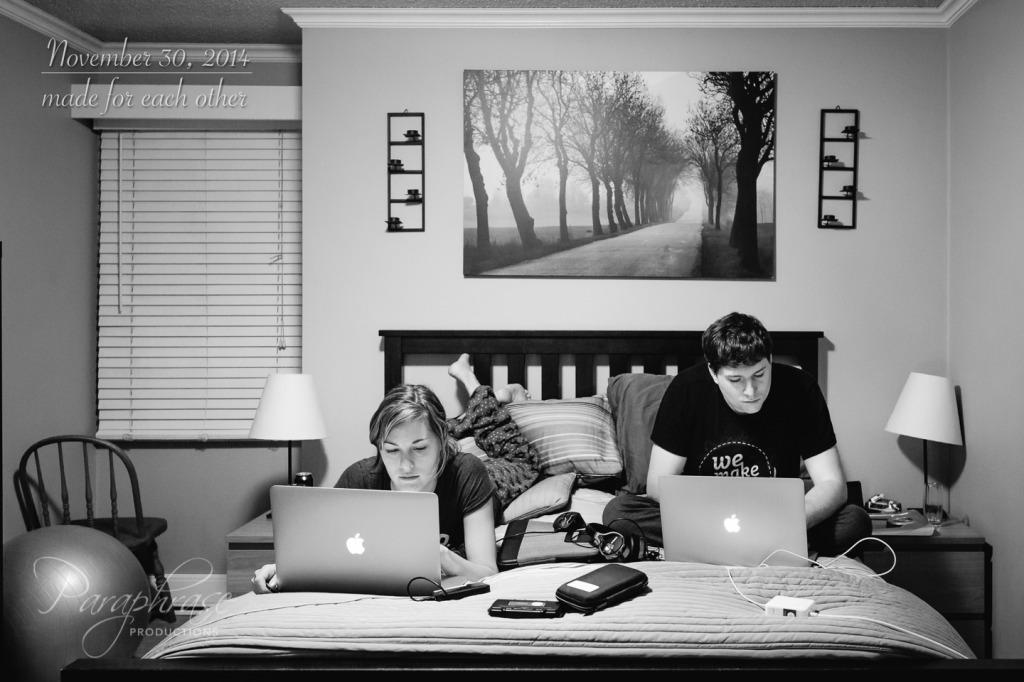 Monday, was again the usual work, teach, and edit routine (surprise!).  I split my time between editing the wedding and still finishing up my portfolio for submission.  Now that it’s colder, warm baths have also been factored into the daily routine, but the computer always comes with! 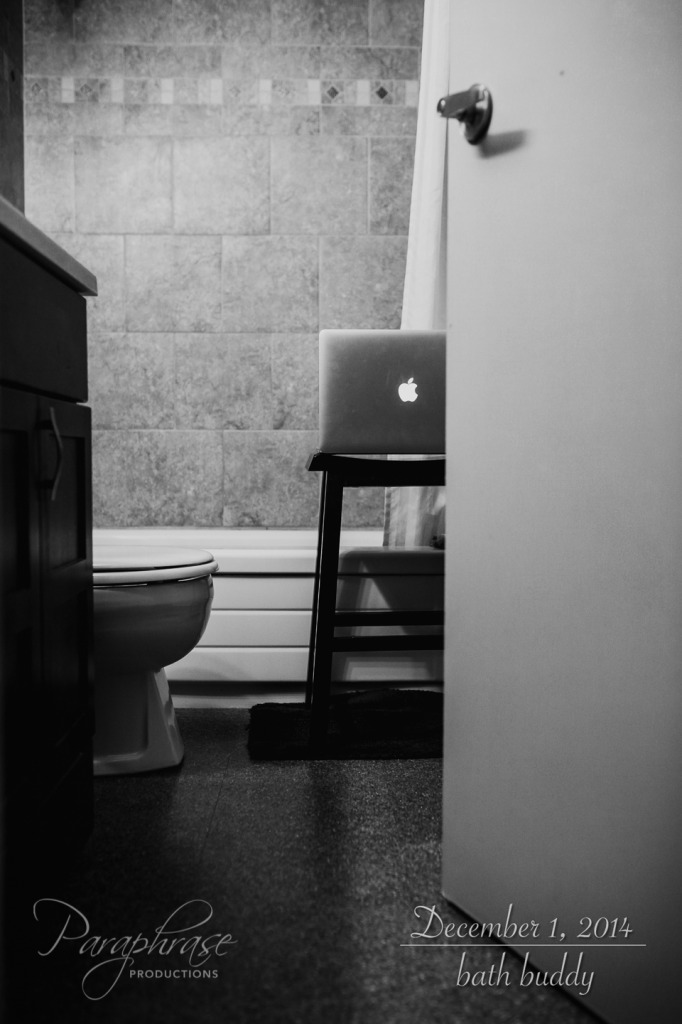 Tuesday, it was my turn to bring goodies to Life Group the next day, and in our grocery-buying fast I had discovered two boxes of cake mix in the pantry.  The first batch went in with the full intent to take them out 18-21 minutes later as per the instructions on the box.  I jumped up from my editing about 45 minutes later and flew into the kitchen with an, “Oh no, the cupcakes!!”.  Thankfully, it was a big mix and the second time around I actually set a timer ;).  Tonight, though, I did finally managed to finish my portfolio and submit it, and now I begin the two-week wait to see what my scores are.  You can see my submission set here. 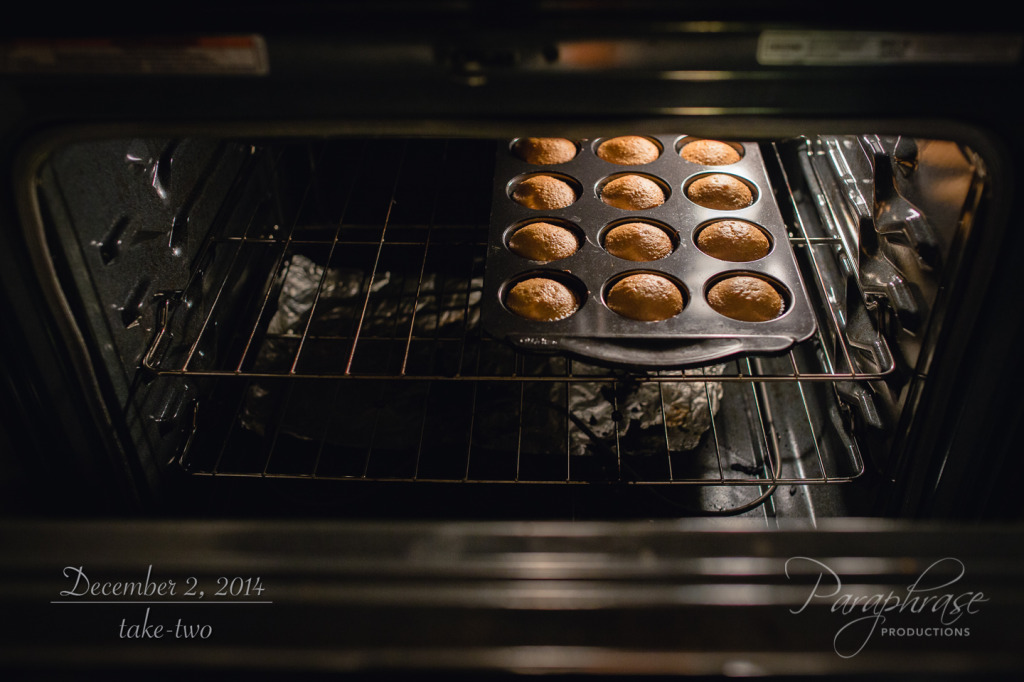 Wednesday, I handed the car off to Nick just after 10pm when I got home from Life Group so he could run and pick up some eggs from friends of ours that bring them in bulk from a local farm.  (Someone forgot to get them earlier….).  I tidied up the kitchen and grabbed a quick picture when he got home. 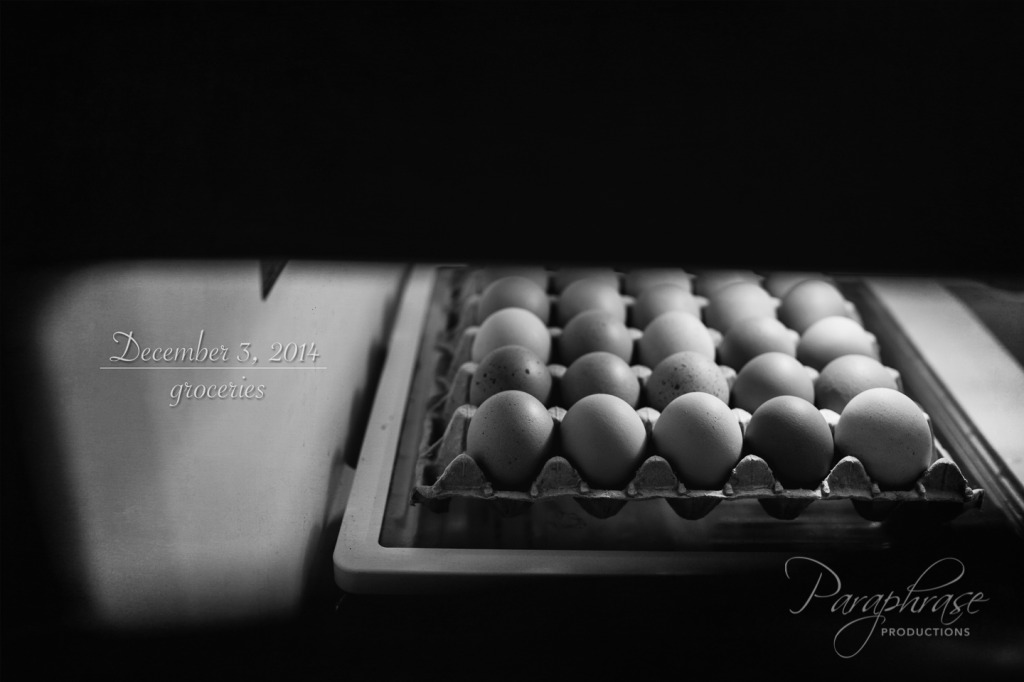 Thursday, I stayed home from work as the cold I was battling from the weekend decided to try and return.  I got up around 4:30pm and made some chicken wings.  I think Nick was a little appalled that I would eat them for “breakfast”, but they are my favourite food!  Later that night, closer to our actual dinner time, we made some smoothies, though, so that’s at least a little healthier! 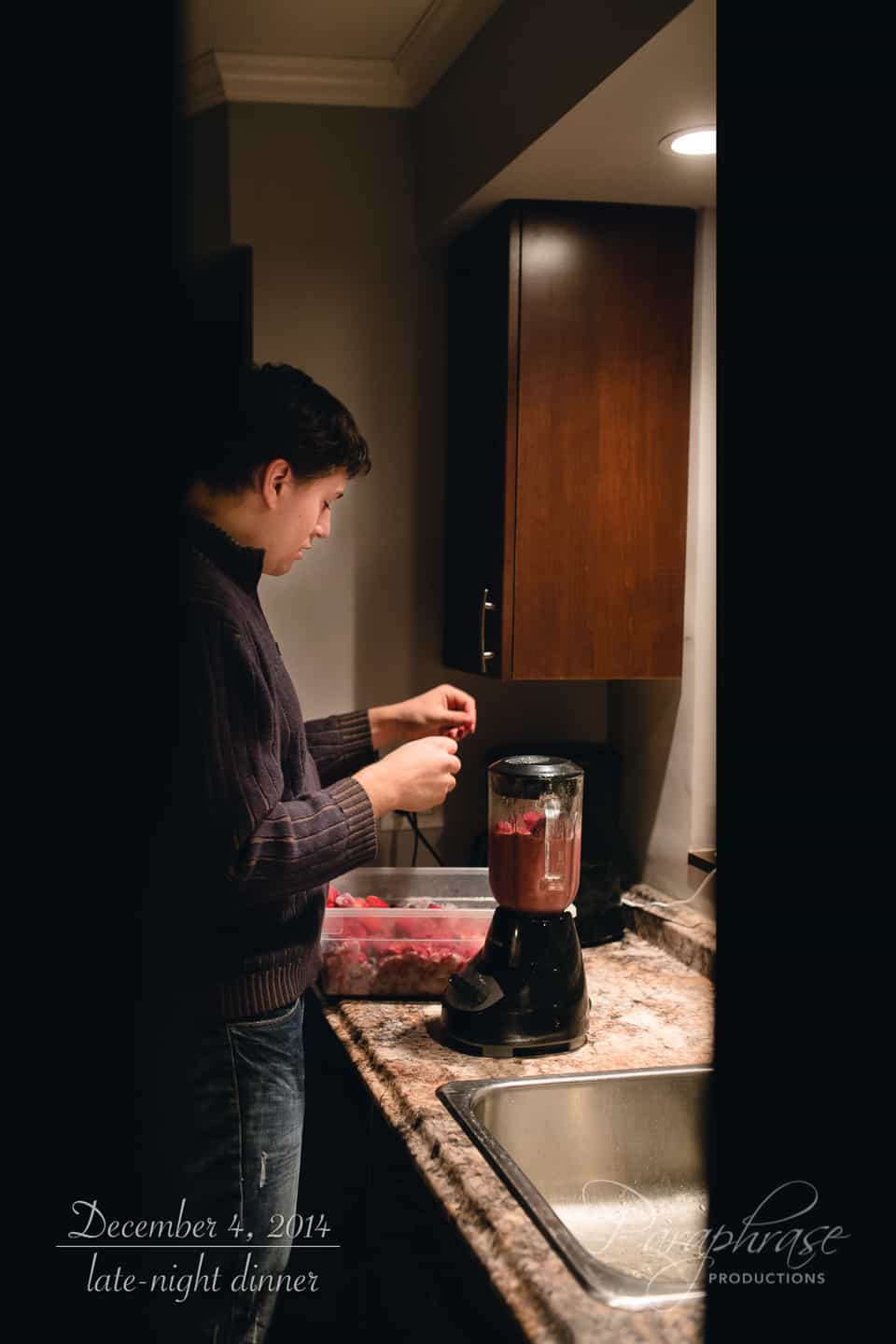 Friday, I pulled Nick’s arm convincing him that he should drive me all the way to work because it would be fun and we could stop at Timmies for breakfast along the way.  (Yes, that’s an hour drive each way for him and he works 10 minutes from our house in the opposite direction).  But he was awesome and took me!  I grabbed my camera in case there was something interesting to photograph, but I forgot it was pitch black out all the way in.  However, when I got to work I was greeted by my coworker’s way of showing love – they decorated my cubicle as obnoxiously as possible in my absence, haha!  Perfect photo op!  It was also a coworker’s birthday so they brought in all sorts of goodies, and our boss was on holidays.  Pretty much a recipe for an awesome Friday at the office.  Though, mid-afternoon, I got a text from a student confirming what time I would be at their house tonight, which reminded me I was about to completely forget that I had to teach today.  I thought I had the night off piano for most of the day!  (When students move lessons, I get confused).  So I suppose I’m teaching this evening, then commuting home as Nick will be out with friends.  But then it’s just me, Netflix, and a wedding to finish for the rest of the night! 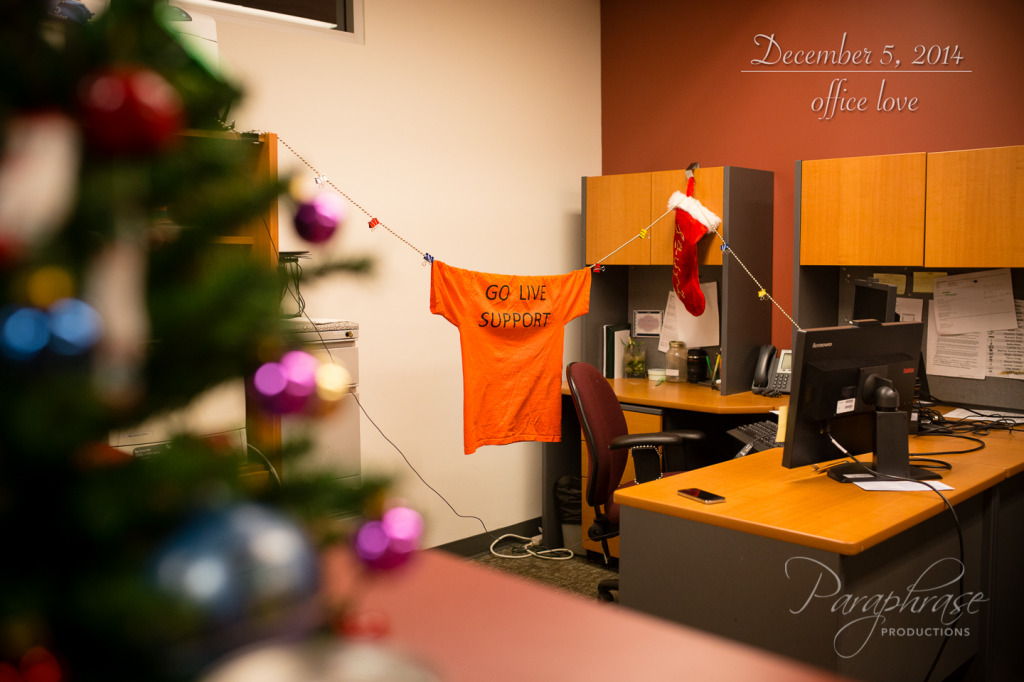