A couple weekends ago, Nick and I photographed Priscilla and Bertrand’s gorgeous Fall wedding.  After a necessary caffeine fuel-up at Tim Horton’s, I dropped Nick off in Richmond to hang out with the guys, while I headed back into Vancouver to be with the bride’s family.  Honestly, any wedding is usually a joyful occasion, but weddings where Jesus is so clearly the centre of the relationship are even more special for us.  From father and son starting the day together in prayer, to the vows exchanged, to the speeches given that evening, it was clear that Jesus was a treasured part of this day as well. 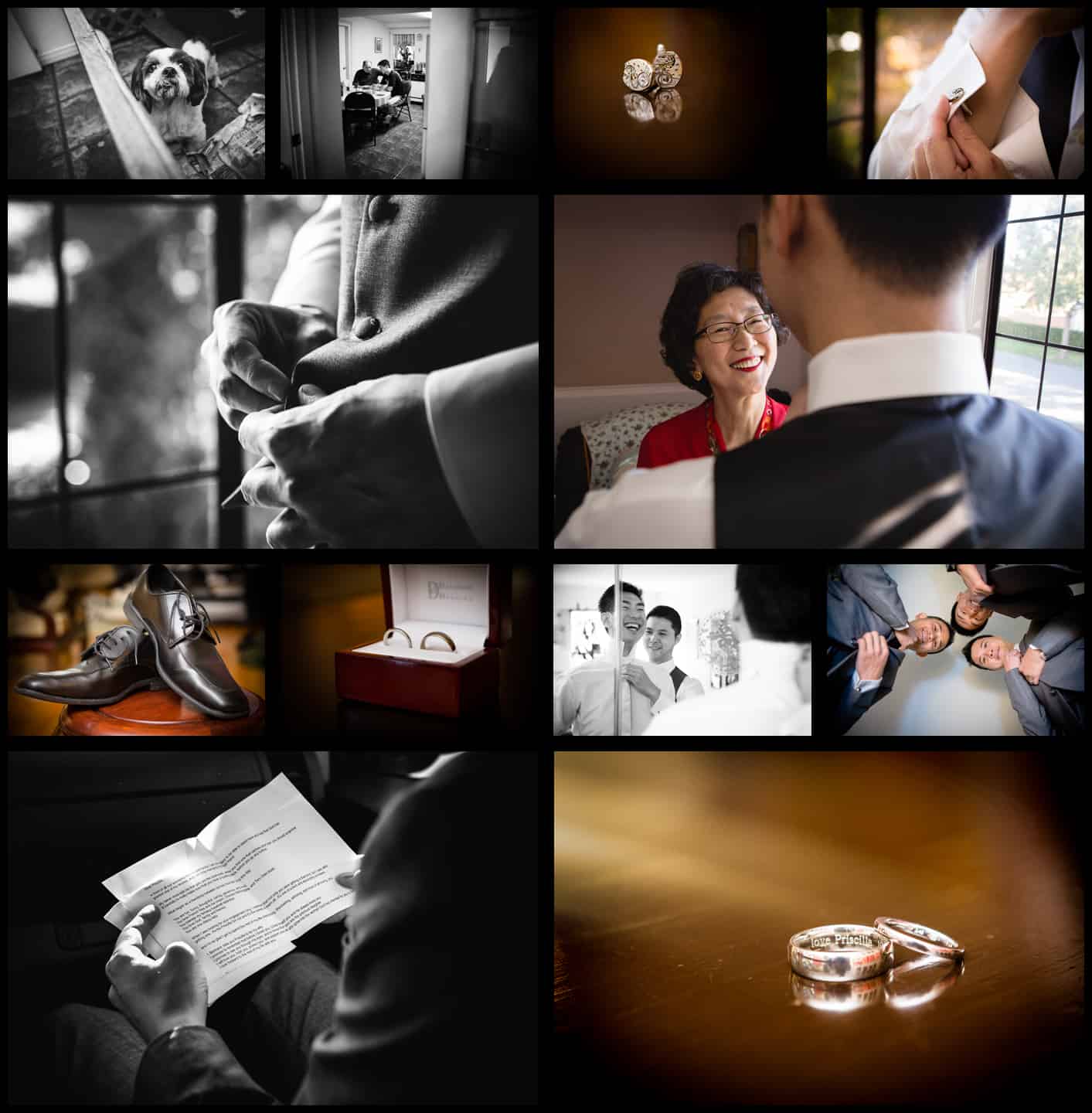 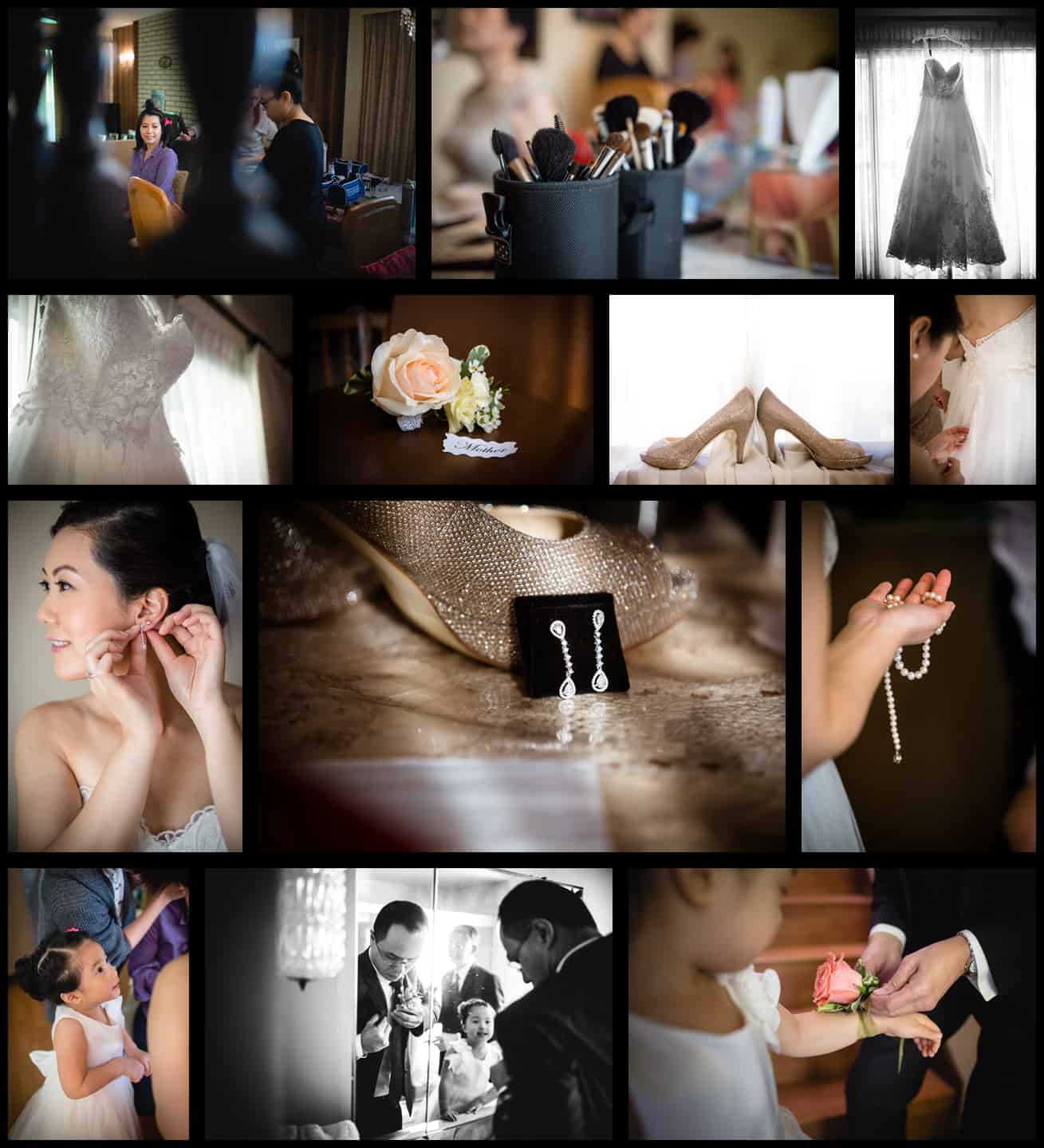 A couple hours later, we met up at the ceremony location where guest were just starting to arrive.  During the ceremony, Nick took over half of the lead shooting for me so I could start working on their Same Day Edit slideshow from the corner.  Sometimes ceremonies are the more “relaxing” part of the day for photographers, but between editing the morning’s shots, and staying half crouched with a camera on each hip for when something happened, it definitely added some variety to it for me!

Afterwards, we headed over to a special place with the bridal party for lunch – McDonald’s!  I love, love, loved the variety in locations this couple had for their mid-day shoot.  We started in the restaurant, where Nick was surprised to learn just how aggressive I can be to get “the shot”.  I may have taken over the entire front counter and asked at least a dozen or more guests to back up to the door while the staff stared at me blankly.  My theory?  If you’re quick enough, people will be too stunned to say no to your inconvenient idea for a shot ;).  Besides, I can’t go through my entire life holding the 9-year-old’s high honour of being the “Loudest Brownie” and not using that volume to my advantage sometimes!

Next, we headed over to Steveston (which is “Storybrooke” in the current “Once Upon a Time” t.v. series), where we did some park and ocean shots, and also squeezed in some time for ice-cream. 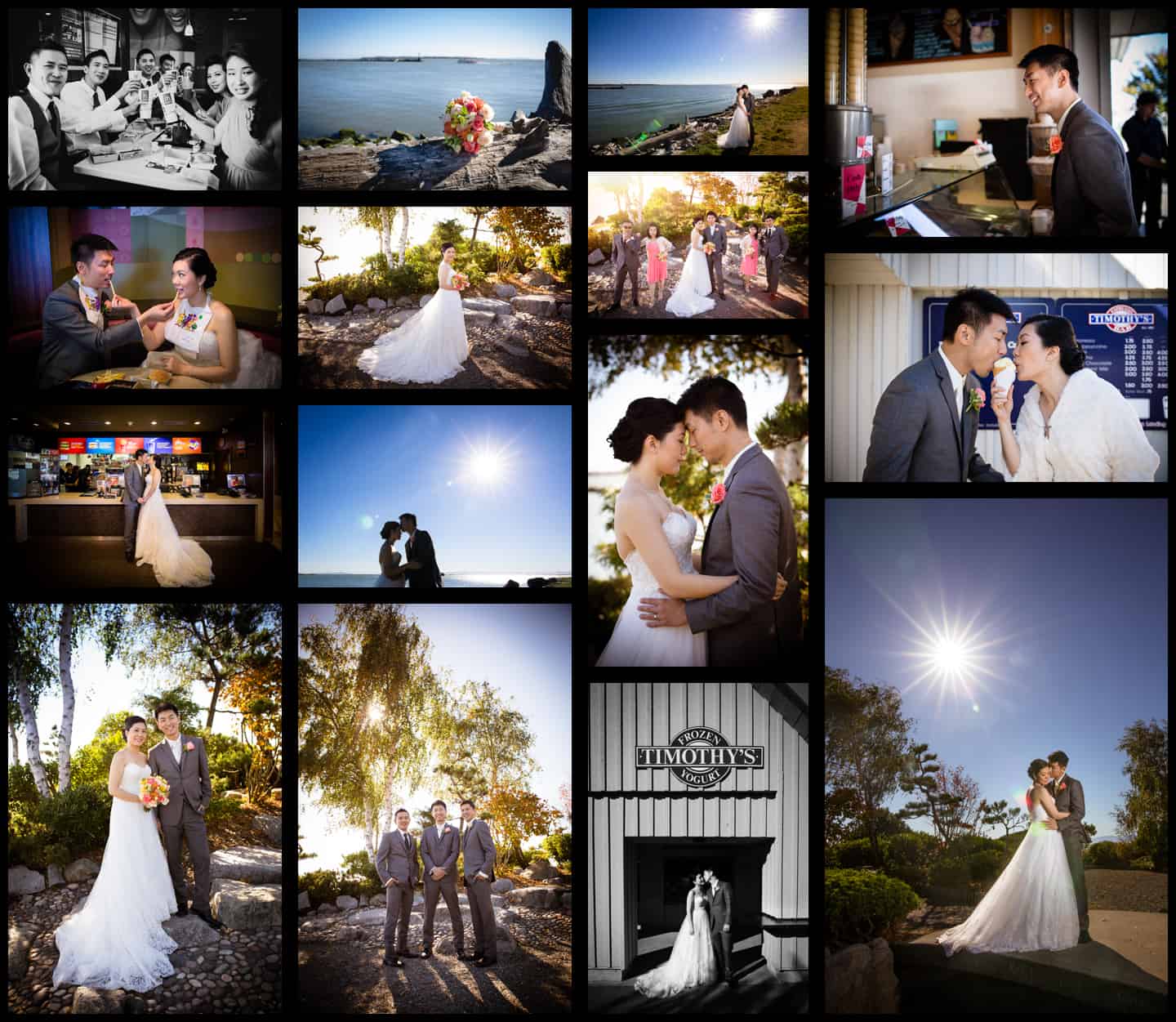 Their final mid-day shoot location was reserved for later that night, so after finishing our ice-cream, we headed over to the reception location.  Nick set off to capture details and establishing shots for me, while I hunkered down in a corner to edit up the photos we had just taken.  As family started to arrive, we captured their tea ceremony, and then got set up for documenting a night of friends, family, and fun.  We even managed to include some of the reception into their slideshow, which was played after dinner that evening. 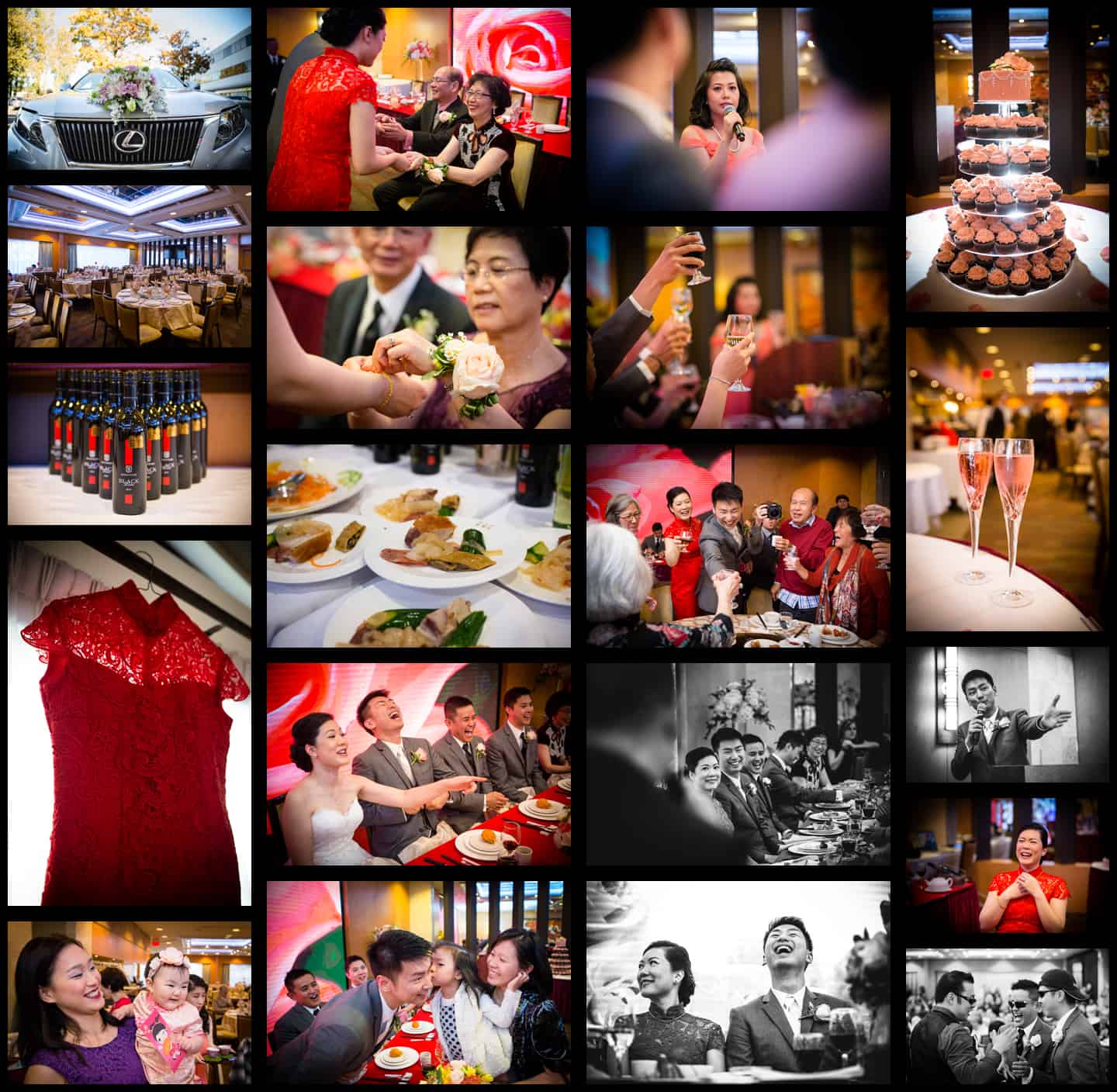 Usually, we leave after the speeches and dancing is over, and let the guests party on into the night with the couple.  However, this couple had a much more fun idea (from a photographer’s perspective anyway!).  We stayed around for the evening and then headed out with them, after the last guest had gone, to their final “mid-day” shoot location – a movie theatre about 20 minutes away.  You know I’m a sucker for some fun night shots so, in my mind, this was the perfect way to wrap up the evening! 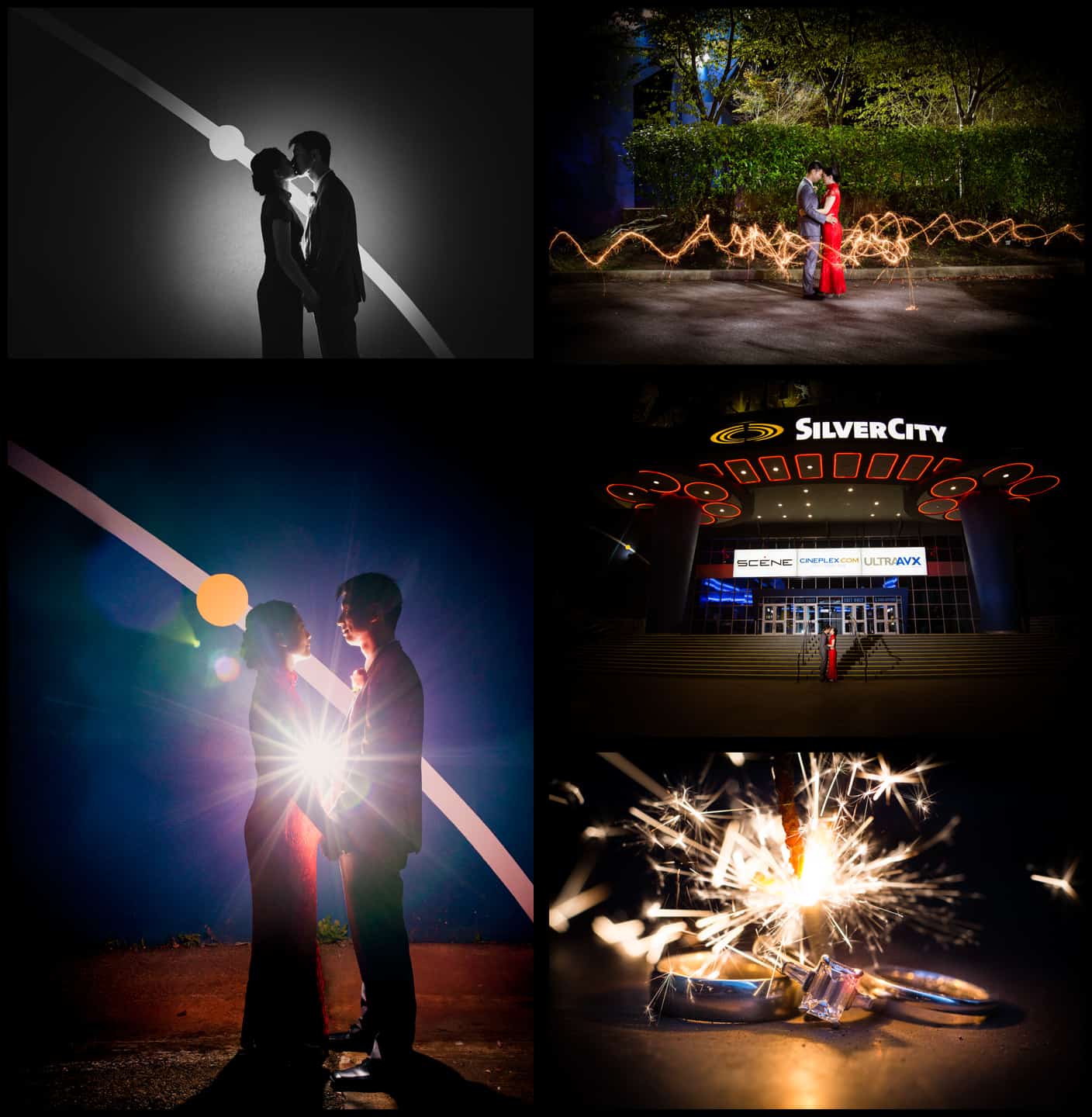