This morning we tried to get up at 8:30am, but due to the frequent sleep interruptions by the passing trains throughout the night, it was more like 9:30am.  We showered up at the camp bathrooms, and I set about making bacon and eggs for breakfast while Nick took down the tent and packed the car.  This was surprisingly difficult due to the wind whipping off the river and blowing the camp stove flame every direction except straight up at the frying pan.  We made a barricade out of all of our boxes and eventually got it all cooked!
We were on the road shortly after 11:00am.  We left our little canyon that we had camped in for the night and headed up into the mountains.  We realized that this was where we were originally planning to camp the previous night (but pulled off earlier due to being a bit behind schedule).  As we looked at all the snow and frozen rivers, we decided we were sure glad we had camped where we did!  It was actually our warmest night where I slept just in pajama pants and a tank top vs. the socks, pj pants, tank top, sweater, hoodie, and toque I had been sleeping in previous nights. 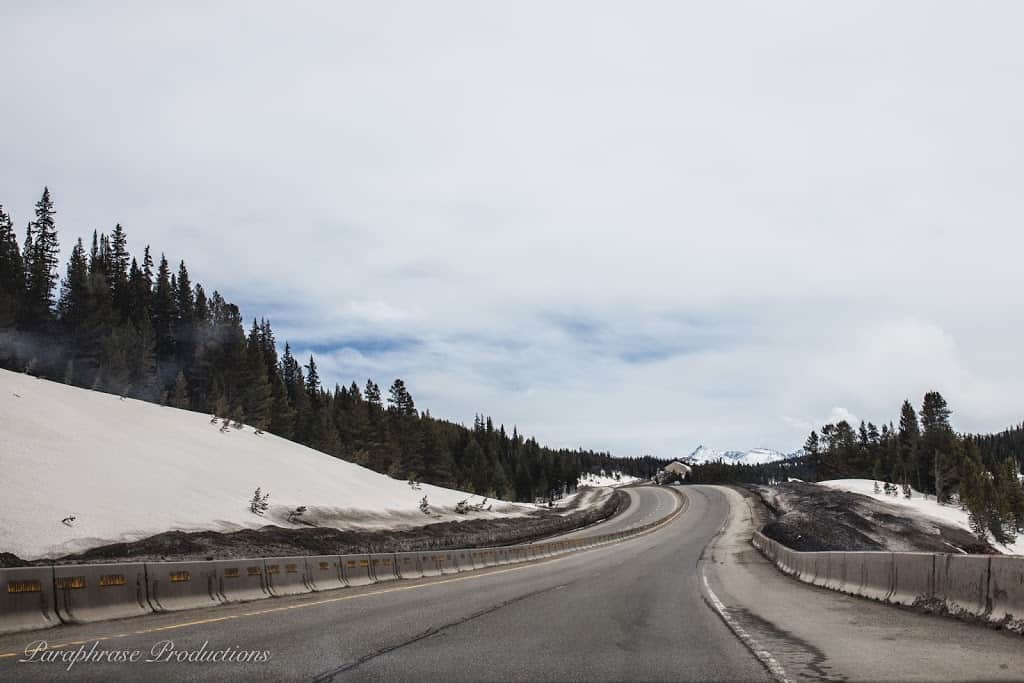 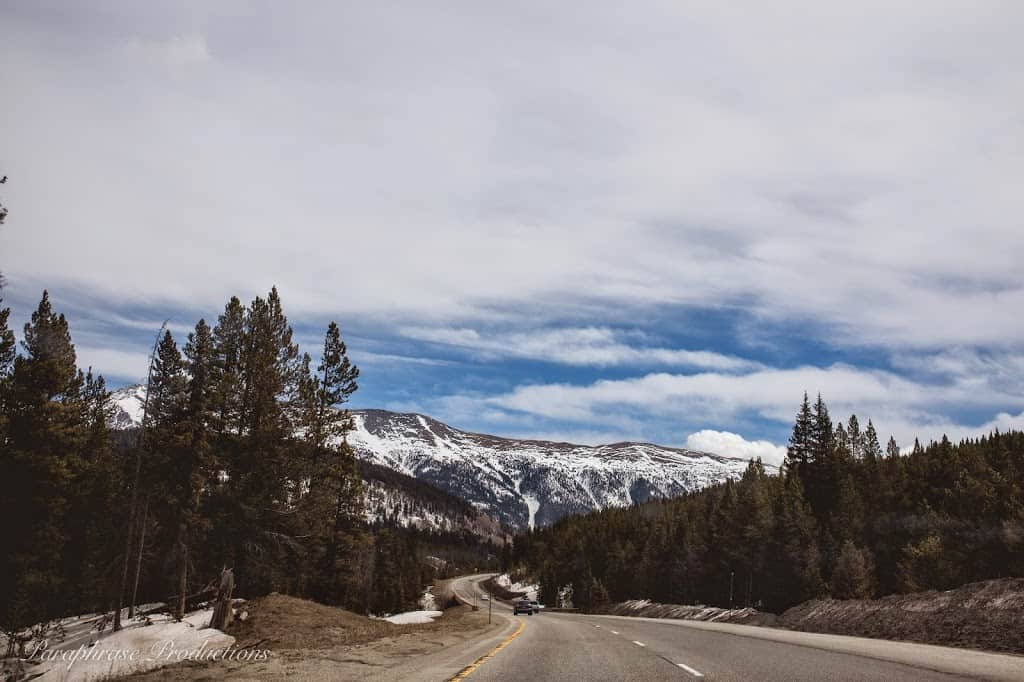 Shortly after lunch we arrived in Denver Colorado.  We pulled into the first McDonalds we saw where I managed to upload photos and do some blogging and Nick called around trying to find a campsite for tonight that was still open.  Thankfully we found one and told them we would be there around 7:30 this evening.  It took FOR.EVER. for my photos to upload on the free wifi, so we ended up not leaving the restaurant until over an hour after we had arrived.  Nick drove all afternoon, and quickly made up for the lost time – not before we made a couple quick sandwiches and grabbed a couple sodas out of the cooler in the back of our car, though.  This is what the space near my feet looks like by about half way through our day. 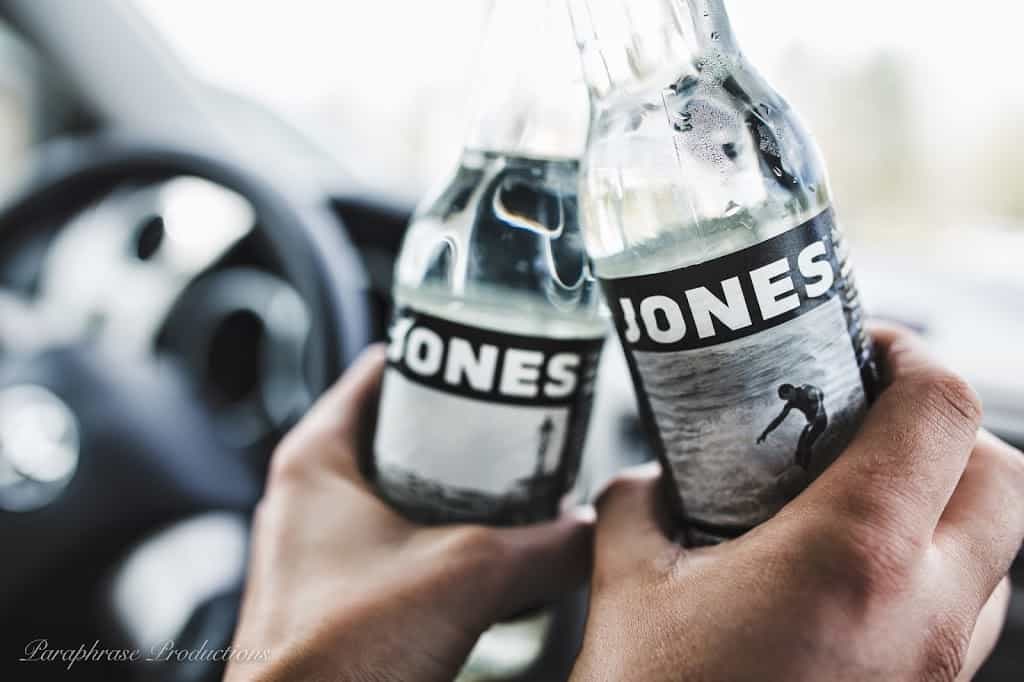 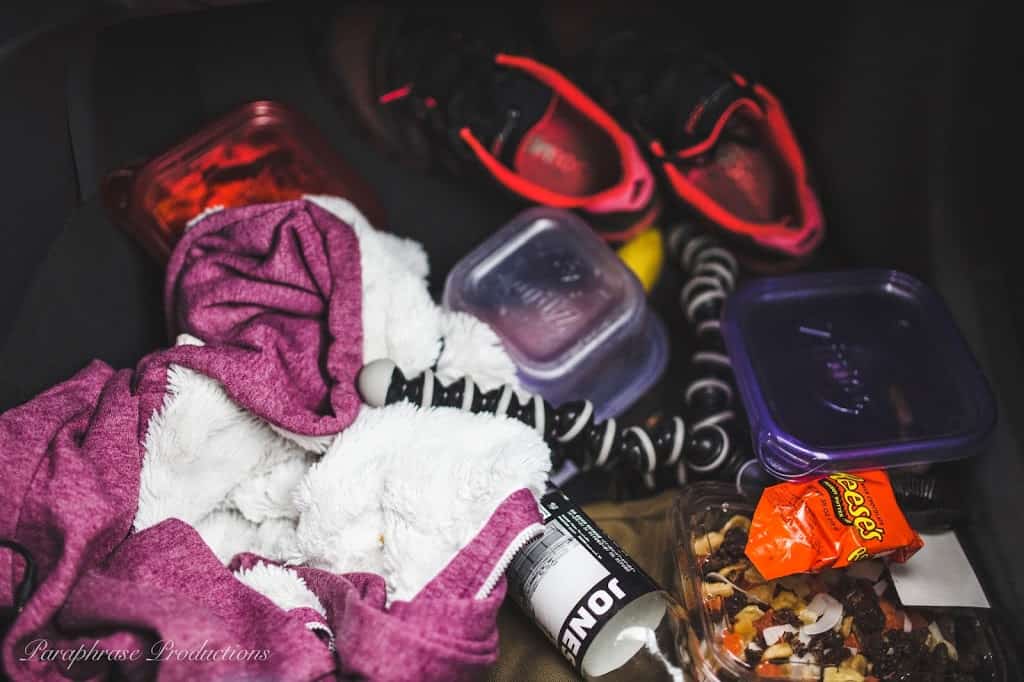 The drive started off slightly overcast as we left Denver, but the sky gradually got more and more ominous. 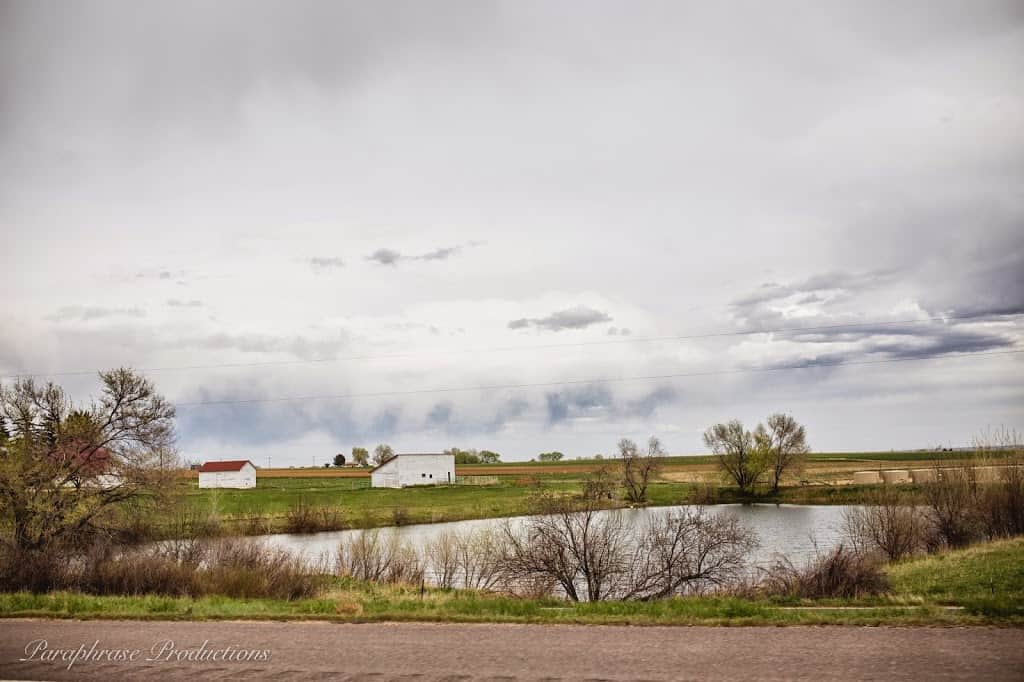 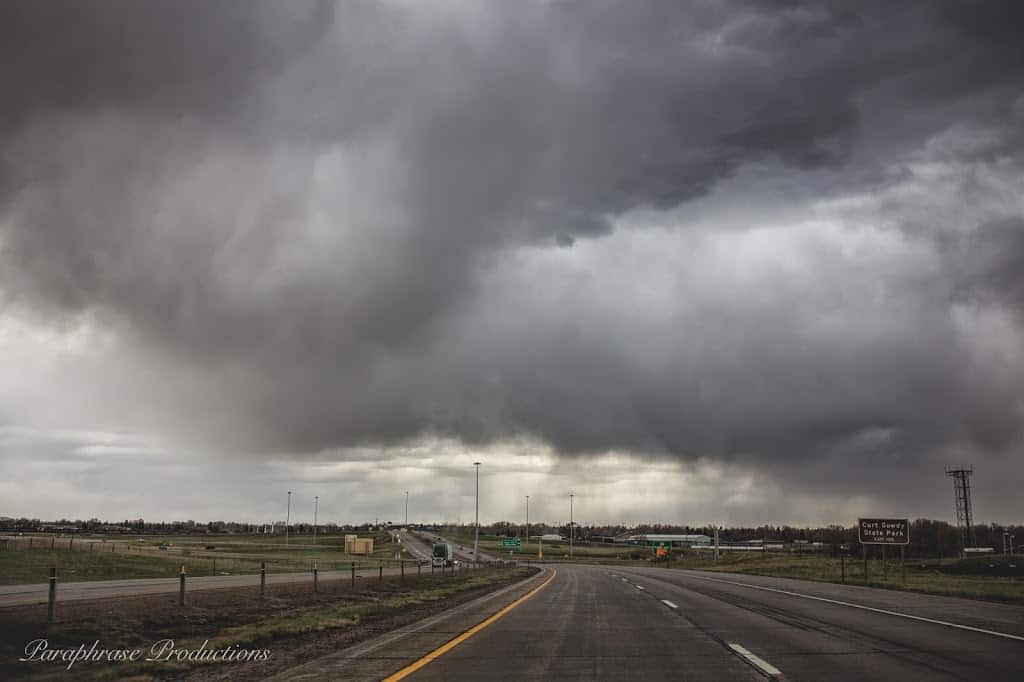 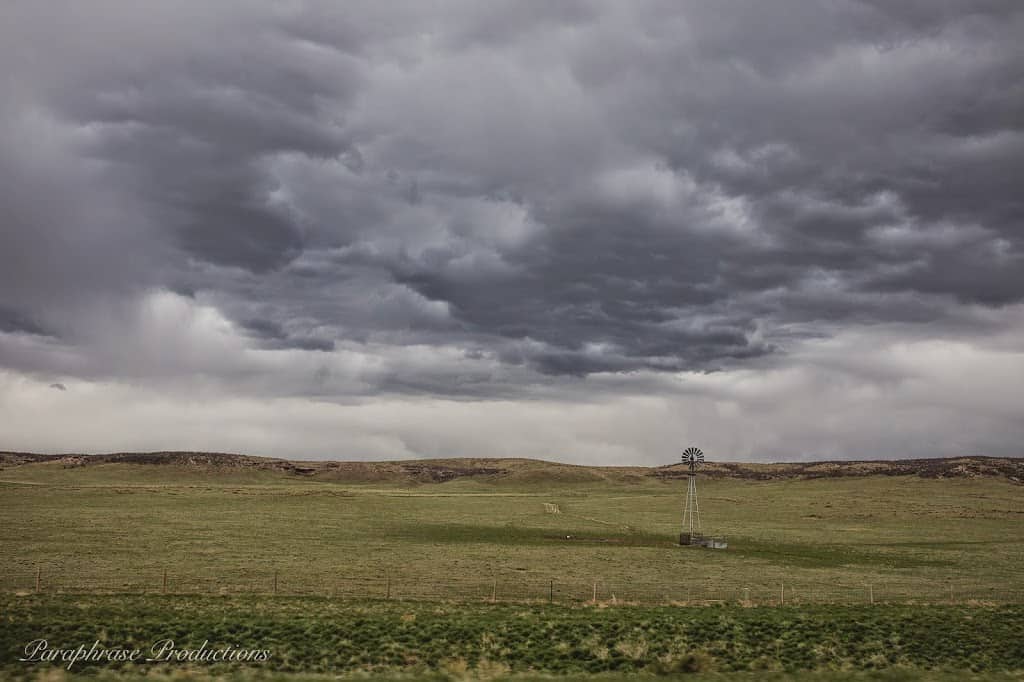 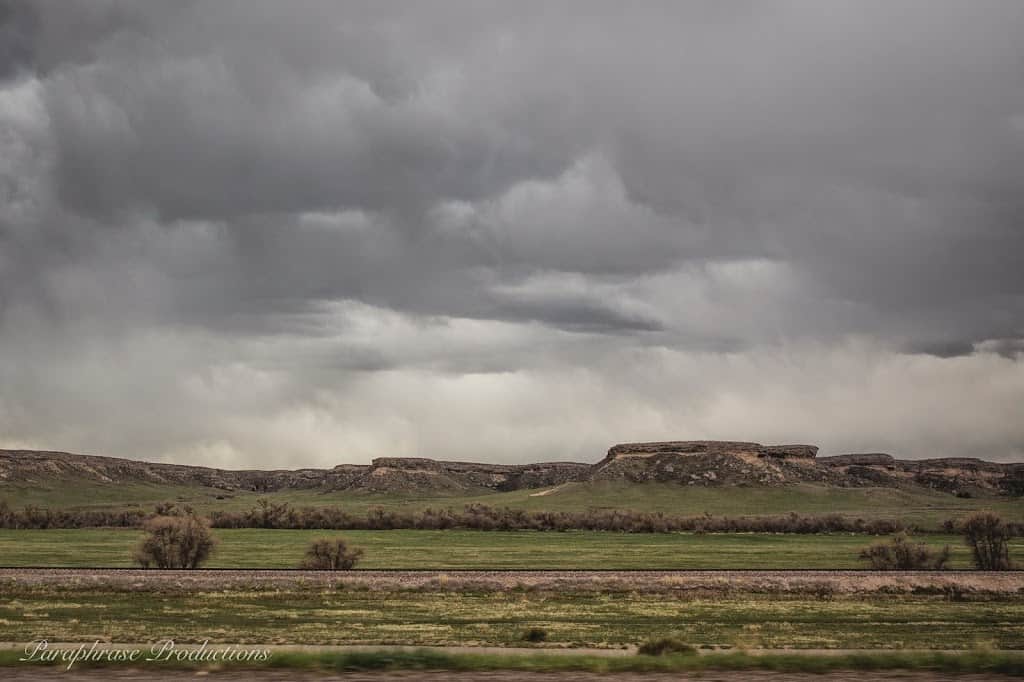 The sun came back just in time to make a pretty sunset as we neared our campground, and I felt relieved to know we wouldn’t be camping in the rain. 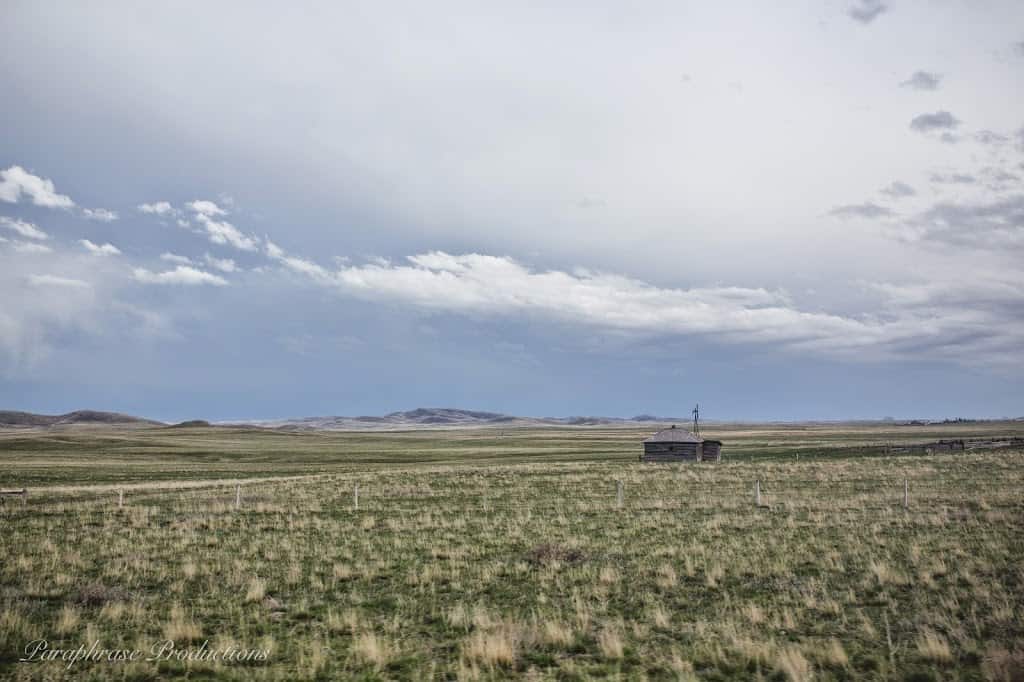 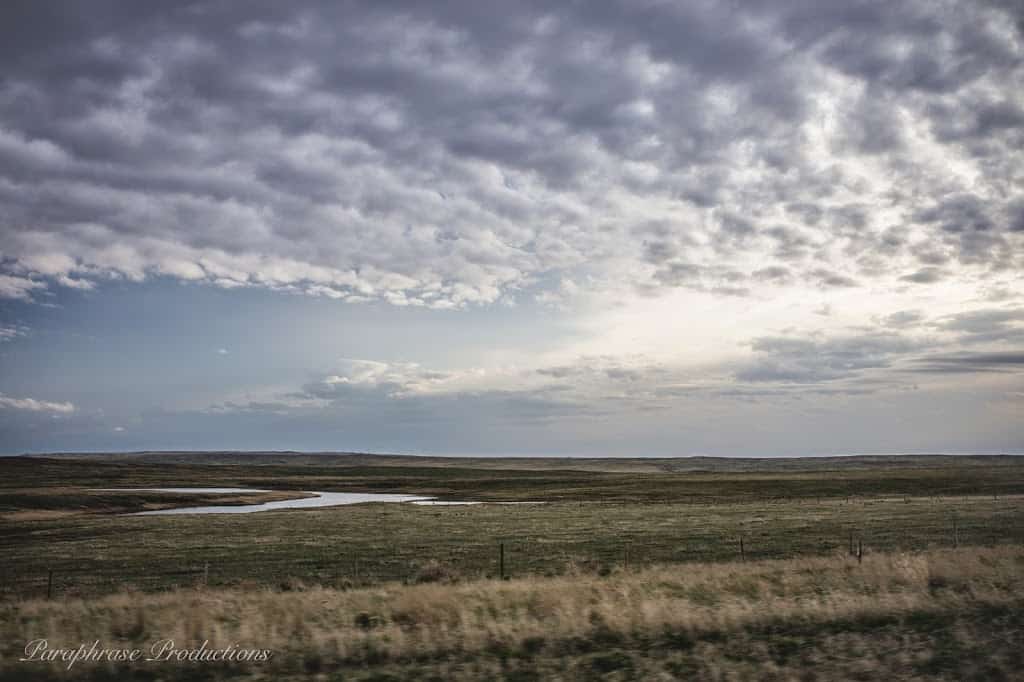 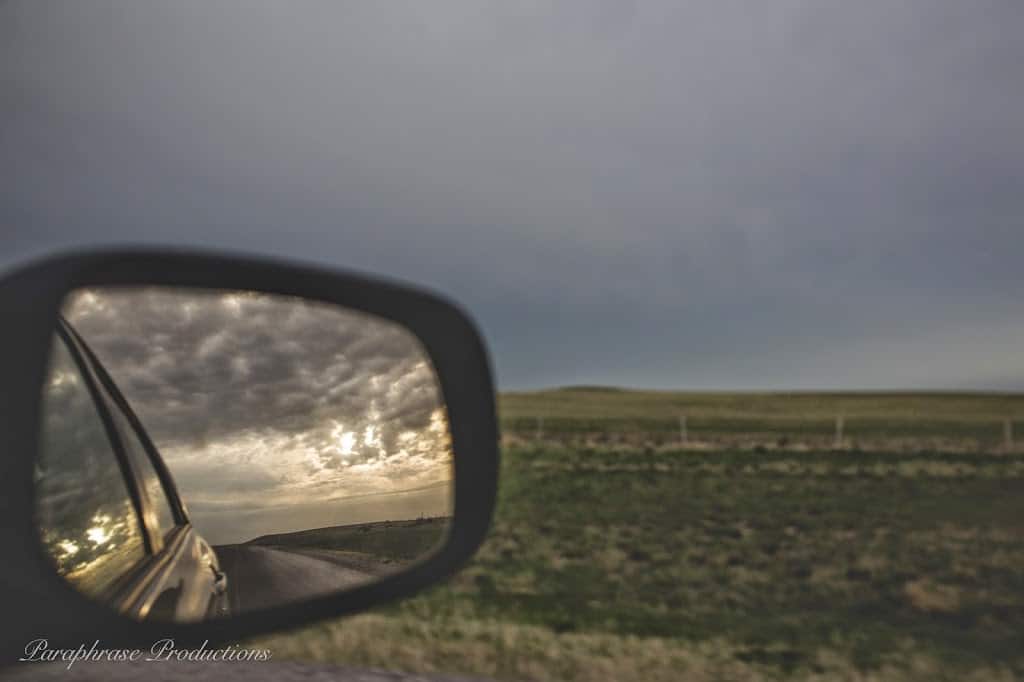 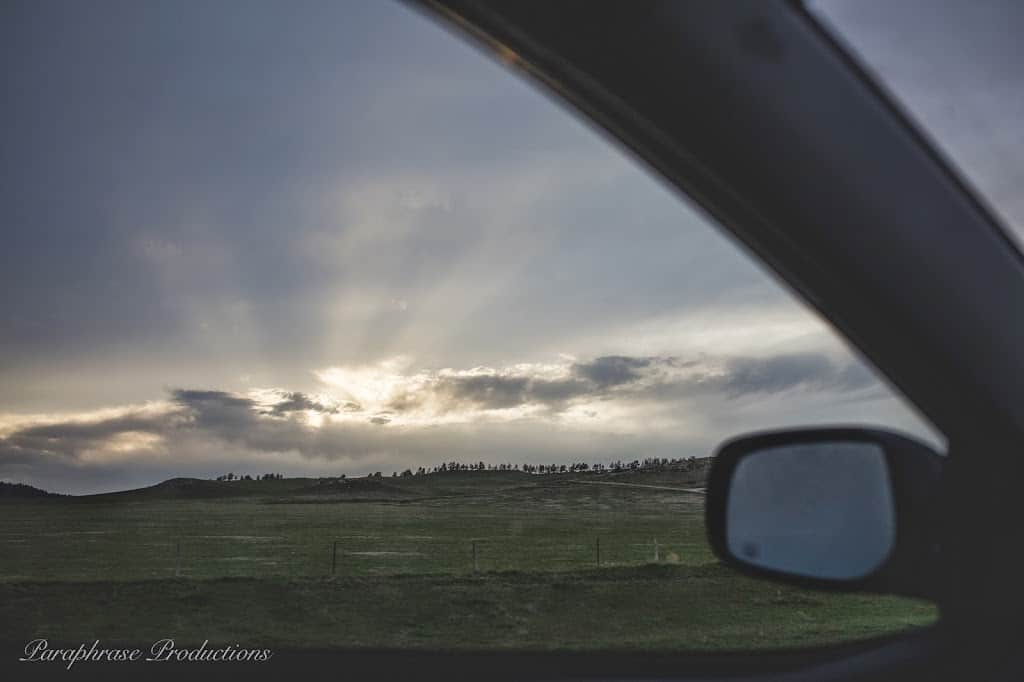 We pulled in just before 8:00pm and thankfully they were still expecting us.  Most campgrounds in this area of South Dakota don’t open until “Summer season” which is still about 3 weeks away.  I don’t have a picture of our exact little plot of land as it was too dark by the time we paid and bought our fire wood, but here’s the little camp office. 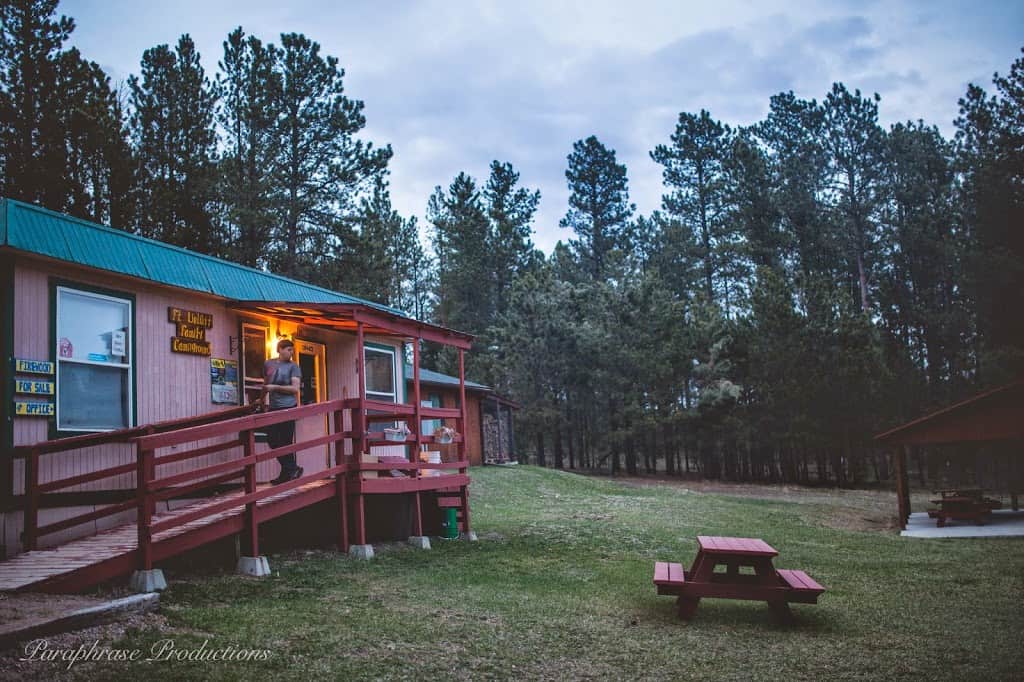 Also, this campground has a shower as well!  There’s just a couple bathrooms and the toilette, sink, and shower are all in the one room.  But there’s just maybe one other family in this entire campground with us tonight, so it really feels like we have the place to ourselves.
Tonight, I made my very first fire all on my own.  Okay, okay, there were tons of pine needles everywhere and I had a battery-operated lighter that I used to set a pile of them on fire.  But I still had picked up enough from watching Nick to know that I had to pile the kindling on little by little, so it’s not completely cheating.  See – tada! 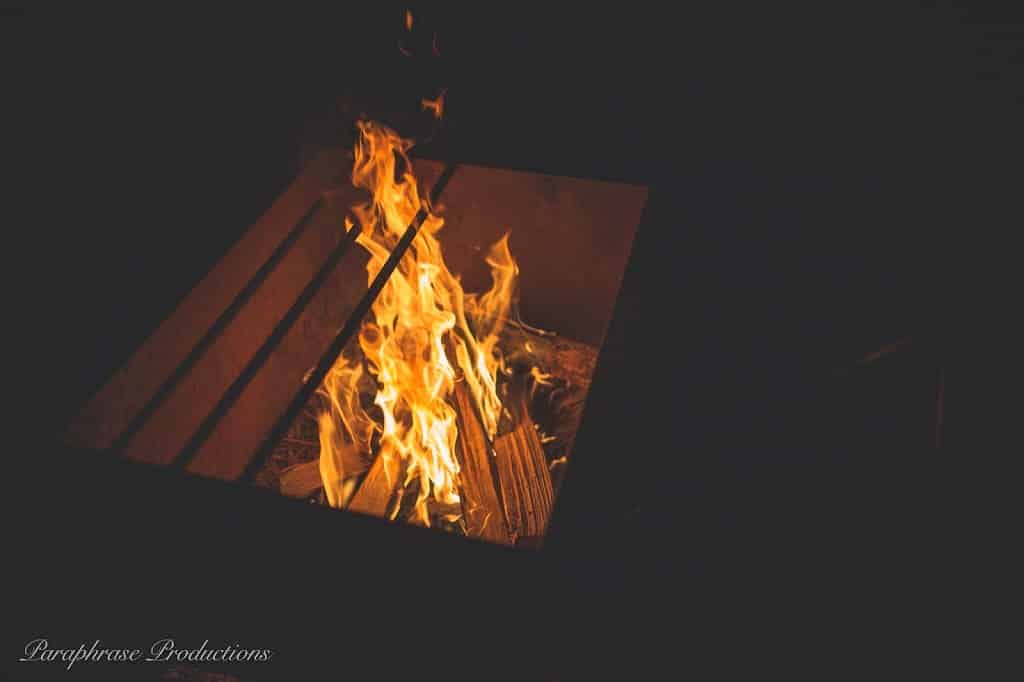 We finished setting up our tent in the dark and cooked some veggies and sausages.  The pic of me flipping them is where I’m completely freaking out because all the grease in the tinfoil is catching fire.  I may have been having a mini melt down, and Nick put aside the camera to come rescue me and flip the rest of the sausages.  Add fear of fire to fear of heights. 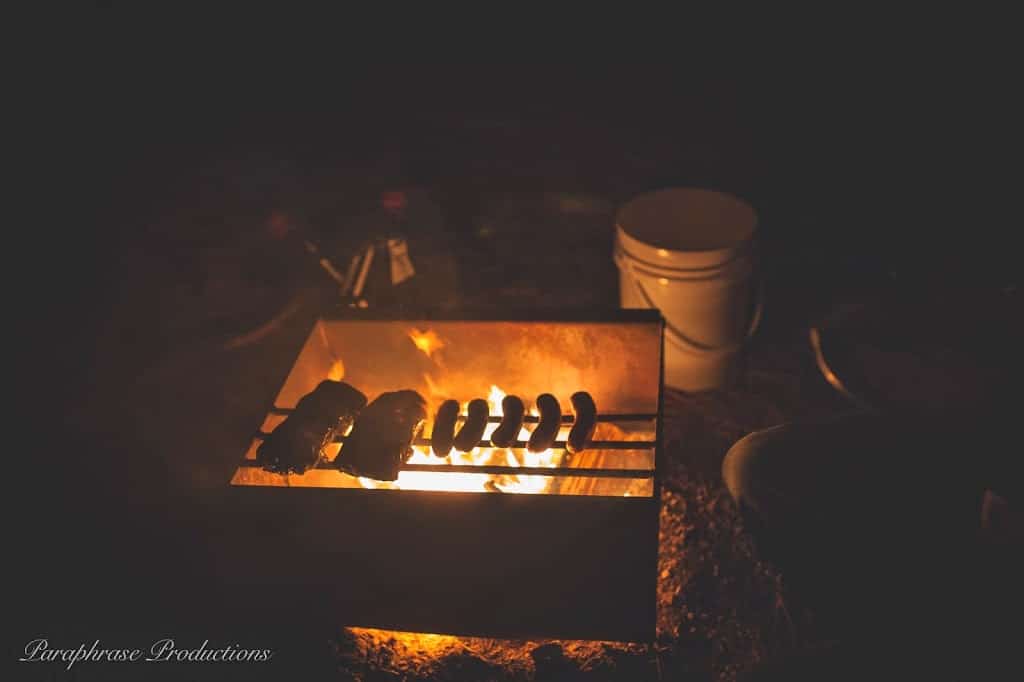 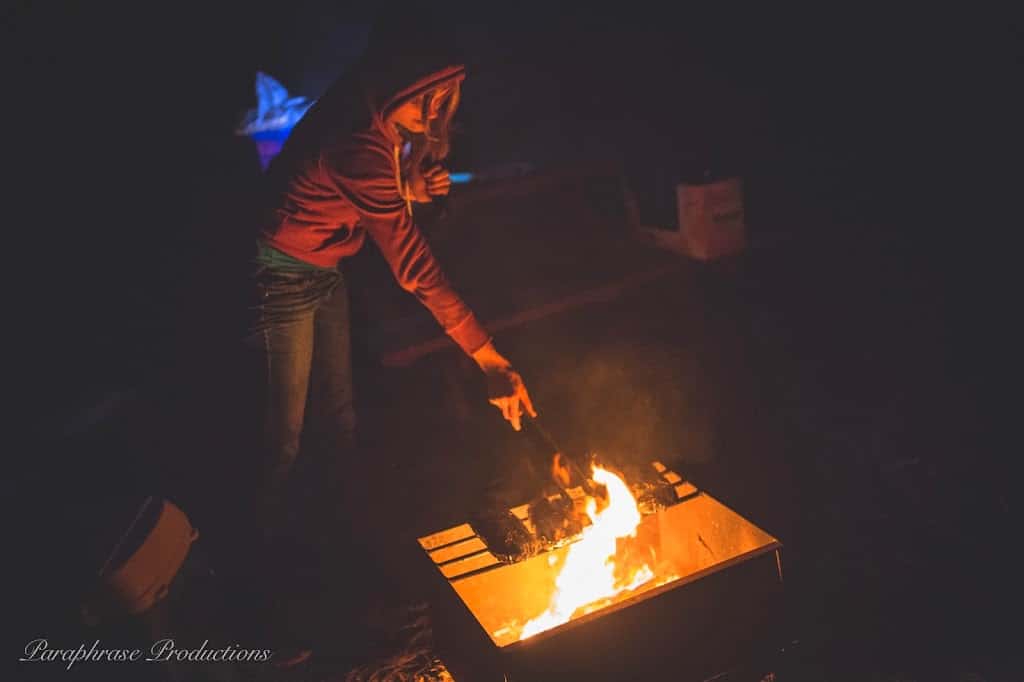 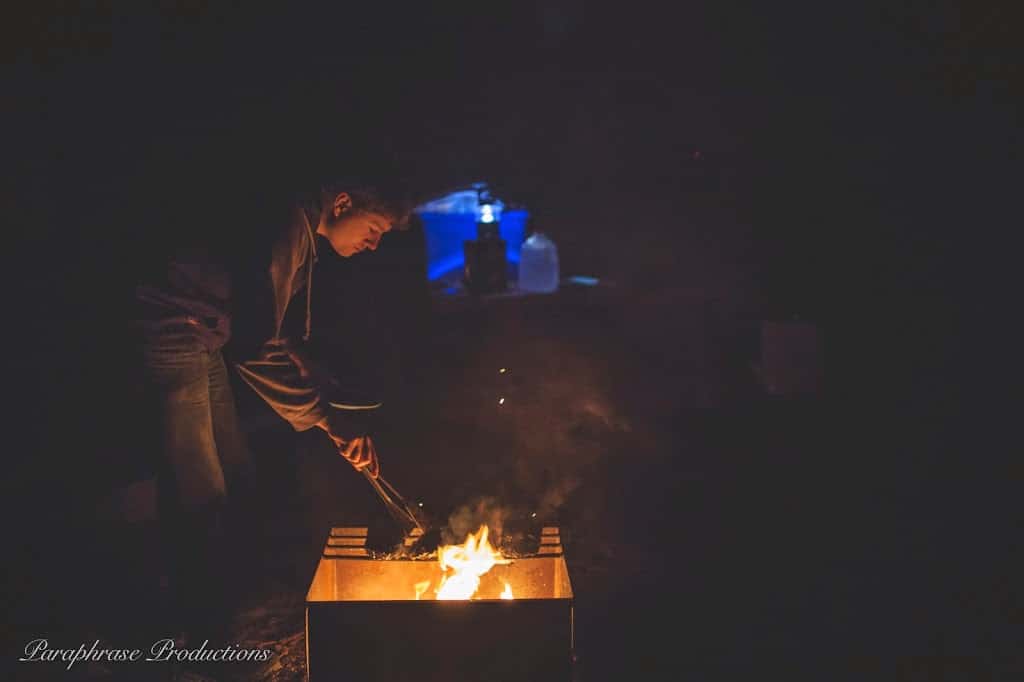 Right now I’m sitting cozied up in the tent amazed that the wifi here is strong enough to slowly upload all these pics!  Seriously, you have no idea how cozy our tent is with this big air mattress and multiple sheets, fleeces, blankets, and feather downs.  I’m also so thankful that Nick put a tarp over our tent “just in case” because the rain is beating down on our “roof” right now.  The air keeps peeling with thunder claps and lightening flashes keep illuminating the tent walls as I type this.  Neither of us has camped in the rain before, and so far it’s pretty awesome!  (As long as it’s done before I have to try and make breakfast outside tomorrow morning!).

Now, we are on the last three chapters of our story-on-tape before we begin the second book, so I’m logging off and burrowing under the blankets to listen to that and the storm outside.  Good night!