I know a few people have asked me to blog about our massive road trip adventure while we are on it, and I’ll do my best!  We are staying with some awesome people tonight (friends of friends) and are using their wifi.  We also bought an American SIM card for Nick’s phone this afternoon so that we have text, talk and data while we travel (under an American number) so I might be able to do some uploading from the car from time to time as well.

We left afterwork yesterday and got to the boarder by about 5pm.  Unfortunately, the website I was looking at was incorrect and we were stuck in a 1-2 hour wait.  We pulled out some pillows and our books on tape and settled in nice and snug while the rain pounded down outside.  I thought it was pretty awesome that almost every iconic symbol on the “Welcome” sign was one we planned on seeing! 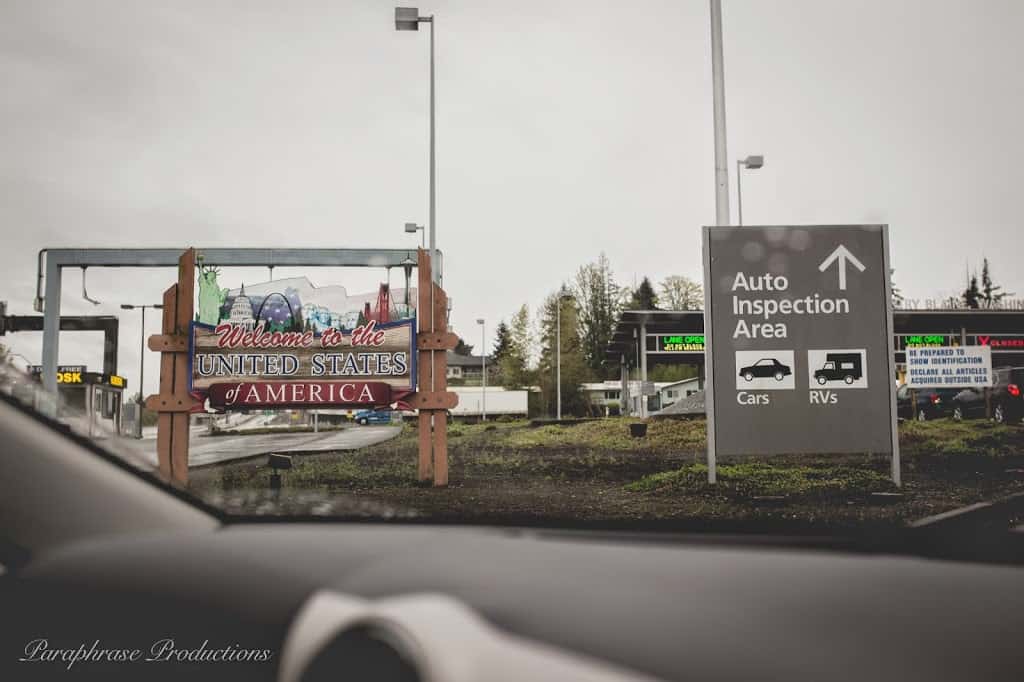 We were greeted by the most cheerful border guard I have ever met who even went out of his way to make small talk with us.  We crossed with no problems and grabbed some quick Subway and filled up with cheap gas.  Unfortunately, we still had a good half-day’s drive down to Portland, so with full stomachs and our story playing through the speakers, we were off.  (We also were smart and brought along some empty milk jugs to fill with water and juice mix.  It seems like a great idea until I tried to spoon the mixture in and dumped sugar all over our new car only 4 hours into the trip!

We continued South in the dreary weather.  As we went I pulled out a book and started reading something to Nick, when he suddenly said, “the sky is getting cool”.  I looked up and he was right.  The entire world was orange and glowing.  It got brighter and brighter and we couldn’t figure out why.  We realized that after the torrential down pour, the sun must be breaking through in some sort of amazing sunset. 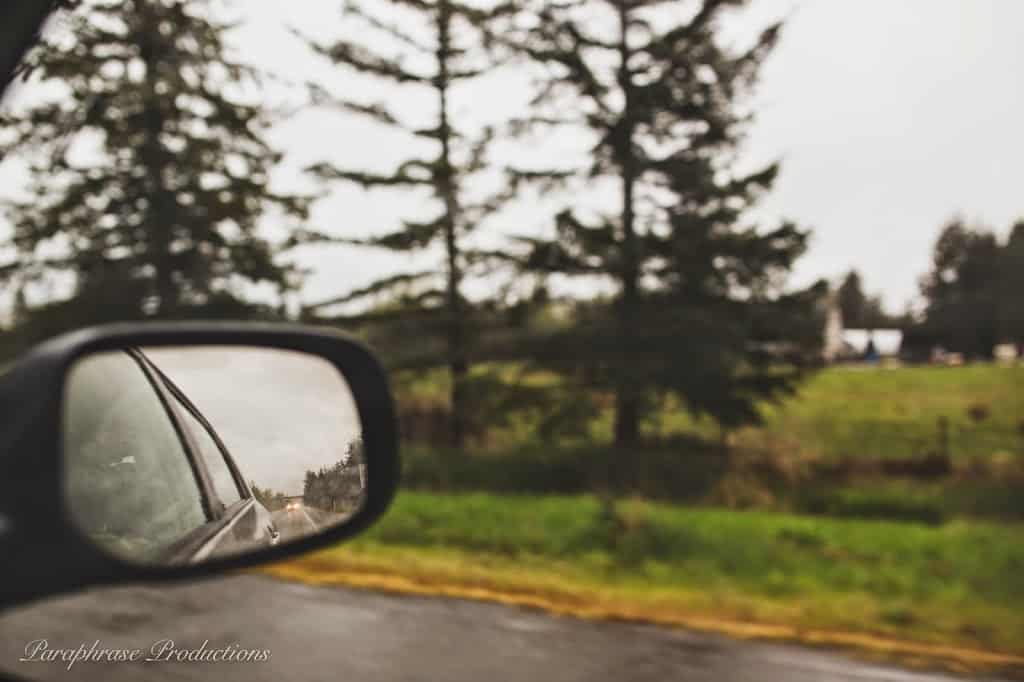 Suddenly we broke out of the trees and were met with rolling fields covered in mist with literally, I mean LITERALLY, the most gorgeous sunset I have EVER seen.  I took a picture, but I promise you it no where NEAR does it justice.  The camera just couldn’t capture the blues and the yellows and oranges the same way.  Or the massive rainbow opposite us.  It was still absolutely POURING outside as we looked for a place to pull off the highway and quickly grabbed our coats and cameras.  This is exactly what I wanted this road trip to be about.  I wanted it to be about having an adventure, experiencing the world together, and taking TIME.  I remember actually thinking to myself the previous week – “I want to take the time to sit and capture all the sunsets that pass me by as I run from one job to the next, week after week”.  How amazing that our very first night we were met with this!  (The subway bag came in handy as I punched a hole through the bottom of it and slipped my camera inside after realizing how dangerously soaked it was getting along with me). 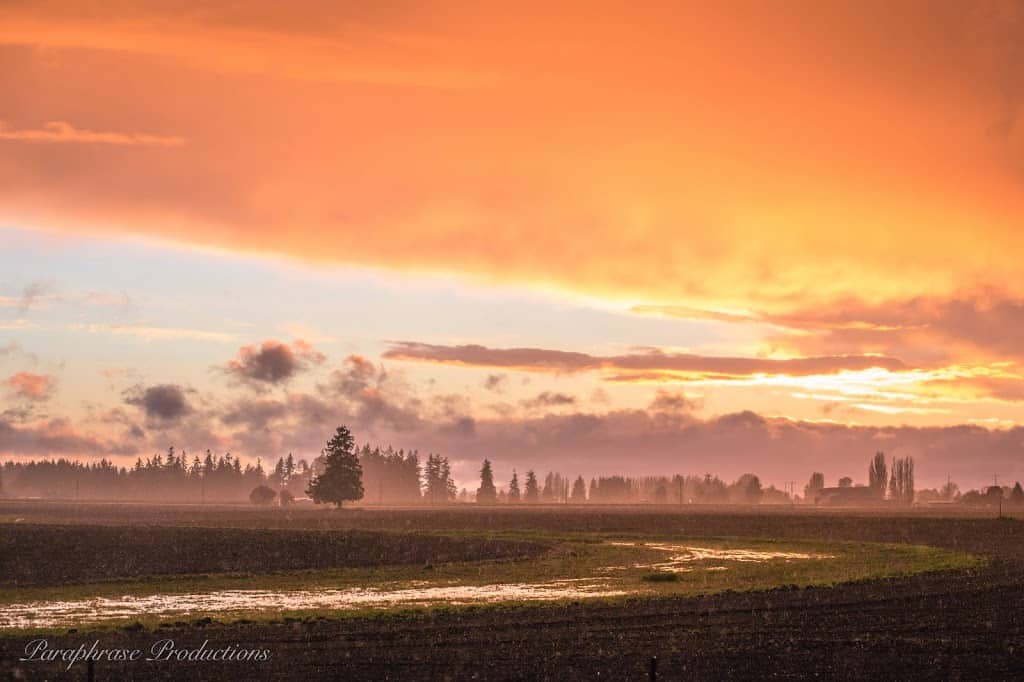 We piled back in the car and it took a good couple hours to dry out after that.  You can’t tell because I cleaned it up a bit, but the photo above had quit a few rain drops all over it from my lens getting soaked.

Nick drove on and on into the night, right through Seattle, continuing towards Portland: 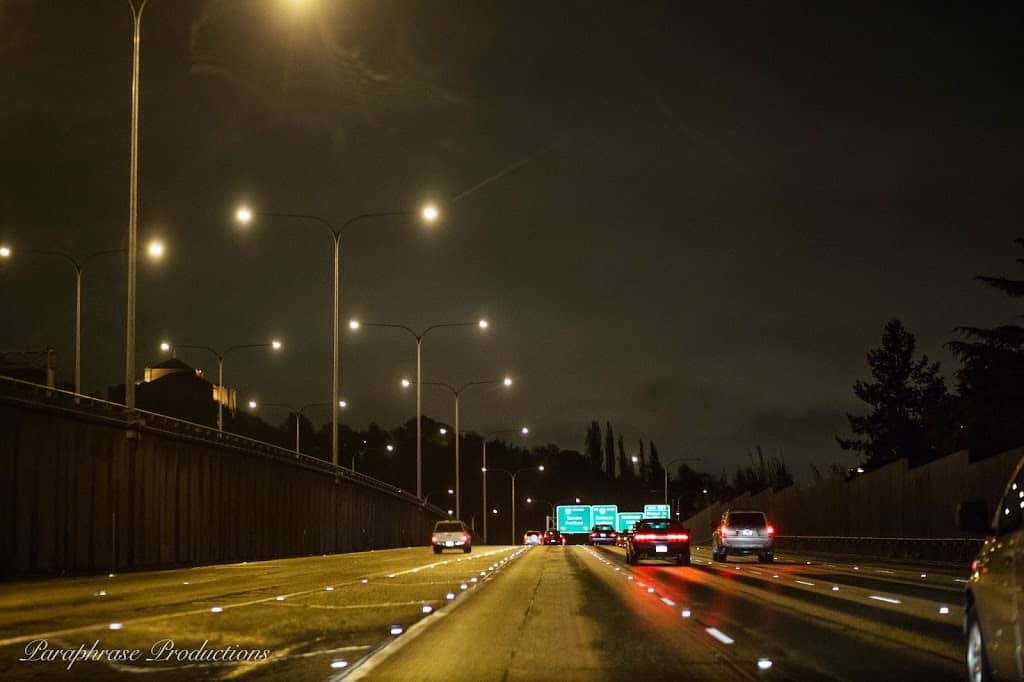 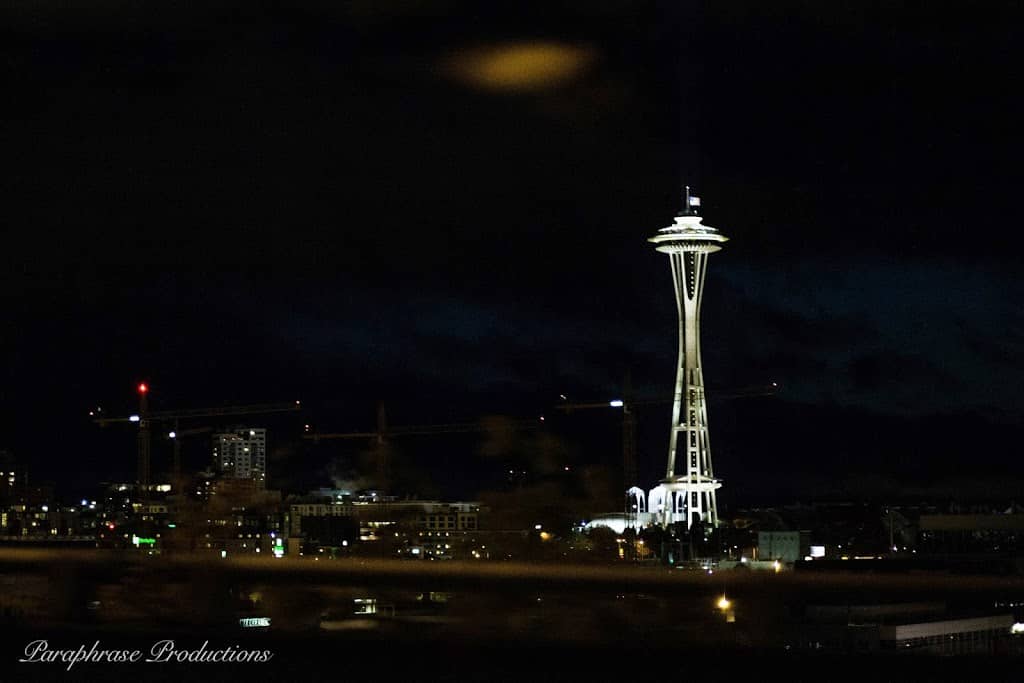 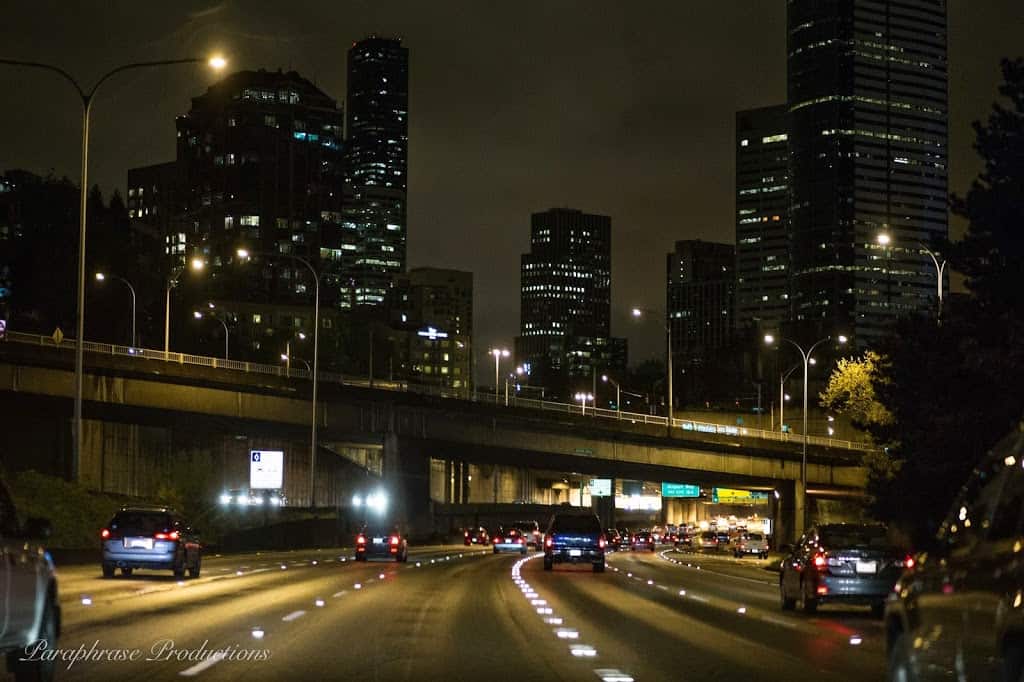 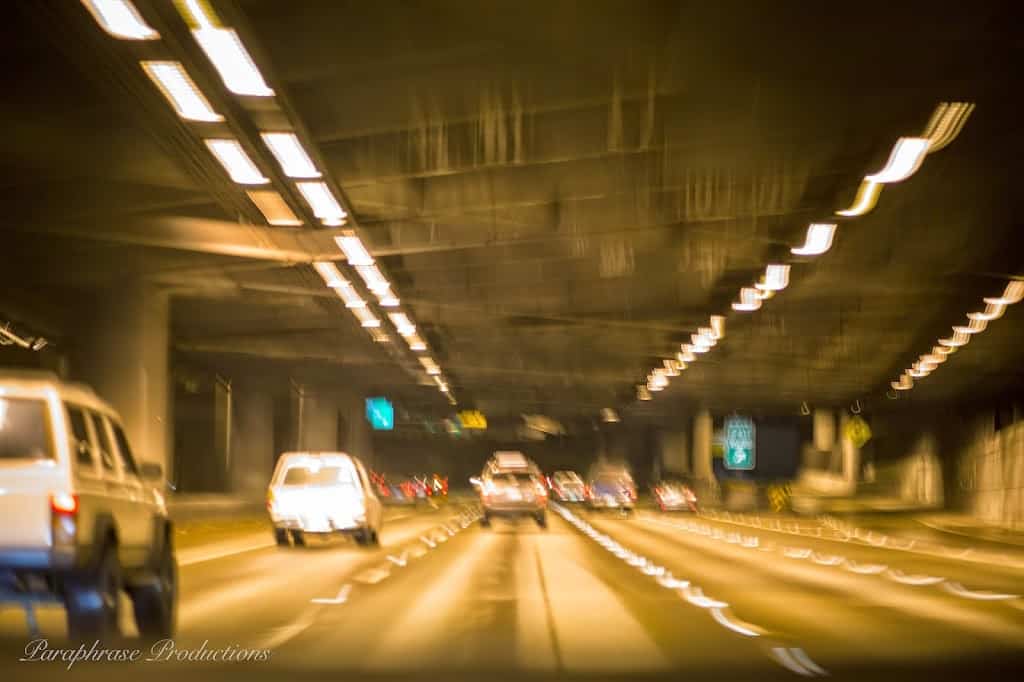 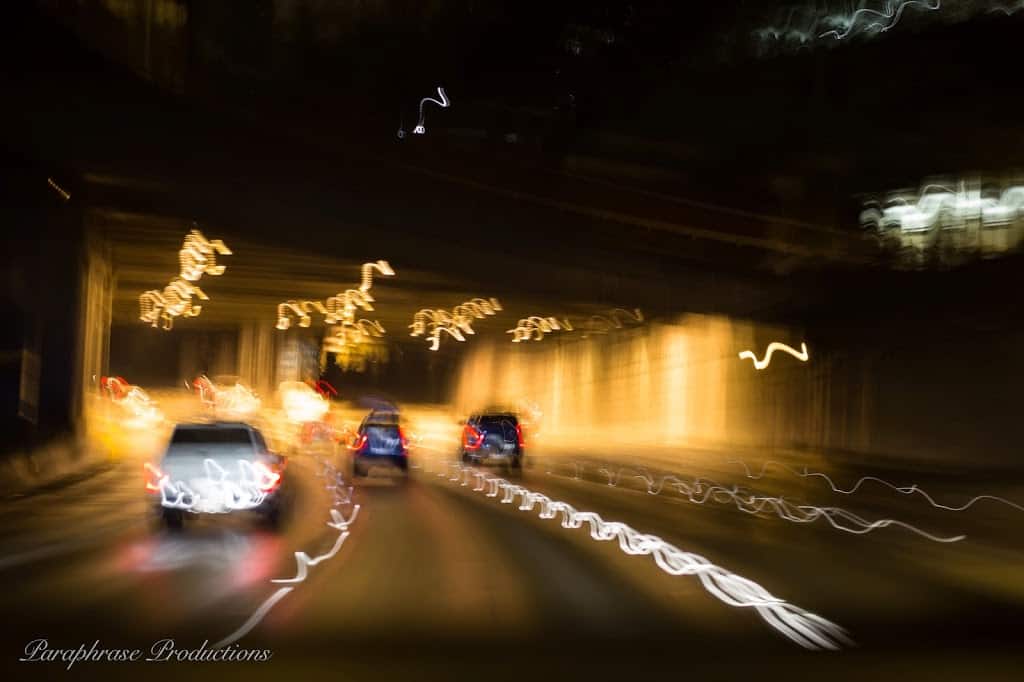 We were pretty exhausted when we finally arrived at our destination just after 11:30pm.  My friend Tara hooked us up with some wonderful friends of hers who let us stay with them that night and are doing so again tonight.  We’re meeting so many cool people.  We even had a lady from the online photography 365 group I run drive up to Portland and have dinner with us today so we would meet in real life.  I have to say, Portland folk are pretty darn hospitable and friendly.

Okay, back to this morning.  We woke up not-so-early after such a late night, but were ready to play tourist.  We were greeted by a beautiful sunny day that didn’t even require us to wear our coats.  I took about 20 minutes this morning to stretch and do my exercises and, while my footwear is still tacky, my feet seem to be holding up so far.  We’ll see how they do as the trip goes on. 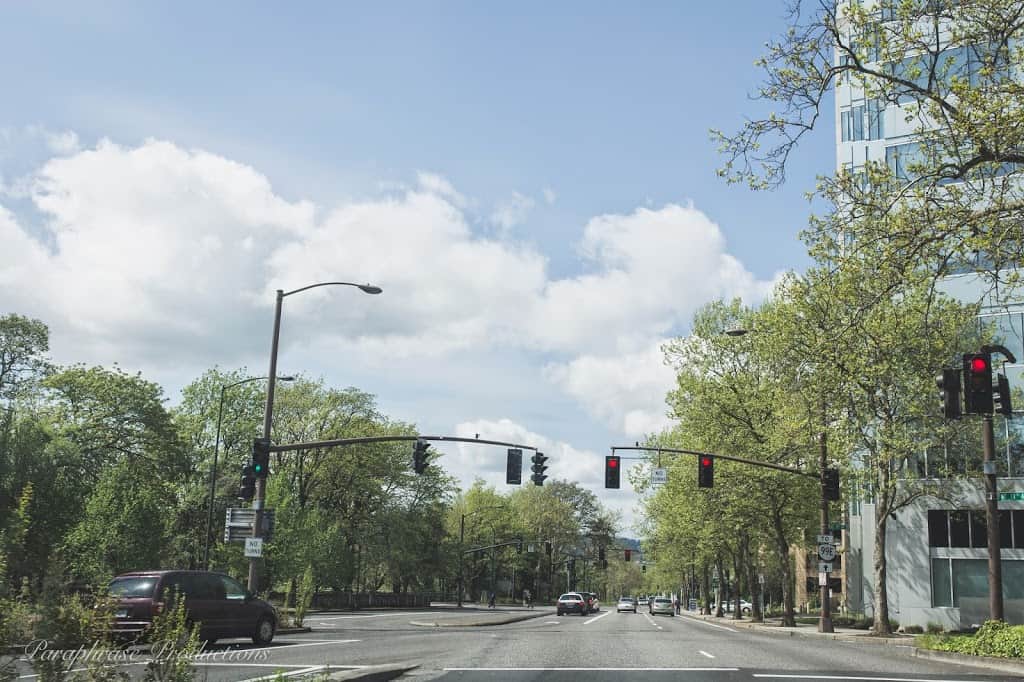 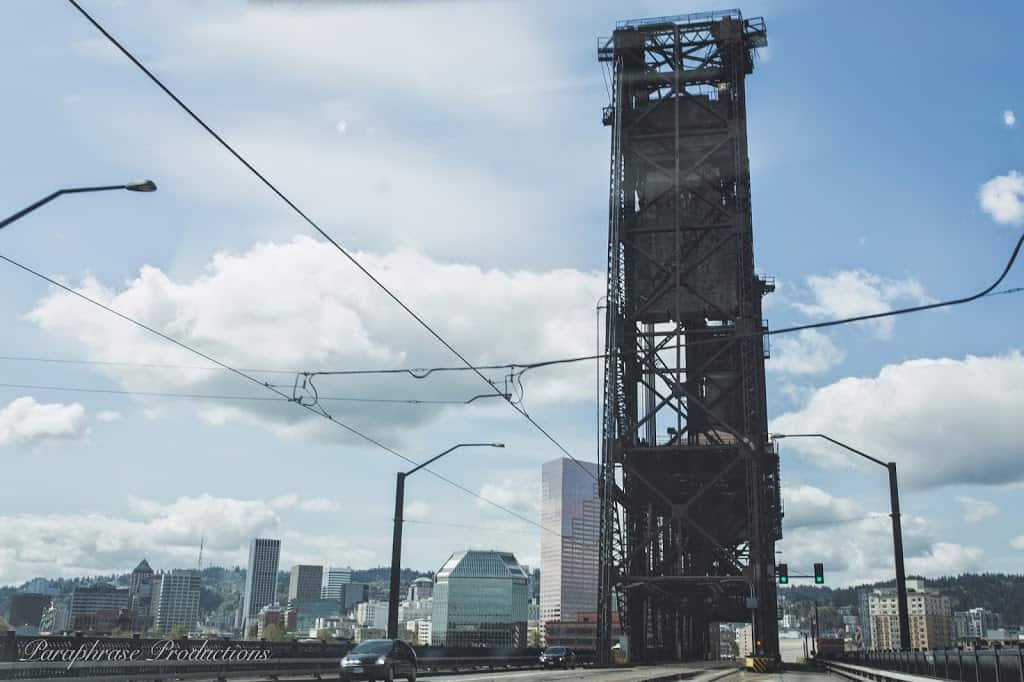 We met up with the lady we’re staying with downtown and grabbed some Starbucks (courtesy of a very thoughtful piano family I teach that gave me a $40 Starbucks card just for our trip).  We walked over and explored the famous Powell’s books.  Nick was in his glory and is curled up with a book beside me as I blog right now. 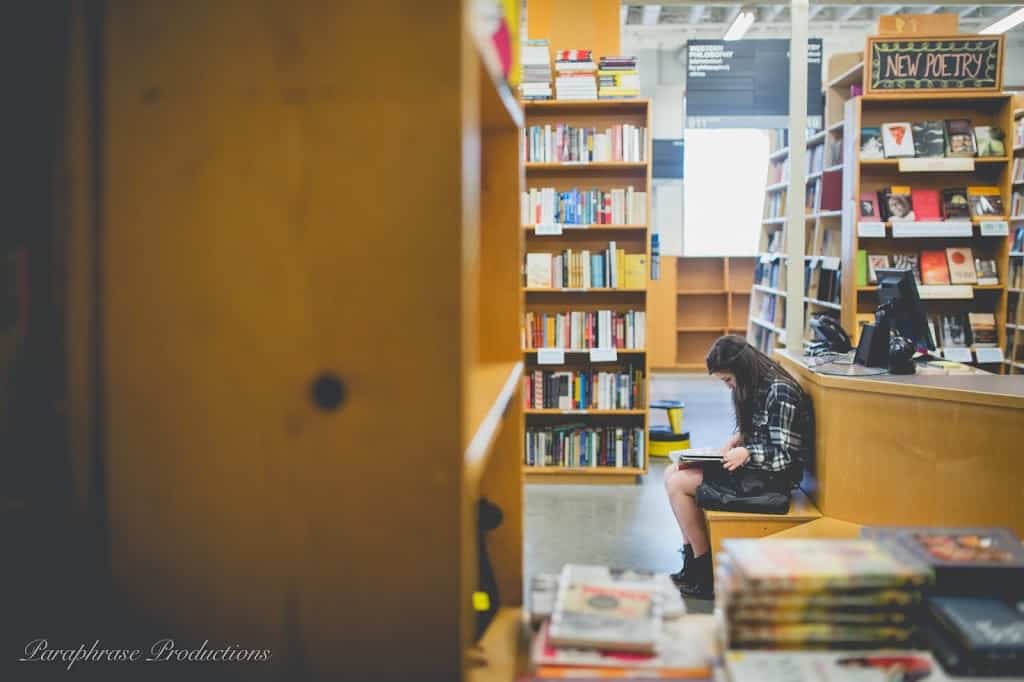 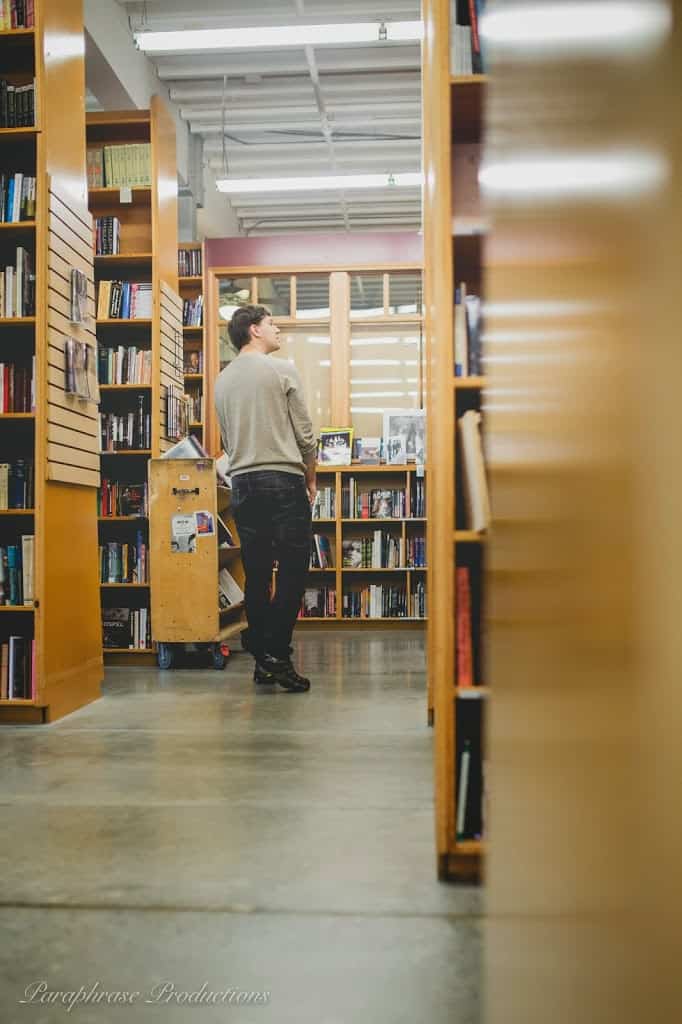 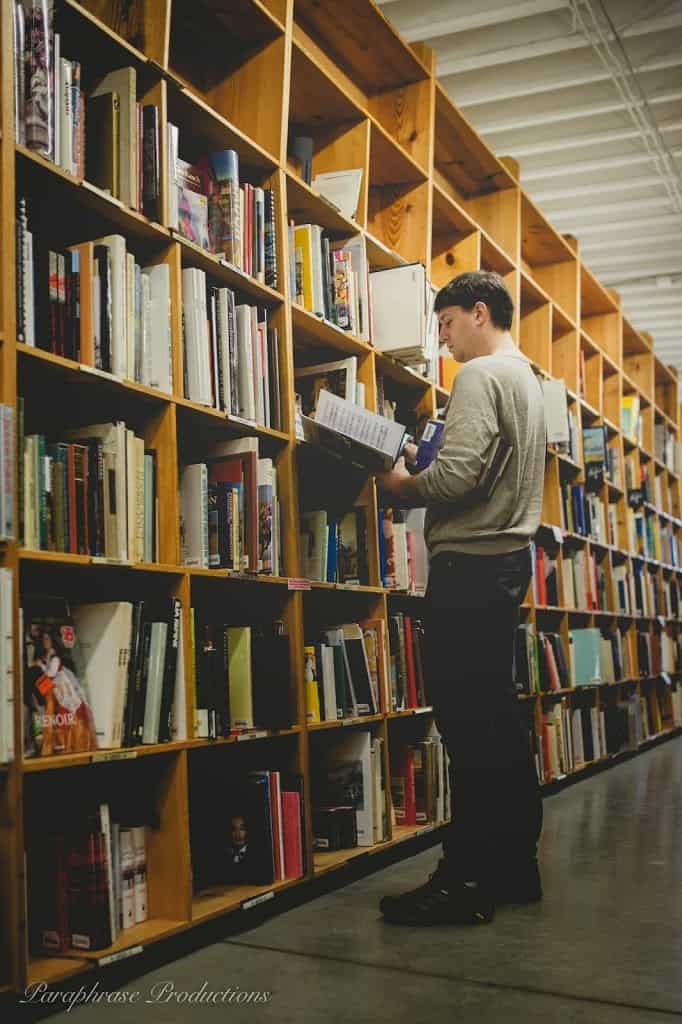 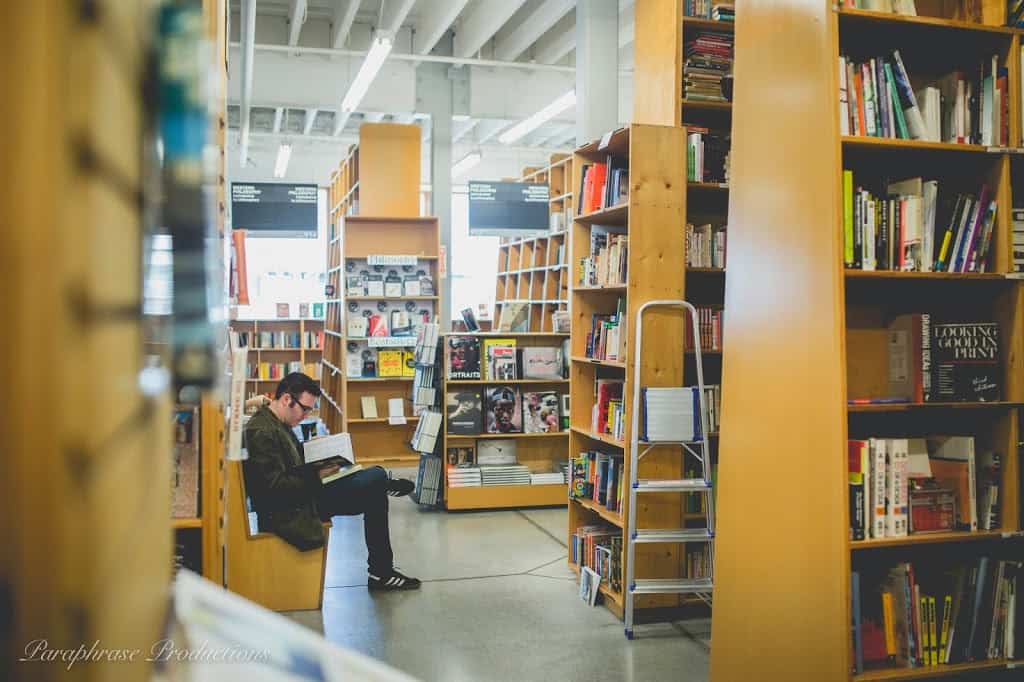 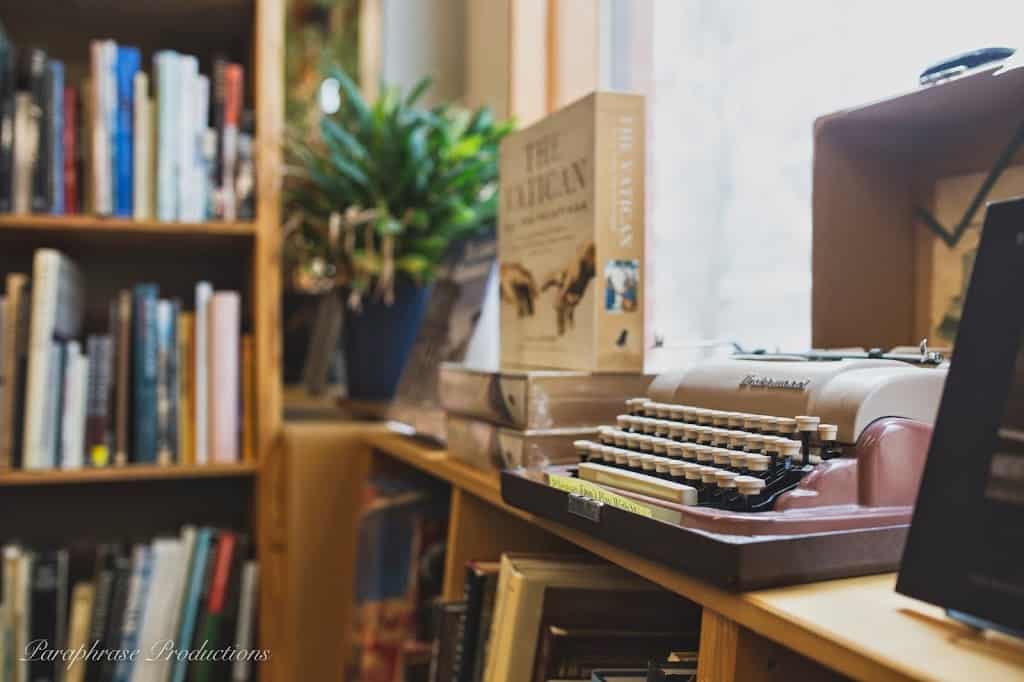 Next we walked down to the also famous “Voodoo Doughnut” shop.  I really didn’t want one, but we couldn’t pass up seeing what was causing people to literally line up for almost half the block! 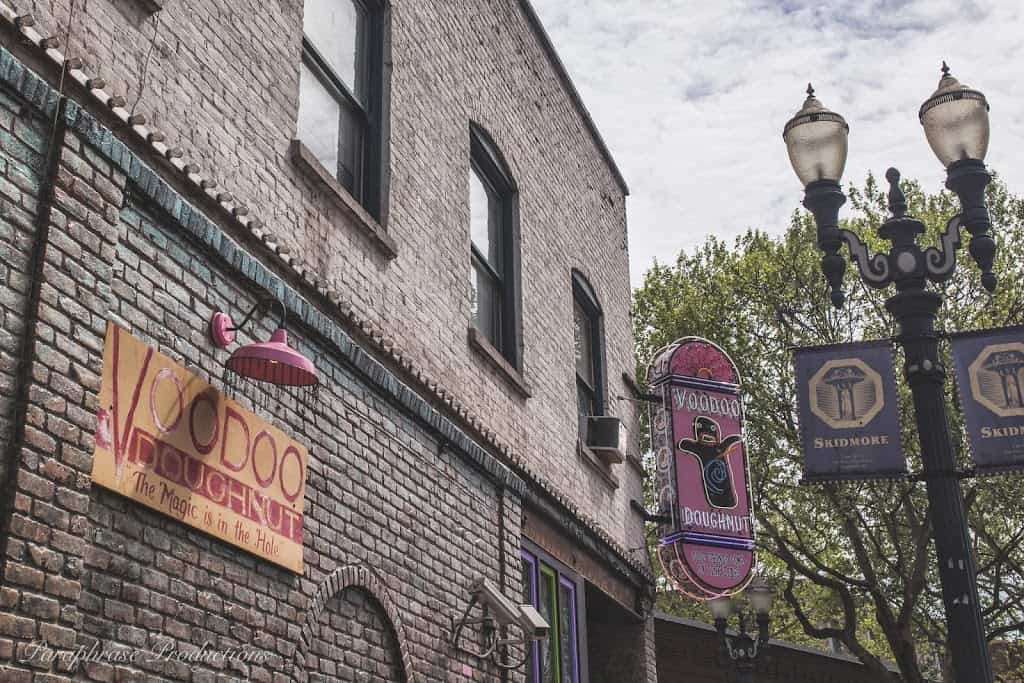 Nick picked out one of the “tamer” flavours and went with Oreo. 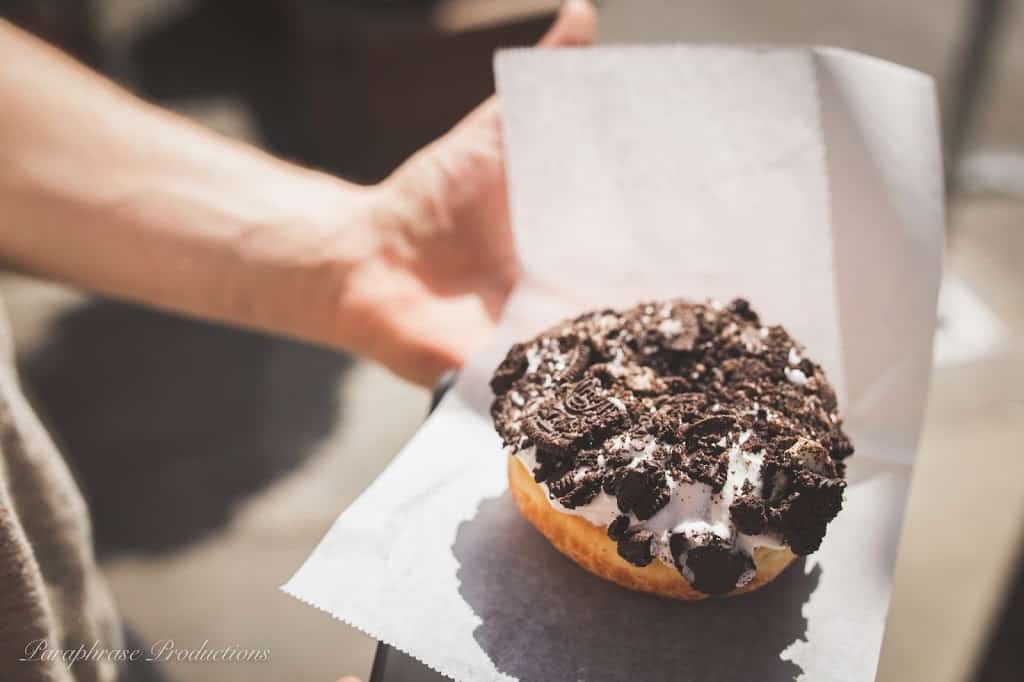 Next we drove across town, picked up a few things, and spotted a lovely park.  We, of course, had a car full of snacks and blankets, so we loaded up and went to lay in the sun for a bit.  We hot-spotted our computer (with the new data plan we picked up for our time in the States), and booked our hotels in LA for next week since we had some time to do a bit of deal shopping.

Then we met up with a photography online friend for dinner, and later met our hosts at a little pub that had the walls lined with books and games.  We played a few rounds of Munchkins and then headed back to the house to relax (and blog, obviously!). 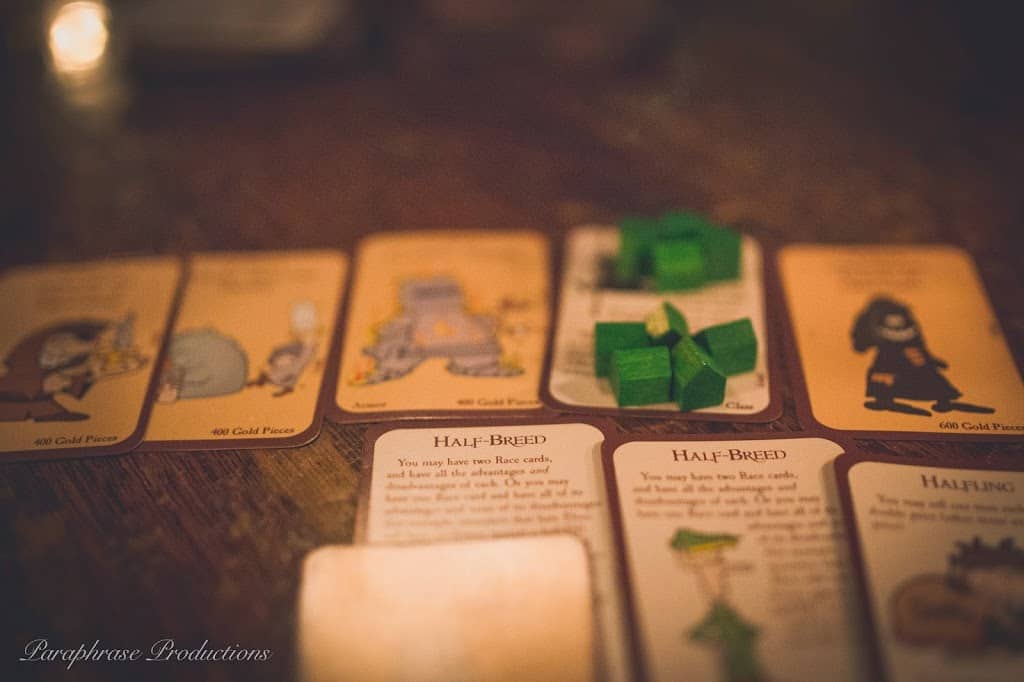 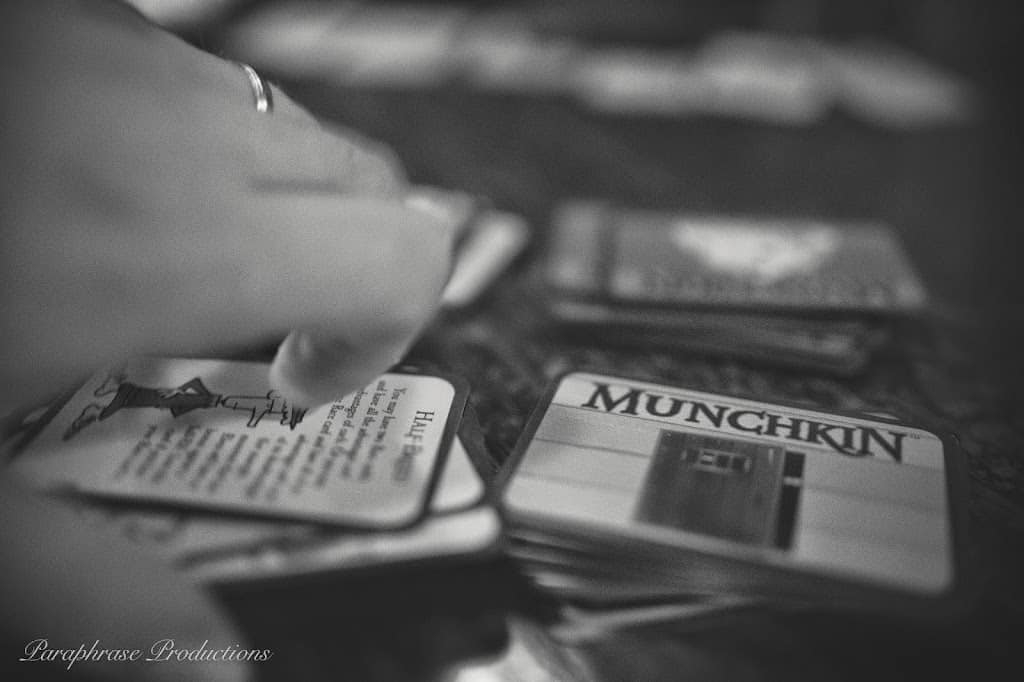 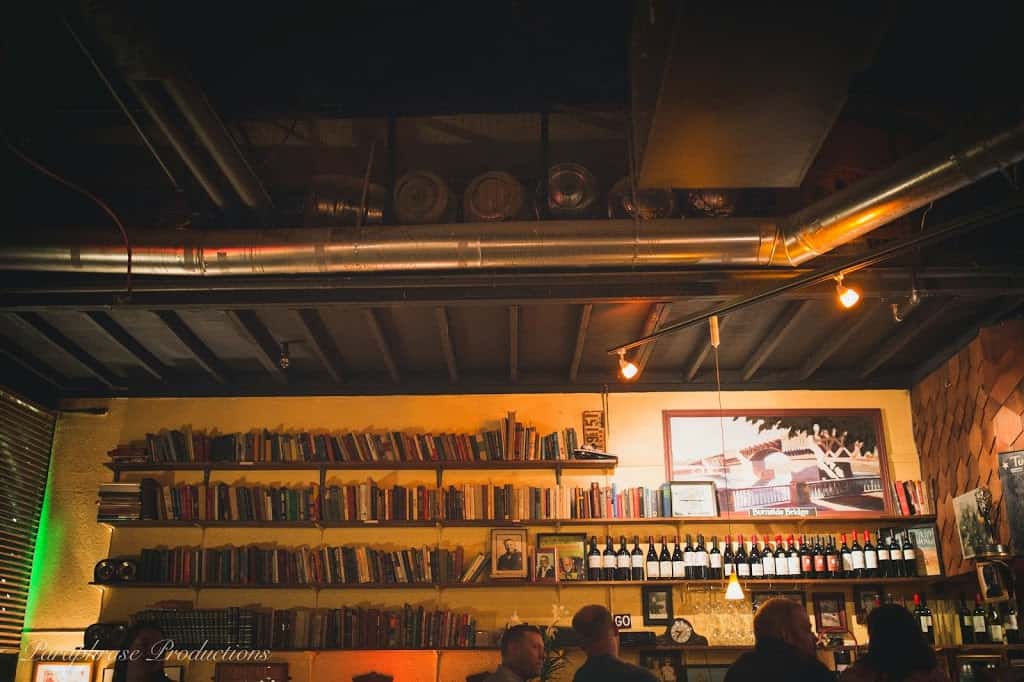 And now it’s almost 1:00 in the morning again (for the second night in a row) and everyone is heading to bed, so I think I’ll do the same!  Good night!